Xbox Live Games With Gold for May 2019

The end of the month is approaching, and you know what that means! It's time to see the Games with Gold titles for May 2019. As usual, we will be seeing four games become free-to-play and download for Xbox Live Gold members - two are Xbox One games, and the others are Xbox 360 titles. All four of the games will be playable on the Xbox One family of consoles.

This month, games like Marooners, The Golf Club 2019 Featuring PGA Tour, as well as Earth Defense Force: Insect Armageddon and Comic Jumper. If you don't own Xbox Live Gold and would like to, you can currently buy a month's .

Below, you can find all four free games for May accompanied by a brief description from the Xbox Store.

Play a wild mix of fun party games as the action regularly switches back and forth between games. Can you handle the switcheroo chaos? Join your friends both on the couch and online while sadistically laughing at their misfortune, or come back to haunt them if you die. Run, jump and slap your way to victory! 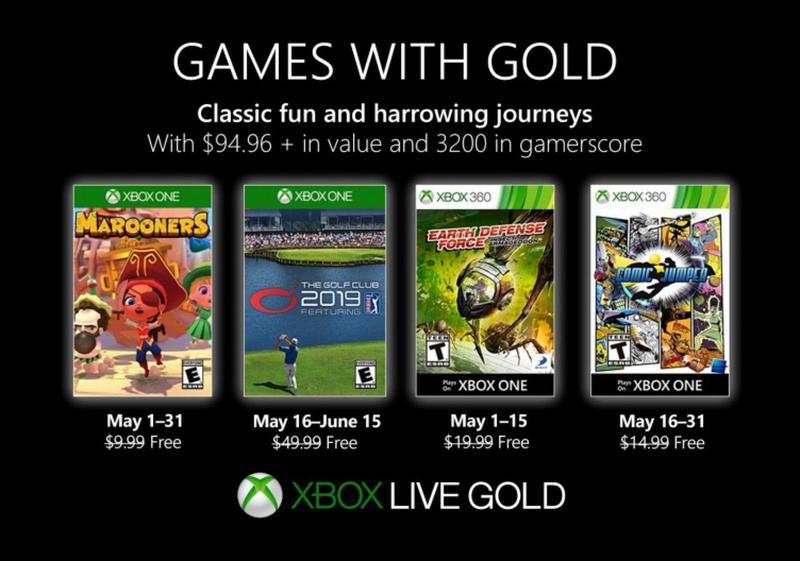 Compete in the all new officially licensed PGA TOUR Career mode. Play on famous courses like TPC Boston, TPC Sawgrass and more. Show off your skills as you take part in PGA TOUR events such as the Shriners Hospitals for Children Open, the John Deere Classic and the Waste Management Phoenix Open. Take on Career Rivals throughout the season for that extra challenge and promise of reward.

The bugs are back to terrorize earth, and only the Earth Defense Force can stop them. Destroy these monsters at all costs, even if it means turning an entire city into rubble!

After his comic book fails, Captain Smiley gets bought out by Twisted Pixel Games and is sent to do work-for-hire, leaping into other comic books to fix their problems. Comic Jumper is the latest creation of the minds behind the award-winning Splosion Man and The Maw.

Each of the above four titles will be available to download for free as part of Games with Gold in May 2019. You'll be able to find them on the Xbox Store via the Games with Gold hub on Xbox One and Xbox 360. Those on the latter can still add the Xbox One games to their digital collection, but naturally, they can only be played when the user upgrades to an Xbox One console.