How To Play Minecraft VR on Oculus Quest

With that out of the way, let’s take a look at what you can do to play Minecraft on Quest.

To play Minecraft on Quest, you need two things. An Oculus Link Cable. And a PC that can handle VR.

You can use the Oculus Link cable to play Minecraft Java Edition and Minecraft Bedrock version with the correct setup. Oculus Rift, along with Oculus Quest, represents the best way to experience any supported virtual reality game without experiencing too much motion sickness.

And the best VR game, gameplay-wise, is Minecraft.

Let’s take a look at how you can play Minecraft (and hopefully break blocks) on Quest with all features and services.

Is it Possible To Play Minecraft on Your Oculus Quest 1 or Quest 2?

We will assume that your PC is capable of playing VR games, in addition to you having access to the Oculus Link cable.

This is how it will all work in the end. You will install and run the Minecraft app on your computer. Your computer will send video data to your VR headset. This will enable your headset to display Minecraft gameplay.

All the while, you have to make sure you keep your virtual reality headset connected to your VR-ready PC for the best quality.

Now, for the Minecraft bedrock VR and/or Java version of it, you will have to customize the setup process a bit. You must have one of these versions installed on your Windows machine. If you don’t have any version, then you’ll have to pay to get them as none of the versions are free.

Which Minecraft Versions Can I Download And Connect to

These are the editions for you if you want to play Minecraft in VR on a desktop computer or a powerful enough laptop.

This edition is also known as the Bedrock edition. To buy it, you have to go to the official Microsoft Store. Create an account there if you don’t already have it, sign in and then purchase it.

The Bedrock version comes with VR capabilities enabled. Hence it is relatively straightforward to set it up and get it running.

Just keep in mind that out of the box, you can’t mod this version like you can mod the Java edition.

Many consider the Java edition of Minecraft to be the original one. One of the benefits of using the Java edition is mods. You can use free mods that will enable the game to deliver a much richer world, depending on your user settings.

The only problem is that the installation process can become difficult.

To get started with Minecraft Java edition on Oculus Quest you need,

There is a chance that you might already have the applications mentioned above on your machine. In that case, all that remains is for you to set these up in the correct order. Setting these up properly can allow you to mine bricks with nothing but your controller movement.

How to Play Minecraft Edition on Oculus Quest

Our guide will work for Quest 2 as well if that is what you are after. As far as the VR experience is concerned, you will find it easier to work with the bedrock edition compared to the java version.

We have already mentioned that in the case of the Bedrock edition, you only need:

You will have to connect your Oculus headset with your computer via the Quest link cable.

Here are the steps you need to take. 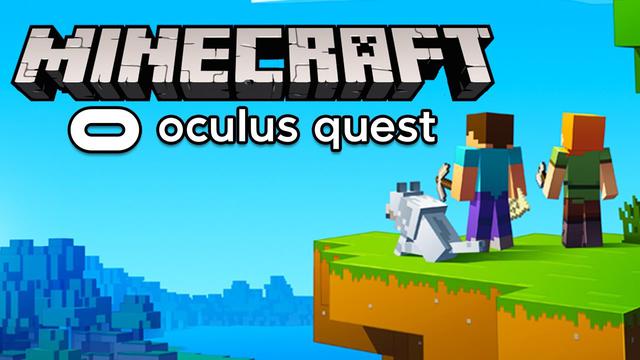 After you have bought your copy of Minecraft from the Microsoft store, you need to install it.

This part should be very straightforward if you have installed anything on your computer, ever.

Again, a very straightforward step where you only have to launch the official Oculus app on your desktop machine.

From the Oculus App, use the search function to find Minecraft. Once found, click it.

You may also click the Free button if it is available. But keep in mind that the app that comes for free only allows users to run Minecraft Bedrock Edition in VR on Quest or Quest 2. It is not the complete Minecraft app.

A simple step you should have no trouble completing.

Step 6: Use Oculus Link cable And Connect Your Quest With PC

You need to complete this step to get that visual feed from your desktop computer to your Quest.

From your VR headset, you should see an Enable button. Select it.

Step 8: Use The App To Locate Minecraft

Once you complete step 8, the Minecraft Bedrock version should launch in VR.

Before moving to the actual steps, make sure you have these three items installed on your VR-ready computer.

Now we’ll talk about how to play the Minecraft Java version on Quest.

From the new page, download the latest available edition of Vivecraft.

Once you click it, you should be able to get it on your computer.

You should have the Oculus app on your machine. Run it.

Step 6: Try Connecting Your Quest With Your Computer Via Quest Link Cable

And then put on your VR headset.

You can find it in your Steam Library. Once found, hit the Launch button.

Your headset should show you the interface for Steam VR. You should also see an icon in the shape of a monitor towards the bottom right of your VR screen.

This step only applies to those who have multiple screens.

Choosing the wrong option will result in Minecraft not showing up somewhere inside your virtual desktop.

Once you launch Minecraft, you should see a selection menu. Pick Vivecraft from that menu.

The green button for Play will appear in the center of your screen.

The screen will show you a disclaimer of sorts. Just put a tick mark in the checkbox, and you are good to go. Hit play.

Once you complete the last step, your Minecraft copy will play in your VR headset.

A simple Google search will tell you the benefits and drawbacks of VR gaming over an Xbox or PlayStation.

VR may not give the same precise controller movement that traditional gaming consoles provide. Still, the increasing popularity of VR games in addition to virtual desktop apps means VR is the future.

Games like Minecraft in VR on platforms such as Oculus Quest deserve at least some attention from anyone interested in a new gaming medium.

We hope our guide has shown you how to install Minecraft, connect all the necessary parts and create a stable VR environment where you can play for long hours after a hard day of work.

Zohair is currently a content crafter at Technologypep and has been involved in the technology industry for more than a decade. He is an engineer by training and, naturally, likes to help people solve their tech related problems. When he is not writing, he can usually be found practicing his free-kicks in the ground beside his house.