How to download games faster on Xbox Series X and S

Consoles, phones, and computers have gotten a lot smaller over the years, but it’s been the opposite when it comes to game sizes. While indie games still take up small spaces on your hard drives and SSDs, triple-A titles like Call of Duty: Black Ops Cold War can require up to 136GB of space on your console.

Storage is hardly ever an issue these days since external hard drives exist, but getting the games on your system can take a lot longer than one would imagine with a poor internet connection. Considering the sizes of triple-A games, you’ll need a stable and fast internet connection if you aren’t looking to keep your console on for a couple of days.

Each district will have different connection speeds. Knowing your internet connection quality’s full details will be essential to see if you’re getting the advertised speeds. Look out for your download speeds while installing any game and run speed tests to see how your internet is performing. Series S owners will want to make sure that they’re getting the best connection quality possible since reducing the games’ sizes through discs won’t be an option for them.

If you’re feeling that your console is downloading games slower than expected, there are a couple of troubleshooting steps you can try out to fix the problem. In the case that none of the solutions do the trick, you may have to give your service provider (ISP) a call. They’ll have access to your logs and will be able to tell whether you’re having a connection issue that can only be fixed by them.

Here’s everything you can do to make sure that your Xbox Series X or S is getting the advertised speeds of your internet plan.

Check out the details of your internet plan

Hop onto your PC, laptop, or mobile phone and run a speed test near your router to see the full potential of your connection. If you see values close to your advertised speeds, but your Xbox Series X/S suffers to reach those numbers, you’ll need to do some digging.

Using Wi-Fi is one of the most convenient processes in the world since you will have a stable connection wherever you go in your house. This doesn’t mean that the connection will be strong enough in every room to deliver you the full potential of your internet, however.

The further you are from your router, the worse your connection will get. If you’re living in a house with thick walls, then your signal quality will suffer drastically between rooms, reducing your internet speed.

Try connecting your Xbox Series X/S to your router with an Ethernet cable. If you get faster speeds and a more stable connection, it’ll mean that the problem was your Wi-Fi all along. 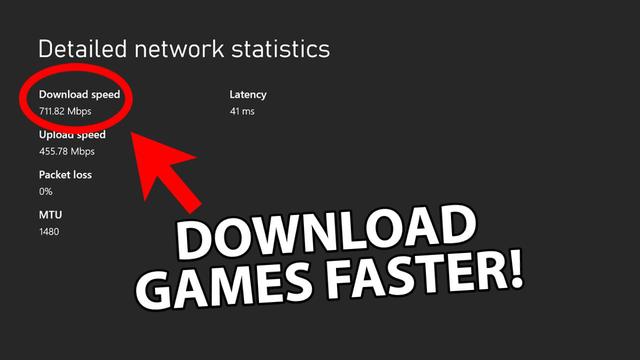 Using a cable may not be an option if it requires you to drill a hole into your walls. If you’d like to avoid having a 10-meter cable trailing around your corridors, you’ll need to place your Xbox Series X/S and router closer. You can do this by moving your console, router, or both.

If other devices around your house are experiencing slow internet alongside your console, it may have something to do with your connection. While ISPs do an excellent job of keeping your internet connection stable, you may find your connection routing from a faulty server, reducing your download speeds.

The best way to troubleshoot this problem is by resetting your router. Doing so will allow you to restart your connection from scratch and allow you to establish a new route with your ISP. We also recommend resetting your Xbox Series X/S and any affected electronic device in the process to make sure you get a completely fresh start.

Make sure that your connection isn’t clogged

Anyone who lives with a housemate or family will know that someone trying to stream a movie at 4K resolution will suddenly cause you to lose all of your bandwidth. Routers are designed to prioritize more urgent download attempts, and this can heavily hurt your download speeds on Xbox Series X/S.

You can start by asking anyone who you’re suspecting of using a lot of bandwidth. If your problems are resolved once they stop doing whatever they’re doing, it means another user was clogging your bandwidth. Since asking them to stop won’t be ideal every time they do similar things, you can try out limiting their available bandwidth or kicking them off your router.

This process will be different for each router brand. Your usual manual should have a section explaining this. You’ll need to find their device on your router’s user interface and set up a bandwidth limit for their connection. This will prevent your router from dedicating all of its resources to them, allowing you to keep the majority of your bandwidth.

Bandwidth cloggers may not always be people—it may be background applications. Check your phone for any apps trying to run or check something in the background since continually doing this can strain your connection.

If you don’t know what you’re doing, just turn off Wi-Fi on all the devices around your house apart from your Xbox. That’ll make sure that your console will have all the bandwidth to itself.

Ensure that you don’t have any other downloads on Xbox and even restart Xbox Series X/S to make sure there isn’t an unexpected bug holding your speeds back.

Keep your Xbox Series X/S up to date

Each Xbox update brings stability upgrades to your system, and outdated system files can be the reason behind your lackluster download speeds.

Press the Xbox button to bring up the guide menu.Get to the Settings through the Profile & System menu.Head over to Settings and click on Updates.You’ll be able to click on Update if there’s one available, but you should be fine otherwise.

Consider upgrading your plan and contacting your ISP

If you don’t have a fast connection to begin with, none of the methods above will be able to increase your download speeds. Upgrading your plan will always be the prime way of getting better internet, but it may not always be the case.

Before you pull the trigger on an upgrade, we strongly recommend asking your ISP whether your infrastructure and router would be able to support your upgraded plan. If the answer is no, upgrading your plan won’t be able to help your case.

This can urge you to take the necessary steps to improve your house’s internet infrastructure, however. Most ISPs will do this for free upon asking, but you can also call in a professional to level up your cable game. Better cables delivering the internet to your house will mean that you’ll have a higher quality connection flowing through your house.

In any case, your router fails to support your new connection type, you can either ask your ISP to assign you a new one or shop online to find the best one for your needs.

In sporadic cases, you may experience slow download speeds due to flooded servers. Trying to download a game during its launch day is the best example of this, and your speeds should get back to normal when the download servers catch their breath.

There isn’t anything you can do to fix a server-related problem, but resetting your router and Xbox can still help you by tiny margins.

The post How to download games faster on Xbox Series X and S appeared first on Dot Esports.

Continue Reading
Tags： do xbox games download when the xbox is off
Latest： Windows 10: How to disable the new News feed - The Click
Next： How to Build a RetroPie Raspberry Pi Retro Game Console ...
Popular Articles/span>