What Exactly is Soulja Boy’s New Video Game Console? | The ...

Soulja Boy really wants to sell a video game console. This is not a market that is particularly easy to enter. Even Sony has been struggling in that area recently as Nintendo and the super popular Switch are dominating the market.

There is one segment of the market that’s wide-open, though: retro handheld devices. If you’re not familiar with the euphemism, retro handheld devices are essentially consoles made out of cellphone CPUs that run a bunch of emulators of old systems, basically anything older than the N64 and Sega Saturn, though some of them can run PlayStation and Dreamcast games. They’re all pretty cheap, with all but the highest-end models being under $100 and they’re of questionable legality when they’re sold with ROMs, pirated digital copies of video games.

I have one myself, it’s called an RG351P, which is about as creative as the names of these things get. The RG351P looks similar to a Game Boy Advance, coming in the same color and the same size screen, just a slightly different shape and more buttons and thumbsticks for compatibility with more game systems.

The systems have actually come a long way since the last time Soulja Boy tried selling them and got in trouble with Nintendo for including ROMs of Nintendo games on them.

So let’s talk about the system that Soulja Boy is selling now and hyping on his Twitter to his remaining fan. 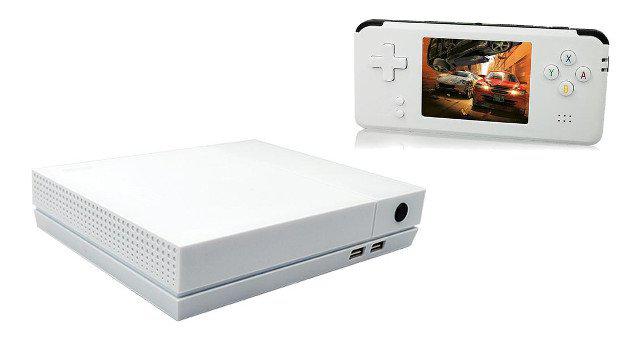 If you take a look at the website, you’ll see a system that looks like an old-school Game Boy but with more buttons on the face. It also looks like an existing retro handheld called the Powkiddy A19. And I mean exactly like it.

It does appear to have slightly different internal specs and it has a touchscreen, but you’ll also notice it’s $200 and the Powkiddy A19 is about $80. It also doesn’t appear to come with games, he’s learned his lesson, he’s just saying it’s Android-based so you can play all the games you can already play on your phone.

With only six action buttons and one thumb pad, it also won’t be able to take advantage of those upgraded specs. This system isn’t playing anything after the 16-bit SNES and Genesis era. Basically any retro handheld will play those, even the cheap $30 ones.

Soulja Boy appears to be drop shipping these consoles, so they’re still basically coming to you from China. It’s not something he designed and made himself, it’s a Powkiddy handheld with his custom artwork on the shell. Powkiddy devices are not known for having the best build quality. I bought the device I did primarily because of the high build quality, it plays like you’d expect a handheld to play while reviewers consider Powkiddy’s stuff to have lower-quality buttons and thumbsticks, so they’re not as responsive and nice to play, though they work just fine.

For the $200 Soulja Boy wants (an over 100% markup), you can just buy a Vita or a New 3DS XL with cash left over, and both of those can be pretty easily modded to play retro games and will also play Vita or 3DS games. You can also buy a Switch Lite for that price.

Basically, if you didn’t learn this the last time Soulja Boy sold a game console, you should avoid Soulja Boy’s game console. You can get a retro handheld, even one very similar to the one he’s selling, much cheaper if you look around, or you can buy a handheld made by Sony or Nintendo for the same price. Don’t pay this weird markup because it’s being sold to you by a washed-up rapper.

Tags： where to buy soulja boy game console
Latest： Top 10 HOW TO PLAY XBOX GAMES ON PC WITH DISC Resources
Next： Have I Got News For You – Funniest Show on British TV (Video ...
Popular Articles/span>