Throughout the different eras of video game history, certain consoles have defined the way audiences play. The Atari 2600 brought the arcade to the home for the first time, the NES revitalized a cluttered and dying market, and the modern titan companies of gaming are constantly putting out new content.

Related: 10 Most Nostalgic Flash Games From The Early 2000s

However, since the market is open to any competition, there were many more failures than successes. Some consoles were so egregiously bad, either in design or content, that they barely sold at all. Even with a good game or two under its belt, a console needs to stand out in order to succeed. These consoles did not— though there was at least one decent game for each one for any poor souls that got stuck with one of these duds.

The successor to the revolutionary Atari 2600, the Atari 5200 released in 1982 to critical disappointment. While the graphics were a step up from the 2600, the controllers looked like misshapen telephones and barely worked. Also gone was the simple design of its predecessor; the 5200 was unnecessarily bulky, and required multiple cords and boxes to be plugged into the TV.

Its best game is arguably Adventure II, the sequel to the classic Adventure. It had improved graphics, and more varied challenges & gameplay. If only the design improvements in the game had been translated to the console itself, Atari might have stayed in the limelight a bit longer.

Appearing in 2003, just before the PSP and Nintendo DS would usher in an exciting new era for the handheld gaming market, the phone company Nokia attempted to create their own device with the Nokia N-Gage. The console combined a mobile phone and a handheld system, but was really ugly and had no standout games.

When making a multipurpose device, it's important to make sure that the customer is satisfied with both functions of the product, and the N-Gage is lackluster on both ends. It did have a 2D version of Rayman 3 which looked nice and had solid platforming gameplay, but that particular version of the game was also available for the Game Boy Advance anyway.

During the era when the Atari 2600 reigned supreme, the Gakken TV Boy was put forward in Japan as an alternative. Unfortunately, its games were more rudimentary than its then six-year-old competitor. Even its best game, Excite Invader, was just a worse version of Space Invaders flipped 90 degrees.

The kicker, though, was the fact that the joystick was attached to the console itself, meaning that players had to game mere inches away from the TV screen. This baffling design choice paired with the limited and mediocre game library easily explains why the TV Boy never made it out of Japan. 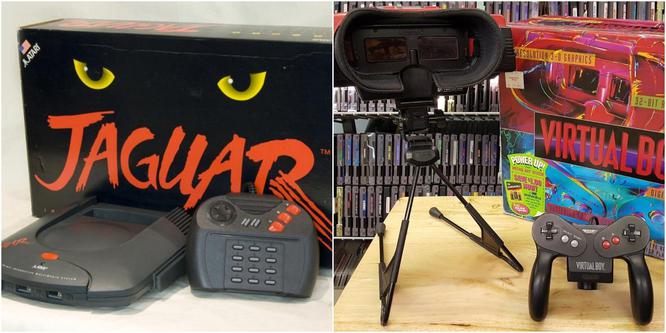 Tiger Electronics was already infamous for their low effort game systems when the Gizmondo hit the scene in 2005, but the sheer incompetence of the Gizmondo's release topped any other failures. Boasting a library of only 14 titles, the console failed mainly due to a lack of flagship games to push sales, as well as the stiff competition it faced from the DS and PSP.

It sold less than 25,000 units, and was labeled by GamePro as the worst selling console ever. It's a shame, because its best game, Point of Destruction, is a fun and unique space shooter that might've found an audience on a more successful platform.

One of the first ever CD based-consoles, the doomed Philips CD-i was released in 1990. It was a failure for two reasons: It had practically no good games, and was extraordinarily expensive at $1,000 upon launch. Most PlayStation 5 scalpers don't even have the nerve to charge that much.

Most of the console's variations also only have one controller port, as they expect the player to connect controllers to one another to play multiplayer. The console's best game is Brain Dead 13, an interactive movie game similar to Dragon's Lair and created by ReadySoft. It's a lighthearted good time, with plenty of unique and comical death scenes to keep players coming back— but it was also released for PC as well as ported to other, more successful consoles.

Another console that failed due to being too expensive, the 3DO released in 1993 to a surprising (initial) critical acclaim. It was named the "Product of the Year" by TIME magazine, but couldn't sell due to a lack of games and affordability. Its starting price of $700 was hefty, and none of the games it really stood out as flagship titles. Sega had Sonic, Nintendo had Mario, and the 3DO had...Gex, which is a decent game, but didn't end up being exclusive to the platform for even a full year.

The 3DO was simply too mediocre to compete in the thriving video game market. Its best game is Lucienne's Quest, an interesting RPG where you play as a magician's assistant attempting to cure them of lycanthropy. It was ported to the Sega Saturn, but only in Japan, making the 3DO the only place to play the game in English.

In 1996, a Steve Job-less Apple released the Apple Bandai Pippin console to the public as a multimedia device. It functioned as a web browser, game console, a computer, and more.

Unfortunately, it was subpar at all of these usually attractive features, and with a price tag of $600 audiences left this piece of gaming junk history in the garbage can. Its best game was Super Marathon, a compilation which included the first two Marathon games, early first-person shooters from a then-fledgling young developer named Bungie that was still a few years away from massive mainstream success with a little game called Halo.

Nintendo's worst console of all time is without a doubt the Virtual Boy. In 1996, virtual reality was starting to become popular in the mainstream media, and Nintendo figured they'd cash in. The Virtual Boy had potential, but the execution was abysmal.

Red and black graphics made extended use sickening and painful and the console had a tiny tripod stand instead of a headband equivalent, which made even seeing the game itself needlessly difficult. Teleroboxer, the game which best uses the console's 3D capabilities, has players manning a boxing robot in a first-person clash with a similar opponent. It was one of only 22 games made for the ill-fated system.

The first ever 64-bit console, the Atari Jaguar was a gigantic flop. It was more expensive than the SNES and SEGA Genesis, and had nearly no standout games at all. Even its claim to 64-bit technology was dubious, as the graphics were the result of a mish-mash of different processes that culminated in approximately 64-bit graphics.

Related: 10 Comic Book Games You Should Stay Away From

The strange hardware is most likely the cause of the system's software woes, as developers didn't want to code for such an awkward console. The games that were made looked 32-bit at the very best. Tempest 2000, the system's best game, is an intriguing space shooter with an amazing soundtrack. Even though it doesn't look particularly 64-bit, it doesn't try to. Its simplicity is actually what makes it so appealing.

The RCA Studio II is one of those consoles from the fledgling days of the gaming industry that was barely functional, and was simply an inferior version of existing consoles. The RCA's game library was nearly unplayable, as most games didn't display enough information for the gameplay to make any sense whatsoever.

The console took multiple wiring boxes to get started, and also had the controllers attached to the system itself, meaning you needed to keep the bulky thing on your lap while you played. Its least terrible game is Freeway, one of the games built into the console that had players slowly going down a road in a 1-bit racecar. The premier example on how not to make a game console, the RCA Studio II is arguably the worst gaming system of all time.

Next: 5 Features That Make Pokemon HeartGold And SoulSilver A Must-Play (& 5 That They Should Have Included)

About The AuthorSamuel Williams(34 Articles Published)

Sam Williams is a writer, editor, and general consumer of media based in VA. He's worked in customer service, the fast-food industry, and is currently writing for Valnet, and more specifically CBR. Sam has a bachelor's degree in English from James Madison university.

More From Samuel Williams
Tags： when was the atari game console released to the public
Latest： How to Uninstall a Game on Xbox One to Free Up Space
Next： Playing Violent Video Games Makes You a Better Person, Study Says
Popular Articles/span>