The Atari VCS retro console gets its long-awaited retail release

The Atari VCS — a part-desktop PC, part-retro console modeled after the Atari 2600 — is finally available to buy at retail. Atari is selling the console via its own site while Best Buy and Micro Center also have their listings. This isn’t the first time the console has been available to the public (VGC notes that Indiegogo backers recently received their consoles) but it’s the first time the machine has been available to buy at retail.

The VCS has been a long time coming. Originally teased in 2017 as the “Ataribox,” the project re-emerged the following year as the Atari VCS, with Atari running an Indiegogo campaign to fund its development in June 2018. Originally, the console had been due to ship in mid-2019 but reportedly ran into a series of development difficulties, culminating in the project’s lead architect quitting.

The device that’s been released technically does what Atari promised, but reviews have been pretty middling. VGC says the console’s built-in selection of 100 Atari games (18 from the arcade and 82 from the Atari 2600 console) might be emulated perfectly, but many are “so incredibly basic that they really don’t hold up to the mildest scrutiny in 2021.” There’s also an app store where you can buy modern games, but pickings are slim and lacking in exclusives. 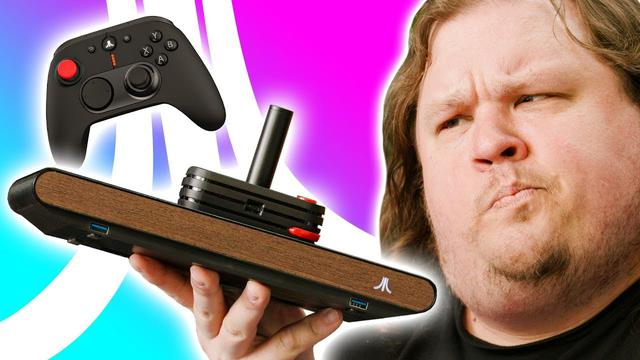 The console technically also works as a streaming box for services like Netflix and Disney Plus, but VGC notes these are just “glorified Chrome bookmarks” rather than native apps. At least the promised desktop mode actually works, allowing you to install Windows, Linux, or ChromeOS and use the machine like a modestly-specced but cool-looking desktop PC.

If you do decide to go down the desktop PC route, the Atari VCS is powered by an AMD Ryzen R1606G system-on-a-chip, paired with 8GB of RAM and 32GB of storage (both upgradeable). There are two USB 3.1 ports on the front and two on the rear along with Ethernet and HDMI 2.0 ports. In other words, don’t expect this machine to rival an Xbox Series S despite its similar $299.99 starting price.

Suffice it to say that you probably shouldn’t be rushing out to drop upwards of $299.99 on the Atari VCS (or $399.99 for the Walnut version, which comes with an included wireless joystick and controller, which retail separately for $59.99 each). But despite its flaws, it’s still an interesting mini PC that might be worth checking out as a curiosity when it inevitably drops in price.

Tags： when was the atari game console released to the public
Latest： How to use Discord on your Xbox One to show your friends what ...
Next： 'Paranoid' Chicago mom fatally shot son, 12, in the head in a rage over a missing memory card - The Washington Time
Popular Articles/span>