The 12 Most Expensive Limited Edition Game Consoles Ever Sold

With technology making such drastic leaps during the last decade or so, and gaming being the prime source of entertainment for millions around the world, it’s no wonder that gaming - as an industry - has garnered huge attention from collectors.

Just look at the exponential growth of eSports, and the costs of some of these games (Activision’s Destiny cost a reported $500 million to make, while Avatar, the highest-grossing movie of all time, cost $425 million to make), and it’s easy to see the huge financial empire that the gaming community is creating in the world.

Still, some of the retro consoles and limited edition collectibles are simply priceless - only one or two have been made, and they’re never going to be sold (Bill Gates famously gave a mother-of-pearls-embossed Xbox to the leader of South Korea as a gift). On the other hand, you have limited edition runs of gaming consoles that show up on the market every once in a while, and connoisseurs jump on them and spend huge amounts of money doing so. Here are 12 of the most expensive limited edition consoles that have ever sold.

The Sega Aiwa Mega Drive CD was an odd-looking CD player/Sega Mega console amalgamation. The console, which kind of looks like a space-aged boom box, was a two-unit piece, with a CD radio and Mega Drive dock.

The dual system was a variant of the Sega Mega Drive, and is one of the rarest retro consoles out there, with the system only having a limited release in Japan in 1994. Recently, a collector bought the console on eBay for around $1,800.

Hitachi released the HiSaturn Navi in late 1995, about a year after Sega released the Saturn. At the time, the console was probably the most versatile, extreme gaming system on the planet. It was compact, had an LCD screen (novel at the time), a car adaptor, a GPS system, a TV-tuner port, and even a karaoke machine built in.

As part of a co-brand with Sega (Hitachi provided the Saturn’s CPUs), the system had a standard Saturn port, as well as two microphone inputs for karaoke. The HiSaturn Navi went on to become one of the rarest consoles out there, with only about 2,000 units being produced in its month-long production. HiSaturn Navi’s in moderate condition have sold on eBay for about $2,000.

The RDI Halcyon, although not specifically a limited edition release, takes the cake as the most expensive video game console ever release, retailing in 1985 for $2,500, or $5,500 in today’s money. The system was a monstrous, boxy laserdisc gaming console, with only two games ever released during its short run.

Rick Dyer, the creator of the popular laserdisc games Dragon’s Lair and Space Ace, developed the Halcyon. The console had a few notable features, including a speech recognition processor, and a Voltrax speech synthesizer, which allowed the machine to talk to the player. Dyer compared the console to the HAL-9000 computer from 2001: A Space Odyssey, calling the machine a “living entity.” If the Halcyon was a living entity, well, it died young. 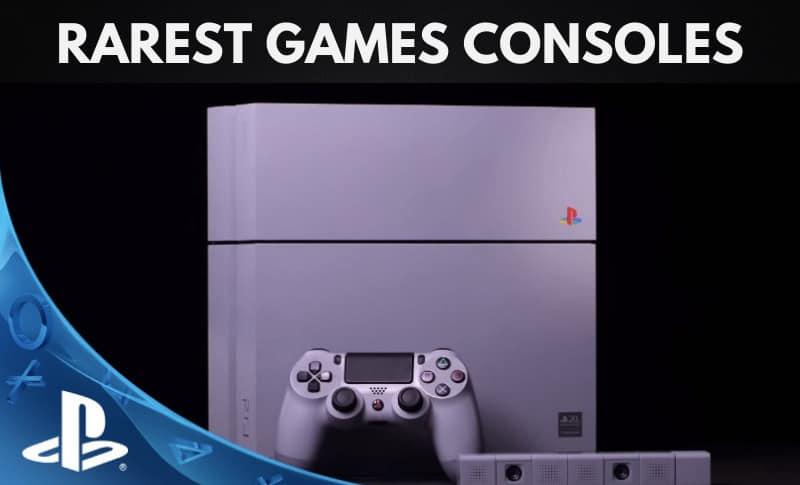 The Sega Dreamcast was the less-popular successor to the Sega Saturn, despite selling over 10 million copies during its lifespan. During its 1998 release, and beyond, Sega partnered with many other companies to created limited editions of the console, including with Maziora of Nippon Paint. The Maziora Dreamcast was painted in a pearlescent coating, which changed colors depending on the viewing angle.

There have been reports that 500 of the consoles were produced. There were one of two ways to get one: a) ordering online, and b) by winning it at a racing event, which produced 200 signed versions of the console. The Maziora Dreamcast has sold for $6,000 in a recent eBay auction, but prices fluctuate depending on console quality.

Another case in point about the various, pricey limited edition Dreamcasts comes in the form of this Gundam RX-78 CE. Gundam, the popular anime, has a thriving fanbase and many, many limited edition things associated with it, which makes this console all the harder to get for diehard fans: There were only 78 of them made.

The pretty console came colored in the same scheme as the Gundam RX-78 model, and has varied in price on auction sites across the world. The most recent one sold on eBay for $7,300.

This gem-studded Xbox 360 was a limited edition console that probably shouldn’t have ever been made. That being said, some diehard Lara Croft fan is willing to shell out months of rent or mortgage payment to buy this thing, because it features Croft’s face in stunning, gem-studded reality.

The console was decorated with the Lara Croft artwork, and then peppered with over 43,000 colored crystals, and it can all be yours for just $11,000.

The “world’s first gold gaming consoles” were released by UAE retailer Jumbo Electronics in 2014. The Xbox One and PS4 consoles are sleek and unique, but those qualities don’t necessarily warrant their $13,600 price tags.

The consoles were designed by renowned Italian jeweler Gatti Luxury, and were displayed at the GAMES14 convention in Dubai, Both machines are housed in special cases of rose gold, consisting of over 220 grams of 9-carat gold, though the PS4 apparently has six grams more than the Xbox.

The Atari was the first system to begin the home-gaming craze in the world, and, as such, many of their products are highly sought after and as equally pricey. One such example was the Atari Cosmos, a handheld system that was never actually released to the public. If it were, it would have been revolutionary, because the Cosmos featured a holography display (two holographic images that superimposed over the LED-based display).

Development for the system began in 1978, but only five of the units exist, as it was never finished for public release. Three of those units are empty shells, while two are fully functional. One is owned by Atari (good luck getting that one), while the other is owned by an Atari employee. In 2005, one of the incomplete shell units sold for $18,853.

In 2004, Nintendo created a promotion to go along with their release of Link’s Minish Cap, which has since gained notoriety in gaming lore. The gold-colored handhelds were advertised as Willy Wonka Chocolate Bars (to tie in with the 2005 release of Charlie and the Chocolate Factory).

Nintendo claimed that a few of the boxes contained a golden ticket, which could be exchanged for a solid 24-carat gold Game Boy Advance SP. However, there were never any confirmed winners of the contest, nor of the solid gold console’s existence. But scammers are everywhere, and a few years back an unopened “Special Edition 24-Carat Gold” SP sold for $20,000 to some poor individual, who either never opened the box, or if he did, he probably realized he’d been sold a much less-valuable gold-COLORED version, which many people won.

The Emperor 200 Workstation was described by creators MWE Lab as “a comfortable, immersive, and aesthetically unique environment for people that spend many hours in front of their computers,” though it looks more like a weighty, monstrous machine right out of the Matrix.

The ‘workstation’ comes with three LCD screens, an LCD touchscreen, a leather recliner, a lighting system, an integrated webcam, a Blu-ray player, a Playstation 3, and noise canceling headphones, all of which are designed to help you block out all of humanity or the real world. The system sold for $40,000, and, shocker, didn’t market very well to your everyday gamer.

When you look at this console and its price tag, one has to agree that it is about as necessary to humans as paying for cable television. But, the Playstation 3 Supreme wasn’t built out of necessity, but out of extravagance. And in this day-and-age of unabashed decadence, you know someone will buy it.

If Goldstriker’s Playstation 3 Supreme wasn’t your cup of gaming-tea, you can also buy the inferior, Nintendo Wii version of the same thing for £100,000 more (£299,995 original price tag, around half a million dollars at the time, or $433,000 now). Despite being the most expensive gaming console ever created, and costing more than many houses, it’s sad to think that the actual value of these machines is only a few hundred dollars.

The Wii Supreme comes with 2,500 grams of 22ct gold (900 more than its Playstation counterpart), and front buttons decorated with 19.5ct diamonds. Both of these systems were designed by Stuart Hughes of Goldstriker International.

Next12 Celebrities Who've Had Valuables Stolen

Cory is a freelance writer and web designer, and the lead guitarist and songwriter for heavy metal band Blood Dancer (based out of San Diego). He's also an aspiring novelist. Check out corybarclay.com for portfolio and more.

More From Cory Barclay
Tags： what is the rarest game console
Latest： FAQ: How To Play Xbox Games On Xbox 360? - How to play
Next： 15 Free NFL Live Streaming Sites in 2021 (Updated) - SharpHunt
Popular Articles/span>