Soulja Boy Is Taking Over The Gaming Industry -- One Console ...

Soulja Boy‘s voice is breaking up. He apologizes, the culprit is his house — it’s in the hills and possesses less than optimal reception — rapper problems. He’s already let his 5 million-plus followers on Twitter know that we’re going to talk: “Whoa I got rolling stone and Forbes requesting a interview oh shit.” A couple of hours later he’ll let the same followers know he finished said interview with Rolling Stone; he didn’t tweet about his Forbes interview, so I don’t think I’ll get scooped on this story. It’s the kind of hyper-documentation DeAndre Cortez Way has been practicing for over a decade, in part because he pioneered it.

Soulja wants more. His latest plan to get more is called SouljaGames, and it’s arrived in time for the holidays. On his website, the 28-year-old entrepreneur is selling a plethora of electronics including the SouljaWatch, SouljaPods, SouljaPhone and SouljaHeadphones. None of that is too out of the ordinary; off-brand electronics are available across the country, though throwing your name on it is a simple, if ambitious, twist. However, it’s the introduction of the SouljaGame console and handheld device that launched writers and critics into a suspicious and condescending frenzy. Various headlines call Soulja’s hardware “sketchy” and “overpriced” and “questionable.” Which is to be expected: the SouljaGames consoles created by Anbernic are emulators, which means they exist only to host a variety of games made by other companies. According to the SouljaWatch website, the SouljaGame console can play “SOULJAGAME/PS/NEOGEO/PC/SEGA/GBA/NES,” while the handheld version plays Nintendo Switch and 3DS, among others. Soulja Boy made a console to play other people’s games.

He’s aware of the criticism. How could he not be? Despite his long-simmering tenure in the spotlight, Soulja Boy is still the whipsmart internet fiend who roasted Ice T into oblivion on YouTube before rappers becoming talking heads for multi-million dollar media companies became a viable career option.

“I know it’s new to the industry. I know they’re scratching their heads and there’s going to be a lot of talk, but hey man, I’m just a person with a dream,” Soulja says. “I know that I’ve been introduced to the world as a rapper, dancer, producer, but don’t just limit me to that and think outside the box and really give me a shot with this.”

Soulja Boy’s career is a pendulum swinging with the rise and fall of the public’s skepticism. “Crank That (Soulja Boy)” launched him into the popular consciousness through a simple dance, but it’s the marketing savvy of DeAndre that’s kept the rapper on the fringes of the popular consciousness since. Soulja was an internet savant at the outset of viral rap. His rapping and barebones production style partially influenced an entire generation, if in its DIY ethos more than its sound. Now, for better or for worse, he’s set his eyes are set on the tech industry. Rolling Stone caught up to him to talk about his plans.

When did you have the idea to sell your own gaming consoles?This idea came to me a while back. I had this idea like years ago. I’ve always been interested in gaming growing up as a kid. I played games all my life. So once I got into the music industry and I was successful with my music I always wanted to get into the gaming world. So first I did a video game. I started off with a video game and I did two actual games. They were on iPhone, iPad and Android devices. The first game was called Beef With Soulja and the second game was called Fighting Soulja – Draco Edition. It was like two mobile games I released. They did pretty well and after I made those two games I was like “Man, I want to make another game, but I want to make this game for PlayStation and Xbox and PC.” I was like “You know what? Forget making the video game for Xbox, PlayStation and PC. How about I make my own console?” 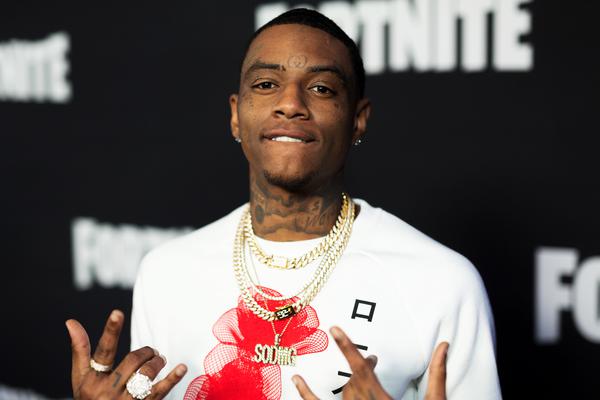 I’m looking at the Xbox for Microsoft and looking at the PlayStation for Sony and I’m looking at the Wii for Nintendo. I’m just studying like there’s always been three pretty dominant consoles when it comes to the market so I’m like, “How hard or how challenging would it be to introduce another console?” I knew it was going to take a lot of money and take a team, just a lot to come with it so I played with the idea for a while and I finally decided to pursue it. I talked to a lot of developers, talked to a lot of companies, went to a lot of dinners and just being around the industry a lot, I’m like “You know what? I’m older now. I want to tackle this. I want to pursue it.” So I did.

What was the process of buying this product? Was it something that you had to go overseas and buy wholesale?It’s me basically touring, man. You find out a lot, from me going to Dubai and me going to Paris and China and Tokyo, Osaka, Okinawa, all these different places overseas. I been literally everywhere from Greece to Italy to Barcelona and Spain. I been so many places overseas. From the first time that I went over to China, I think I was around the age of 17, 18 and just going there and seeing that their technology being years ahead of ours in America. It sparked something with me back then. That was my first time going over there.

What happened with Shopify? You were telling your followers on Twitter that they were racist. Can you explain what happened?Basically, when you’re dealing with different companies in the business world you’re going to run into problems. That was just me giving Shopify a little smoke. Giving them a little smoke and let them know who they’re dealing with, but everything’s been resolved. I spoke with them. They’ve fixed everything. Everything is fine. Much love to Shopify. I just have to give them a little smoke. [Laughs]

Some tech outlets have been critical. They’ve shared that the SouljaGame consoles are emulators that you can buy cheaper on AliExpress. How do you deal with that criticism? Do you have anything to say to them?Honestly, I just think that when you’re coming out with a new product you’re gonna be criticized. You have to deal with criticism, but I think that once people actually get this product in their hands and get to review it themselves, personally, I think it’ll be a different outcome.

Do you feel like you get enough credit for predicting where the internet is headed at any given time?I feel like I’ve been credited, but me personally I have no issues or no problems with the credits and stuff like that. I have paid attention to the comments and I see the fans feel that way. Every time I’m on the internet it’s like, “Yo, He doesn’t get the credit he deserves. He started this. He did this with the internet. He put these artists on. He opened this door.” I’m like, “Yeah. they’re right,” but I don’t feel that way. I feel like me being here as an artist, being here in the industry is enough credit.

Are you afraid of their being any potential legal ramifications if gaming companies come for you?Honestly, I feel that everything is 100% legit and there will be no reason for any legal ramifications or anything like that. Honestly, I don’t have any worries at all, any concerns, because everything we’re doing is legit. It’s been researched. Everything has been basically confirmed that it’s a green light and we’re good. It’s partly the people from the outside looking in, that aren’t understanding the type of deals that were made behind the scenes that are worried.