Video games have been around for decades. From arcade systems, to home consoles, to handheld and mobile devices, they’re often at the forefront of computer technology. Nearly two thirds of all Americans have household members who game regularly, making video game console history relevant weeknight trivia.

Though the first of their kind was introduced in the 1950’s, video games had not made a mainstream splash until the late 70’s/early 80’s. Today, we’re going through the most notable trends in the history of video games from the 1980’s to today.

For the most part, 1980s games were simple clones of existing arcade titles. The history of video games changed with the introduction of third party publishers. The relatively low publishing costs for personal computer games allowed for bold, unique games. In 1983, the video game industry experienced a market crash like no other. The transition of arcade gaming to consoles that were home-friendly was in full effect: marking the beginning of video game console history.“Activision’s success as a third-party developer for the Atari VCS and other home consoles inspired other third-party development firms to emerge in the early 1980s; by 1983, at least 100 different companies claimed to be developing software for the Atari VCS.” – David Crane Interview 2016 / Video Game Crash of 1983.

The Odyssey was manufactured by Magnavox and released in North America in September of 1972. It’s considered the very first home video game console. Ralph Baer, a German-American engineer, created a ping-pong style game. Baer’s creation inspired gaming pioneer Nolan Bushnell of Atari to create his own version: the much more popular and world-renowned Pong, programmed by Al Alcorn.

Sega SG-1000 (~2 million sold) | (1983)At the time, Sega was a subsidiary of Gulf & Western – one of the top five arcade manufacturers. The Sega SG-1000 was the first of its kind to be made specifically for households.

NES Family Computer (~62 million sold) | (1983)“The NES featured a number of groundbreaking games, such as the platform game Super Mario Bros. and the action-adventure games The Legend of Zelda and Metroid. As one of the bestselling consoles of its time, the NES helped revitalize the US video game industry following the video game crash of 1983.”A huge part of the NES’s success was its innovative business model. NES licensed third party publishers to create & distribute the NES’s games.

Nintendo Family Computer Disc System (~4 million sold) | (1985)Player One’s controller can pause the game, and Player Two’s controller has audio controls. The cartridges were half the size of the NES’s, and were inserted in the top instead of through a door in the front (like on the NES). Instead of looking like a vertical cartridge, like the NES, it more closely resembles a SNES cartridge.

PC Engine TurboGrafx (~10 million sold) | (1987)One of the most “hybrid” consoles of all times. Created by Hudson and NEC to be the versatility of a PC with a sole operation of gaming like a console. The PC engine utilized an 8-bit processor with 16-bit graphics, merging much of the stronger tech from the time without reinventing the wheel for its developers.

Sega Genesis (~35 million sold) | (1987)30.75 million first-party Genesis units were sold worldwide. Many games have been re-released in compilations or on online services such as the Nintendo Virtual Console, Xbox Live Arcade, PlayStation Network, and Steam

Three decades in as an industry, the 1990’s was a decade of innovation for video game console history. Not only were the 90’s the highest grossing period for the history of video games timeline so far – but a rise in technology made the potential vision for video games more clear. 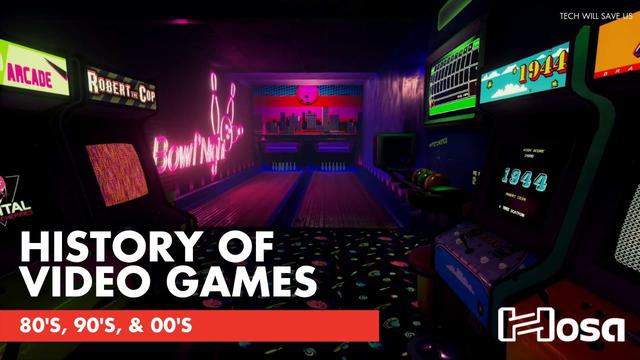 It was a decade of transition from sprite-based graphics to full-fledged 3D graphics. The 90’s gave rise to several genres of video games including the first person shooter, real-time strategy, survival horror, and MMO. And though arcades had still been popular during the 90’s, they would be soon on the decline with the popularity of household consoles.

Super NES (~49 million sold) | (1990)The SNES received largely positive reviews and was a global success, becoming the best-selling console of the 16-bit era after launching relatively late and facing intense competition from Sega’s Genesis console in North America and Europe. It continues to be popular among collectors and retro gamers, with new homebrew games and Nintendo’s emulated rereleases, such as on the Virtual Console, the Super NES Classic Edition, and Nintendo Switch Online.

Philips CD-i (~1 million sold) | (1991)The attempts to develop a foothold in the games market were unsuccessful, as the system was designed strictly as a multimedia player and thus was under-powered compared to other gaming platforms on the market in most respects. Earlier CD-i games included entries in popular Nintendo franchises, although those games were not developed by Nintendo and Philips had established an agreement to co-develop a CD-ROM enhancement for the Super Nintendo Entertainment System due to licensing disagreements with Nintendo’s previous partner Sony (an agreement that produced a prototype console called the SNES-CD).While Philips and Nintendo never released such a CD-ROM add-on, Philips was still contractually allowed to continue using Nintendo characters.

3DO Interactive Multiplayer (~2 million sold) | (1993)Despite having a highly promoted launch (including being named Time magazine’s “1993 Product of the Year”) and being a host of cutting-edge technologies, the 3DO’s high price and an oversaturated console market prevented the system from achieving success comparable to competing consoles from Sega and Nintendo. As a result, it was discontinued in late 1996.

Sega Saturn (~9 million sold) | (1994)The Saturn was initially successful in Japan but failed to sell in large numbers in the United States after its surprise May 1995 launch, four months before its scheduled release date. After the debut of the Nintendo 64 in late 1996, the Saturn rapidly lost market share in the U.S., where it was discontinued in 1998. Having sold 9.26 million units worldwide, the Saturn is considered a commercial failure; the failure to release a game in the Sonic the Hedgehog series, known in development as Sonic X-treme, is considered a factor in its poor performance. The Saturn was succeeded in 1998 by the Dreamcast.

Sony Playstation (~102 million sold) | (1994)The PlayStation signalled Sony’s rise to power in the video game industry. Its release elicited critical acclaim and strong sales; in less than a decade, it became the first computer entertainment platform to ship over 100 million units. Its use of compact discs heralded the game industry’s transition from cartridges.

Nintendo 64 (~34 million sold) | (1996)Development of the console began in 1993 under the codename “Project Reality”. Although the design was mostly complete by mid-1995, its launch was delayed until 1996. The console takes its name from the 64-bit processing unit. It was launched with three games: Super Mario 64, Pilotwings 64 and Saikyō Habu Shōgi (exclusive to Japan). Time named it Machine of the Year in 1996, and in 2015, IGN named it the ninth-greatest video game console of all time. The Nintendo 64 was discontinued in 2002 following the launch of its successor, the GameCube. The Nintendo 64 was critically acclaimed upon release and remains one of the most recognized video game consoles.

Dreamcast (~9 million sold) | (1998)Although the Dreamcast had a short lifespan and limited third-party support, reviewers have considered the console ahead of its time. Its library contains many games considered innovative, including Crazy Taxi, Jet Set Radio, Phantasy Star Online, and Shenmue, as well as high-quality ports from Sega’s NAOMI arcade system board. The Dreamcast was also the first console to include a built-in modular modem for internet support and online play.

An era of rapid technological development, the 2000s delivered a wide array of changes in animation, gaming, and website design. After all, this was the start of the Internet Age – paramount in the evolution of smartphones, computers, and social media.

Playstation 2 (~155 million sold) | (2000)The PS2 is the best-selling video game console of all time, having sold over 155 million units worldwide. Over 3,800 game titles have been released for the PS2, with over 1.5 billion copies sold.

Nintendo Gamecube (~22 million sold) | (2001)Reception of the GameCube was generally positive. The console was praised for its controller, extensive software library and high-quality games, but was criticized for its exterior design and lack of features. Nintendo sold 21.74 million GameCube units worldwide before the console was discontinued in 2007. Its successor, the Wii, was released in November 2006.

Xbox (~25 million sold) | (2001)The original Xbox was released on November 15, 2001 in North America, February 22, 2002 in Japan, and March 14, 2002 in Australia and Europe. It was Microsoft’s first foray into the gaming console market. The integrated Xbox Live service launched in November 2002 allowed players to play games online with or without a broadband connection. Xbox Live was a success due to better servers than its competitors and its features such as a buddy list, and milestone titles like Halo 2 released in November 2004, which is the best-selling Xbox video game and was by far the most popular online game for the system.

Xbox 360 (~86 million sold) | (2005)Xbox 360 is the sixth-highest-selling home video game console in history, and the highest-selling console made by an American company. Although not the best-selling console of its generation, the Xbox 360 was deemed by TechRadar to be the most influential through its emphasis on digital media distribution and multiplayer gaming on Xbox Live.

Playstation 3 (~87 million sold) | (2006)During its early years, the system was negatively received, due to its high price ($599 for a 60-gigabyte model, $499 for a 20 GB model), a complex processor architecture, and lack of quality games but was praised for its Blu-ray capabilities and “untapped potential”. The reception would get more positive over time. The system had a slow start in the market but managed to recover, particularly after the introduction of the Slim model.

Nintendo Wii (~102 million sold) | (2006)The Wii repositioned Nintendo as a key player in the video game hardware marketplace. The introduction of motion-controlled games via the Wii Remote led both Microsoft and Sony to develop their own competing products—the Kinect and PlayStation Move, respectively. Nintendo found that, while the Wii had broadened the demographics that they wanted, the core gamer audience had shunned the Wii.

Wii U (~14 million sold) | (2012)Response to the Wii U was mixed. It was praised for its innovative GamePad controller, improvements to online functionality over the Wii, backwards compatibility with Wii software and peripherals, and price; however, it was criticized for its user interface and functionality, and the GamePad’s short battery life.

Playstation 4 (~106 million sold) | (2013)The PlayStation 4 was released to critical acclaim, with critics praising Sony for acknowledging its consumers’ needs, embracing independent game development, and for not imposing the restrictive digital rights management schemes like those originally announced by Microsoft for the Xbox One.

Xbox One (~41 million sold) | (2013)The Xbox One received positive reviews for its refined controller design, multimedia features, and voice navigation. Its quieter and cooler design was praised for making the console more reliable than its predecessor on-launch, but the console was generally criticized for running games at a technically lower graphical level than the PlayStation 4.

Nintendo Switch (~68 million sold) | (2017)By the start of 2018, the Switch became the fastest-selling home or hybrid console in both Japan and the United States. As of December 2020, the Nintendo Switch and Nintendo Switch Lite have sold more than 79 million units worldwide. Switch sales have been strongly tied to sales of Nintendo’s first-party titles, with six games; The Legend of Zelda: Breath of the Wild, Mario Kart 8 Deluxe, Super Mario Odyssey, Super Smash Bros. Ultimate, Pokémon Sword and Shield, and Animal Crossing: New Horizons having sold over twenty million units each.

As video game consoles are constantly evolving, so do the accessories that help ensure its reliability. At Hosa, we carry the most efficient USB Cables & Adapters in the market.

Hosa
Tags： a home video game console that was released by sega
Latest： Best Xbox One accessories: all the extras you need to own for ...
Next： Samantha Nerove: Why so many mass murders? Study ... - Fox News
Popular Articles/span>