Zverev’s Swings Merited More Than a Slap on the Wrist

SAN DIEGO — Somehow, the men’s tennis tour is allowing the German star Alexander Zverev to play on. He will be in the field for the BNP Paribas Open, which begins this week in Indian Wells, Calif., despite his frightening, unacceptable abuse of an official just two weeks ago after a defeat in doubles in Acapulco, Mexico. 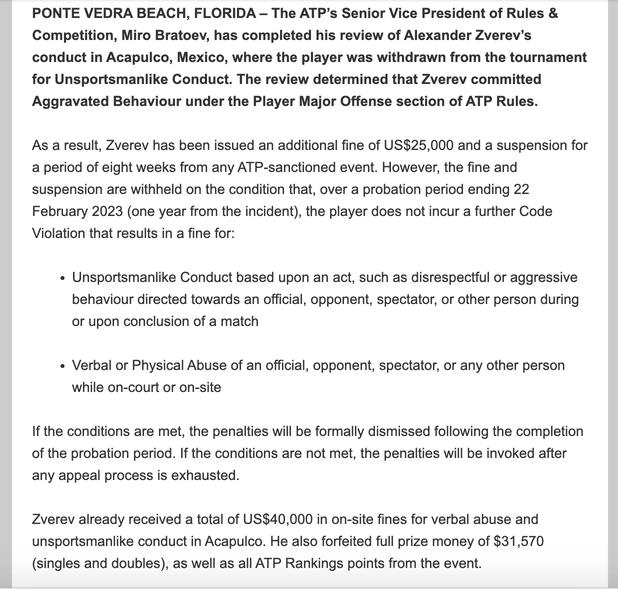 “The conduct of Zverev was the most egregious example of physical abuse of an official that I have seen in my decades working in and observing men’s professional tennis,” said Richard Ings, a former executive vice president for rules and competition at the ATP Tour.

After cursing at the chair umpire Alessandro Germani following a questionable line call, Zverev took four big swings at the umpire’s chair with his racket after the match. The first three blows landed close to Germani, causing him to flinch and shift his feet at one point to avoid being struck. After Zverev took a short break to curse at Germani some more, he returned for one more swing at the chair.

He was appropriately defaulted from the tournament after winning his subsequent singles match, fined $40,000 and docked the prize money he would have earned from the event. But though the follow-up investigation by the ATP rightly determined that Zverev, 24, had committed a “major offense,” he received the equivalent of a suspended sentence on Monday.