www.thegamer.com Xplored On AR Board Game Platform Teburu, World Of Darkness, And The Rise Of 'Phygital' Gaming

It felt like the early-to-mid 2010s were the height of ‘phygital’ gaming. Skylanders and Disney Infinity led the way with the entire toys-to-life genre, but we also had the likes of Rock Band, the Wii U, and even less popular attempts like the Wonderbook. With the collapse of Disney Infinity in 2015, it felt like augmented reality was over for video games, but the spirit of the days had quietly continued in the board gaming space. Whether it's simple free services like Magic: The Gathering's Spelltable, or grander projects like the AR-glasses-powered Tilt Five, tabletop has been picking up where video games left off.

THEGAMER VIDEO OF THE DAY

One particularly exciting project is Xplored's Teburu. Being marketed as something of a 'console for board games', it's been a popular fixture at gaming events ever since its reveal in 2019. Combining digital services with physical game pieces, Teburu got a big boost recently with a newly-announced partnership with Paradox Interactive to bring the classic tabletop franchise World of Darkness to the platform.

It's easy to look at Teburu and not be entirely sure what you're looking at. Is it an AR thing? Is it toys to life? Is it one of those metaverse things the New York Times keeps banging on about? According to Garofalo, not precisely. At its core level, Davide Garofalo, Xplored's CEO, describes it as "a smart board, smart minis, wireless dice, LED ring, and an interconnected game app". The board has sensors to detect the RFID chips inside of each miniature, which can track their location and even the game piece's status – keeping a tally of their stats, equipment, and status, for example. The figures can also be upgraded with the LED ring to show, for example, where an enemy is vulnerable. However, that isn't planned for use with Xplored’s collaboration with Paradox on the first of its World of Darkness games, Vampire: the Masquerade – Milan Uprising, and is so for only being used with Teburu's other announced game, The Bad Karmas and the Curse of the Zodiacs.

Meanwhile, the dice can instantly transmit the results of its rolls to the app, which then sorts out all the rules calculations and processing. Throwing a load of electronic components in a dice sounds like a great way to throw it off that all-important balance, but Garofalo reassured me that, although the versions seen so far at events have only been "roughly balanced", the final thing is being designed to ensure it is perfectly balanced both when still and during a roll. 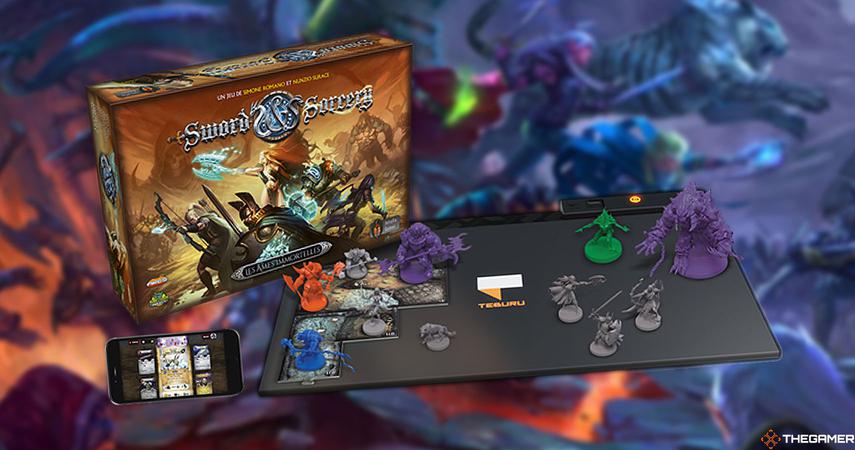 One of the big advantages of having an app track your rules and stats is that it easily allows for remote play, where players can play together on two completely different Teburu systems. While you could argue that this is something almost any tabletop game can do with a webcam, like what Magic The Gathering does with Spelltable, Garofalo was keen to point out that "nothing exists through webcams and smartphones to offer what Teburu does". 'What Teburu does', specifically, being smart games "without AR glasses, magic wands, or big and expensive tables".

Teburu might seem like an ambitious project, but Xplored has experience with producing this kind of ‘phygital’ hardware. It previously worked with Bandai Namco to make Tori, a platform that uses a similar smart board and "educational devices" to play several educational games. It also worked with 505 Games on the more traditionally toys-to-life racing game Runimalz.

So how does a company go from making toys-to-life games years after the trend collapsed to producing tabletop games for one of the most well-known brands in the space? According to Garofalo, it was a weird bit of luck: "Paradox was the first partner I instinctively tried to contact [when starting work on Teburu]. When I wrote to their management to explore their interest in Teburu, I promptly received a reply that Paradox was already looking for a direct contact with us".

The first game in this partnership is Vampire: the Masquerade – Milan Uprising. Set in Paradox's huge World of Darkness universe, the announcement described the game as featuring "hidden actions, interactive storytelling, and secret goals inspired by Vampire's stories of personal and political horror." That's vague as anything, though, so I asked Garofalo about what exactly Milan Uprising is.

According to him, it’s a "cooperative miniature game with a strong narrative and RPG elements. But there are, of course, personal goals and hidden information. You're a vampire after all". So this isn't a straight adaptation of the Vampire: the Masquerade RPG, which, sadly, Garofali says there are "no plans" to bring to Teburu. Instead, it sounds more like an antagonistic co-op game along the lines of Paranoia's focus on working together with untrustworthy teammates before an inevitable betrayal.

It hasn't been entirely plain sailing for Xplored and its previous partners. In the early days of Teburu, one of the first games announced for it was an adaptation of the zombie survival game Zombicide. It was a collaboration with the board game publisher CMON, but was soon scrapped due to, as Garofalo puts it, "changing business priorities" caused by the pandemic. Though CMON was a big part of the initial branding for Teburu, Garofalo was very clear to me that the "Teburu technology, system, and trademark has always been, and is, sole property of Xplored".

Work with Paradox has apparently been going a lot smoother. Paradox seemed to understand Teburu's goal of making digitally-supported tabletop games that "respect the way people play tabletop games". Milan Uprising is part of a multi-year deal with Paradox to bring numerous World of Darkness games to Teburu. Garofalo confirmed that one of the titles also in development is based on the franchise's second-biggest title, Werewolf: The Apocalypse. While Milan Uprising is based more on intrigue and subterfuge, Werewolf will take a more action-based, combat-focused approach. There is also an unannounced third game in the works, which aims to balance the two takes on the World of Darkness, though Garofalo didn't say which title it would be based on. My hope is for one of the lesser-known parts of the World of Darkness, like Changeling: The Dreaming.

It's reasonable, at first glance, to feel a little sceptical of Teburu. The technology is impressive, but after seemingly every other AR project collapsed over seven years ago, some may be cautious of its promises. Regardless, Xplored is getting ready to put Teburu into players' hands, with a Kickstarter campaign on March 15 for its first game, The Bad Karmas and the Curse of the Zodiacs. Backers will be able to secure the game and a Teburu for themselves at the $200 reward tier. With a reasonable price point, years of showcasing at in-person events to back up its claims, and support from massive tabletop names like Paradox and Sword & Sorcery publisher Ares Games, Teburu might really be the innovation board gaming has been looking for.

NEXT: How To Use Spelltable To Play Magic The Gathering Over Webcam

TheGamer's TCG Specialist and Verified Card Boy, covering all things Magic: the Gathering, Pokemon, Yu-Gi-Oh!, Flesh and Blood and more. His favourite Pokemon is Porygon, and his favourite Commander is Kwain, Itinerant Meddler!