BOISE, Idaho — New research shows that fewer wild steelhead are being caught by anglers and survive at higher rates once released, compared to hatchery fish.

This is good news since steelhead survival is crucial for continued fishing seasons while ensuring their protection when anglers target hatchery fish.

The study was conducted by Will Lubenau, a graduate student at the University of Idaho, under guidance of UI professor Michael Quist and in cooperation with Idaho Fish and Game, the U.S. Geological Survey, along with anglers and outfitters, who were critical to the success of the study.

Researchers tagged steelhead with visible orange tags during the study and also inserted small electronic transponders into the fish when they traveled downstream from the Lower Granite Dam to the Snake River near Lewiston.

When the fish continued upstream, many were caught by anglers who then reported the tags back to researchers. The fish then moved into the spawning areas, where biologist were able to detect them from the embedded electronic transponders.

The data revealed how many fish had survived the journey and whether they had been caught by anglers along the way.

Previously, Fish and Game managers had estimated that wild fish were caught as often as hatchery fish on average, and from those about 5 percent that were caught and released by anglers were likely to die.

Lubenau's research showed that the estimates were higher in both cases. Wild fish were caught about 22 percent less often than hatchery fish. Over the length of the study, about 33 percent of tagged wild steelhead were caught by anglers compared to 55 percent of hatchery fish. The percent of wild fish that survived catch-and-release fishing was closer to 96 percent, even when caught twice. 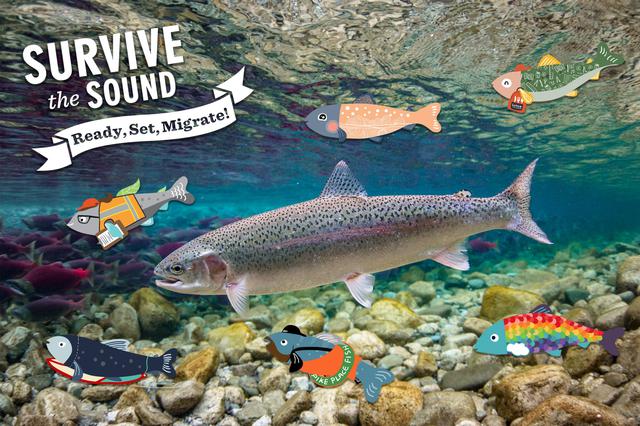 "This shows the impact on wild fish is less than what we estimated," Lubenau said. "And it was a consistent pattern across the whole fishery."

During one of the years of the study, and unusually small amount of steelhead returned, causing the Fish and Game Commission to temporarily suspend fall fishing. The following year, the season ran continuously, yet the results were nearly the same between the two years.

"I was surprised everything stayed so consistent," Quist said. "Everything was right on the money."

Quist and Lubenau highlighted that the study was not only important in understanding steelhead, it was key in informing fishery managers. The data affects future fishing seasons, which in turn affects the livelihoods of outfitters and guides that rely on steady steelhead fishing.

Despite the risk, the angling community was completely cooperative in helping researchers conduct the study which wouldn't have been possible without the anglers' assistance.

"They were great to work with," Lubenau said. "We now have better information than we had two years ago, and I think everyone is happy with how things turned out. It's good news for anglers, and it's good news for wild steelhead."

By providing fishery managers with a clearer understanding of wild steelhead, Lubenau's research will benefit Idaho anglers. This is just one example of how graduate students are handling real-world problems through research to help Fish and Game's fish management.

Similar research projects are scheduled to take place through the Idaho Cooperative Fish and Wildlife Research unit, which is comprised of Fish and Game, UI and USGS. The next projects will include bull trout in the North Idaho's St. Joe River, strugeon in the Upper Snake River, and perch and pikeminnow in Lake Cascade.

See the latest news from around the Treasure Valley and the Gem State in our YouTube playlist: