Western Michigan vs. Illinois State: A Bronco fan’s guide to ...

KALAMAZOO, MI — Football is back in Kalamazoo.

The Western Michigan University Broncos kicked off the season on the road against the Wolverines in Ann Arbor Saturday. Now. the Broncos return to Kalamazoo’s Waldo Stadium for the team’s first home game of the season, facing off with the Illinois State Redbirds, on Saturday, Sept. 11.

Related: WMU’s Bronco Marching Band gears up to perform at ‘The Big House’ in Ann Arbor

In anticipation of the 2021 football season, fans and Kalamazoo locals alike are gearing up for Western’s first home game.

Here’s what any self-respecting Bronco fan needs to know before heading to the stadium.

Tickets for individual games, a three-game package and season ticket packages are all available for purchase online through WMU Athletics. The Bronco Ticket Office can be reached via email at broncotickets@wmich.edu or by phone at 1-888-496-8849.

Public parking for those attending WMU football games can be found off Oakland Drive, Stadium Drive and West Michigan Avenue. The cost for parking is $10 per vehicle, and is paid before entering a lot.

Lot 105 is designated for WMU students. A free shuttle service is accessible three hours before kickoff and will continue to service tailgating lots.

The drop-off location for the stadium is at the corner of Stadium Drive and West Michigan Avenue, across from Gate 1.

Handicap-accessible parking is also available in Lot 4, located off of Oakland Drive, and Lot 6; east of the Seelye Centre off of Stadium Drive.

Visit the WMU Athletics homepage to get directions to Waldo Stadium and learn more about parking for the big game.

Tailgating is permitted from four hours before kickoff until the start of the game, and also for one hour after the game.

Glass containers are not allowed. Neither are kegs, half barrels or other common alcohol containers. Drinking games and use of devices to accelerate alcohol consumption are also prohibited.

Service animals are the only animals permitted in tailgating areas.

Authorities will be on campus and reserve the right to inspect any item, activity or vehicle. An entire list of tailgate lots and rules can be found on WMU’s website. 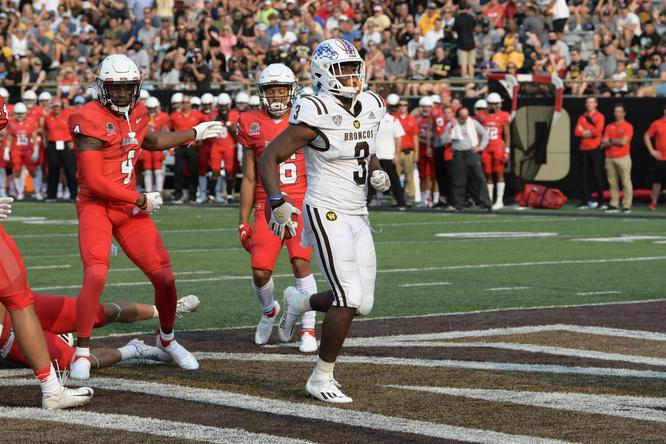 The stadium’s gates open 1 1/2 hours before the scheduled game time.

All Western guests and employees, as of Aug. 25, are required to follow current COVID-19 protocols as directed by the university, county and state. The stadium staff is required wear a face mask at all times when indoors.

When outdoors, within the seating areas, masks are strongly encouraged for all spectators. Regardless of vaccination status, all attendees are required to wear a mask when indoors, except when actively eating or drinking.

Indoor spaces include, but are not limited to, restrooms, elevators, indoor clubs and suites and the press box.

Prohibited items like bags that do not meet WMU’s Clear Bag Policy, must be returned to cars or disposed of before entering the stadium. To see the full list of prohibited items, head to the website for more.

Bronco fans know about the WMU Fight Song. If you don’t, there is still plenty of time to learn it before the game Saturday.

Pretend the enormous Bronco Marching Band is belting out the music in the background, which they certainly will at Waldo Stadium on Saturday, and practice singing along:

Fight on fight on for Western; take the ball, make a score, win the game.

Onward for the Brown and Gold; Push ‘em back, push ‘em back bring us fame.

Fight on fight on for Western; over one, over all we will reign.

Fight, Broncos fight, fight with all your might.Western win this game!

There are plenty of choices for a quick bite to eat, or something to drink, before or after the big game. Here are some popular places within striking distance of Waldo Stadium that have long been game-day favorites in Kalamazoo:

After Saturday’s matchup with the Redbirds, the remaining home football games on Western’s schedule for 2021 are:

Are Mconald’s McFlurry, ice cream machines always broken? The feds are looking into it