An analysis of brain activity demonstrates they become more emotionally charged after using the graphic technology.

At the same time there is a marked decrease in activity in parts of the brain which are linked to self-control, focus and concentration.

The findings will refuel concern about the effects of violent video and computer games on children.

Previous studies have shown that such games can 'desensitise' players to real-life brutality after just 20 minutes of playing.

The latest research from Indiana University School of Medicine, United States, shows that violent video games stimulate activity in the region of the brain governing emotional arousal in teenagers.

Researchers randomly assigned 44 adolescents to play either a violent or non-violent video game for 30 minutes.

A scanning technique was then used to study the volunteers' brain functions during a series of tasks measuring inhibition and concentration.

The two groups did not differ in accuracy or reaction times for the tasks.

But the group that had played the violent game showed less activity in the prefrontal parts of their brains involved in inhibition, concentration and self-control.

There was more activity in the amygdala region, which helps govern emotional arousal.

Dr Vincent Mathews, professor of radiology, who led the research, said: 'These findings raise concern that these types of video games are having some sort of effect on the brain and likely an effect on behaviour as well.'

He added: 'This is the first time that it has been demonstrated that violent video games can affect brain physiology and the way the brain functions.

'Our study suggests that playing a certain type of violent video game may have different short-term effects on brain function than playing a non-violent - but exciting - game. 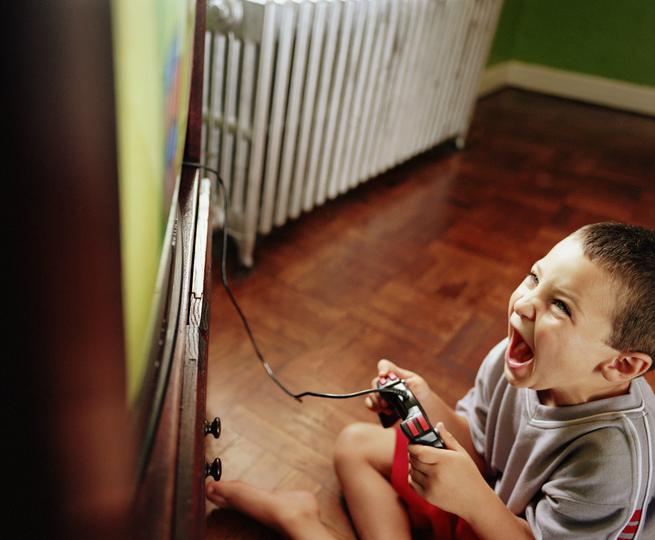 'Additional investigation of the reasons for and effects of this difference in brain functioning will be important targets for future study, but the current study showed that a difference between the groups does exist.'

The findings were presented to the annual meeting of the Radiological Society of North America (RSNA) in Chicago last week.

They come after a study from Iowa University, United States, revealed earlier this year that students who played graphic games for just minutes were less emotional when later confronted with scenes of real violence.

They had lower heart rates and perspiration when they viewed footage of shootings, stabbings, prison fights, courtroom outbursts and confrontations with police.

This showed they had become desensitised to real-life brutality, according to researchers.

This is because players treat the situation as if it is real and react violently and unemotionally to threats.

U.S. soldiers are encouraged to play such games to make them more accustomed to killing in combat.

Professor Mark Griffiths, head of psychology at Nottingham Trent University, has previously warned that children are more at risk of being affected by violent video games than adults as their brains are not yet fully formed.

In September 2004, Warren Leblanc, 17, was sentenced to life imprisonment at Leicester Crown Court after murdering his friend in an apparent imitation of the violent computer game, Manhunt.

He lured 14-year-old Stefan Pakeerah to a park before beating and stabbing him to death with a claw hammer and knife, weapons used in the 18-rated game.

Stefan's parents claimed Leblanc was obsessed with the PlayStation 2 game and used it like an 'instruction manual' to inflict more than 50 injuries on their son in the attack.

They called for the game, described as the 'most violent and amoral' ever made, to be banned. Tony Blair joined the condemnation of the game, claiming it was 'in no way suitable for children'.

Most recent controversy has surrounded a new Sony PlayStation game, Rule of Rose, which was released in Britain on November 24 and shows a young girl being kidnapped and tortured.

The game has so shocked Franco Frattini, the European Justice Commissioner, that he has written to every EU government calling for tighter controls on games that show and glorify violence.