Video games can improve your health. You just need to ... - News

Video games often get a bad rap. They can conjure images of a kid sitting on the couch for hours, forgoing fresh air and exercise.

But some games are made to get people moving. This genre, called active (as opposed to sedentary) video games, can actually benefit a player’s physical and mental health.

Northeastern professor Amy Lu is interested in harnessing the power of video games, combined with narrative storytelling, to improve health. She recently collaborated with postdoctoral researcher Jungyun ‘JY’ Hwang to study this topic and published the findings in the journal Scientific Reports earlier this month.

The researchers recruited 110 Northeastern students for the first-ever study of how active video games affect the health of young adults. Lu and Hwang wanted to find out whether adding a narrative element to an active video game would lead to increased physical activity and improved cognitive function in the players.

To test this, they divided study participants into two groups. Both groups played a game called Kung-Fu for Kinect on the gaming console Xbox One. 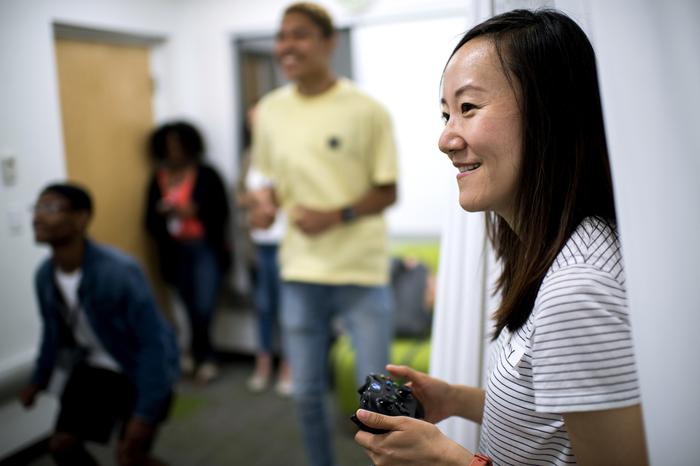 The game has an option that allows players to listen to a narrative prior to playing. The story sets the stage for players to adopt a protagonist persona in the game’s storyline.

One group of students in the study played Kung-Fu after listening to the narrative at each stage of the game, while the other group skipped over the narrative and went straight to playing.

The results suggest that following a narrative while playing an active video game may lead to increased physical activity and improved cognitive function. This follows Lu’s prior research showing that in children aged 8 to 11, stories embedded in active video games encouraged kids to play longer and more vigorously.

However, it’s not clear whether the improved working memory observed in the study resulted from the narrative itself, or from the increase in exercise. Hwang said future studies should take advantage of brain imaging capabilities to tease out the relationship between the narrative, the game, and neural activity.