Unpacking Review - The Things We Carry

Unpacking gave me the key to remembrance, unlocking corners of my mind where small memories that have subconsciously shaped me are tucked away.

One Christmas I gave both my grandmothers tiny ceramic angel bells with "Grandma" etched in blue ink. They probably cost five bucks each, purchased with my hard-earned allowance. These fell firmly into the category of sentimental and arguably tacky gifts that kids often give to parents and grandparents. They were nothing special then, but they are right above me on my desk shelf as I write this. When each of my grandmothers died--a decade apart--we found those insignificant angel bells prominently displayed in their homes. They went back to me as a keepsake, a reminder that even the smallest gestures of love can mean something big in time. Those angel bells, with progressively fading lettering, have been gently wrapped and kept safe throughout five moves. And no matter where I call home, the angels are next to each other, just a glance away.

Unpacking, a puzzle game of your own memories and psyche, taps into a wide range of emotions. It accomplishes this feat while managing to remain fun and relaxing, with soothing background music and a satisfying loop that gets more detail-oriented as life moves forward (or drags on).

From a bird's-eye view, Unpacking is a point-and-click game about performing one of the most dreaded tasks known to humankind: unpacking your stuff after a move. Unpacking has a singular mechanic-- you're just grabbing items out of boxes and placing them in your new humble abode-- and it's a straightforward experience that gives you the freedom to approach the art of organizing clothes, books, knickknacks, stuffed animals, electronics, and household goods as you see fit. While the loop never evolves, there's a joyous charm to a simplicity that lets you hone in on a single task. That said, those, who are looking for a layered puzzle game may find Unpacking to be underwhelming. 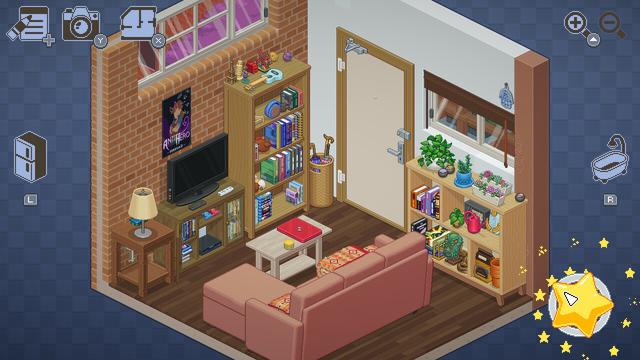 Unpacking tells a mostly wordless story starring an unseen young person making their way through life. It starts in 1997, when they are a child who has to organize a few boxes of toys in a small bedroom. Rooms are already furnished; you merely have to find a place for the items in the boxes. Years pass between each move, but the levels don't necessarily become more dense; instead, the scenarios evolve and complicate. For instance, they move into their partner's apartment, requiring you to squeeze their possessions between and around another person's stuff. Cohabitation can be tricky, especially when you're moving into a space already lived in by your roommate. Unpacking deftly conveys the challenges and excitement of getting a fresh start in a new place. At the end of each level, a photo of the new place is added to a scrapbook alongside a line of text commemorating the move.

And this is precisely how Unpacking became a profound experience for me.

You cannot see the items in the cardboard boxes. Once you click the box, a new item pops out from beneath the packing material. Seeing a stuffed pig from their childhood emerge from the box multiple moves later is a quiet joy. We all have things that we've kept for most of our lives and learning which of those possessions is meaningful to Unpacking's protagonist made me reflect on the things that I have kept throughout my moves--and why I keep them. Over the course of my roughly five-hour journey, I felt like I was getting to know this person simply by seeing the things they carried with them.

There are plenty of small moments here that stir strong emotional responses. For instance, when they settle into their dorm room, you can see how hastily they packed due to the bathroom products being located in bedroom boxes, and clothing that obviously had a matching item that was in a different box. I became irrationally annoyed when I only unpacked a single shoe from one box. Where was the second shoe? How can I organize this when things are so awry? And as the levels go on and the moves pile up, we see the chaos that is life represented by unkempt rooms and unopened boxes that have been sitting for days (maybe weeks) after a move. This made me care about organizing their rooms even more. They want their worldly possessions to be neat and tidy, right? Decluttering their living space will soothe their mind, yes? I thought about these things constantly while moving stuff around.

Unpacking does demand that you organize things in a somewhat conventional manner, but the vast majority of items don't have a designated spot. For the most part, you can organize however you like, as long as it isn't completely against the grain (you can't just toss stuff on the floor). Items will flash after everything is out of the boxes if they aren't in an appropriate space, and some of these cues subtly help tell the story of where this person has been and where they're trying to go.

That said, the freedom provided by Unpacking's very loose puzzle gameplay is what allowed me to reflect and project my own hardwired tendencies to the task at hand. It also reinforced some of my own habits when it comes to the things I own. As someone with obsessive compulsive disorder, Unpacking both heightened and soothed my quirks. Yes, I spent way too much time placing books on the shelves by size and making sure that the toy ponies and Troll dolls were placed in the "right" spot--there were two ponies and one Troll doll, so the Troll doll had to go in the middle, of course. Jackets, long-sleeve shirts, and blouses had to go on the few hangers I had, while t-shirts were folded and stacked by color.

Perhaps it's because Unpacking doesn't do anything to dissuade you from your choices, or maybe it's because the quick and intuitive process of moving and shifting items makes obsessive organizing a breeze, but I was reminded that it's not necessarily a bad thing to have particular tendencies that would seem weird to some people.

That's what makes Unpacking such a treat. I peered into the life of someone else and saw myself. It compelled me to look back on my own experiences, the good and the bad, through the simple act of unpacking the contents of their life. Unpacking may be a zen puzzle game that's just relaxing for some, but for me it was a more profound experience that I'll never forget. Sometimes we put our past into proverbial boxes; ripping off the tape and rediscovering what we hid away can be cathartic and illuminating.