Meanwhile, a powerful Russian missile cruiser simulated attacks on NATO submarines while lurking around a fjord near Norway’s northeast coast.

NATO’s Dynamic Guard exercise drew a powerful air and sea force, including the Canadian frigate Halifax and the Norwegian corvettes Steil and Storm. The German tanker Spessart supported the warships.

The frigate and tanker sail together under the auspices of Standing NATO Maritime Group One, or SNMG 1.

Two B-1s and at least one Norwegian F-35 flew in from Orland air base in central Norway. Three B-1s arrived at Orland on Feb. 22 for a so-called “Bomber Task Force” deployment lasting several months.

The exercise confirmed what observers predicted when the U.S. Air Force announced the B-1 deployment last month—the swing-wing bombers have come to Norway in part to prepare for a possible future sea battle with the Russian fleet.

The Dynamic Guard war game was defensive in nature. The exercise “provides opportunities for SNMG1 to enhance or otherwise validate our training, knowledge and expertise in electronic warfare and anti-ship missile defense in a unique and challenging operational environment,” said Commodore Bradley Peats, the Canadian commander of SNMG1.

The U.S. Air Force Is Gradually Rebuilding Its B-52 Bombers From The Rivets Out

An American Bomber Visited Malaysia. A Bizarre Mix Of Local Jets Rose To Meet It.

But anti-ship-missile defense is a corollary to offensive anti-surface warfare. In a ship-on-ship missile battle, opposing naval groups would volley anti-ship missiles at each other while trying to shoot down incoming missiles. The group that both defends itself—and overwhelms the enemy’s defenses—wins. 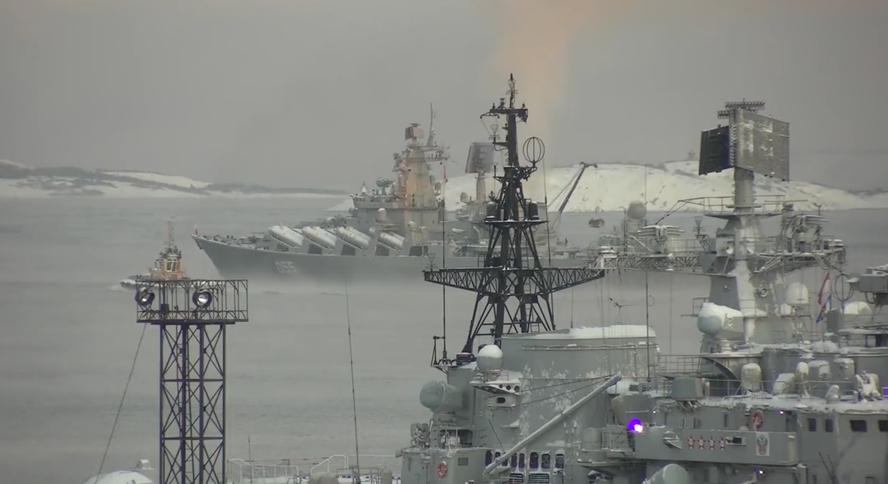 It’s pretty clear how Peats disposed his forces. The frigate Halifax, displacing 4,800 tons loaded, was the biggest of the three combatants in the NATO flotilla—and the most lavishly equipped. Halifax packs a Sea Giraffe radar and two eight-cell launchers for 27-mile-range Evolved Sea Sparrow anti-air missiles as well as an SLQ-505 radar-jammer.

By contrast, the Norwegian corvettes—each displacing just 275 tons—lack long-range radars and any surface-to-air missiles. They sport CS-3701 jammers but obviously cannot pump as much power through the jammers as the larger frigate can do with its own electronic-warfare system.

In wartime, frigates such as Halifax would sail alongside corvettes such as Steil and Storm, protecting the smaller ships from Russian anti-ship missiles and helping the smaller vessels get close enough to the Russians—a hundred miles or so—to fire their Naval Strike Missiles. It’s worth noting that Halifax herself carries eight 100-mile-range Harpoon anti-ship missiles.

It’s unclear what role the B-1s and F-35 played in Dynamic Guard. But in wartime, B-1s with their new 300-mile Long-Range Anti-Ship Missiles would be among the most power ship-killers in the theater. F-35s could protect the bombers while the big planes press their attacks.

Dynamic Guard demonstrated how NATO could go after the Russian navy—with a mixed sea and air force combining offensive and defensive missiles.

Submarines obviously would play important roles, as well—locating and attacking Russian ships and protecting NATO vessels from Russia’s own subs. So it should come as no surprise that while NATO’s ships and planes were playing war on Norway’s west coast, the Russian fleet staged an anti-submarine exercise on the country’s east coast.

The Russian cruiser Marshal Ustinov in early February sailed from Severomorsk in northern Russian into the Barents Sea. “For several days, the ship's crew will practice combat and daily organization at sea, conduct a number of general ship exercises on damage-control, [nuclear-biological-chemical] protection, as well as anti-aircraft and anti-submarine defense,” the Kremlin announced.

Training complete, the cruiser sailed back toward Severomorsk—and made an interesting detour. On Feb. 22, the 12,500-ton cruiser—which with her 104 anti-air missiles and 16 300-mile P-500 anti-ship missiles is one of the most powerful surface combatants in the world—looped south into the Varanger Fjord, which lies west of Russia’s Fisher Peninsula. The Russian-Norwegian maritime border cuts through the fjord.

“Such sailing west of the Fisher Peninsula is something we haven’t seen in recent times,” Maj. Brynjar Stordal, a spokesperson for Norway’s joint headquarters, told The Barents Observer.

It’s worth noting that Marshal Ustinov’s southward jaunt took place at the same time the B-1s were arriving in Norway.