President Donald Trump is sitting down Thursday afternoon with the video game industry, more than a week after he suggested that violent games can breed dangerous thoughts in young people.

"The video games, the movies, the Internet stuff is so violent," Trump said at a White House meeting on school safety last week. The meeting was held in the wake of a deadly school shooting in Parkland, Florida.

"It's hard to believe that, at least for a percentage — and maybe it's a small percentage of children — this doesn't have a negative impact on their thought process," he added. "But these things are really violent."

Those words might sound familiar. Politicians and other public figures have a long history of viewing the gaming industry as a catalyst for acts of violence.

The debate over brutality and bloodshed in video games stretches back decades: The '70s arcade game "Death Race," for example, drew public ire because it allowed players to run over enemies for points.

But the debate's "watershed moment" didn't come until just before the turn of the century, according to Chris Ferguson, a psychology professor at Stetson University who has written extensively about video games.

After two teenagers killed 12 of their peers and a teacher at Columbine High School in 1999, it was widely reported that they had played the shooter game "Doom."

"The tone after Columbine was one of absolute certainty," Ferguson told CNN this week. "Society was absolutely behind this issue of linking video game violence to mass shootings."

Less than a month after the shooting, the former House Speaker and Republican Newt Gingrich said that "Hollywood and computerized games have undermined the core values of civility."

Democratic President Bill Clinton asked the federal government that June to look into whether media companies, including the video game industry, were marketing violent content to young people.

In the months and years that followed, politicians continued to turn a critical eye toward games.

Hillary Clinton, for example, campaigned against violence in games as a Democratic senator in the mid-2000s. She sponsored a bill that would have penalized the sale of adult games to minors. 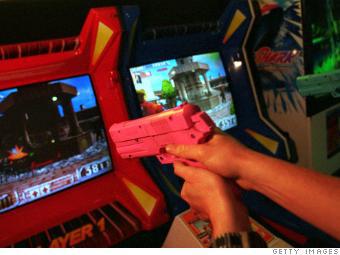 The bill never passed, and similar efforts at the state level were eventually overturned in the courts. The Supreme Court ruled in 2011 that California could not ban the sale of violent video games to children.

Writing for the majority, Justice Antonin Scalia said that video games deserve First Amendment protection. He also cast doubt on the idea that violence in games could cause real-world acts of aggression.

"Psychological studies purporting to show a connection between exposure to violent video games and harmful effects on children do not prove that such exposure causes minors to act aggressively," Scalia wrote. "Any demonstrated effects are both small and indistinguishable from effects produced by other media."

That decision — and the research into connections between violent games and violent behavior — did not quell the debate.

"There were politicians on both the left and the right who were expressing concern about violence in video games," Ferguson said.

In 2012, when a 20-year-old man killed dozens of children at Sandy Hook Elementary School, Senator Lieberman, now an Independent, said that young men who commit mass shootings "have had an almost hypnotic involvement in some form of violence in our entertainment culture, particularly violent video games."

Advocacy groups on both sides of the gun debate also criticized the gaming industry, though to different ends.

Moms Demand Action for Gun Sense, which promotes gun control, called on the gaming industry in 2013 to cut ties with weapons manufacturers that allow developers to feature real-world guns in games.

President Barack Obama called for Congress to fund research into video game violence as part of a 23-point plan to reduce gun violence. And Vice President Joe Biden met with members of the video game industry and researchers, including Ferguson, at the White House.

After the most recent shooting in Parkland, Florida, however, Ferguson said the debate has shifted. (It's not entirely clear how influential video games were on the shooter, though the Miami Herald reported that he played them.)

A Florida Republican representative told NPR that the "biggest pusher of violence is, hands down, Hollywood movies, hands down, the video game market." And Kentucky's Republican governor told a local radio station that some video games "celebrate the slaughtering of people."

"It's been Trump and mostly Republicans," Ferguson said of the changing debate. "It seems in some ways to be a more deliberate effort to shift the conversation maybe away from gun control onto video games."

The debate has evolved among advocates for gun control and reform, too. Five years after it said that the "link between video games and real-world violence continues to be investigated," Moms Demand Action shied away from placing any specific attention on video games. The organization told CNN on Tuesday that business leaders "regardless of industry" should promote gun safety — and that video games weren't the cause of the country's gun violence.

"Americans play the same video games, watch the same TV shows and experience mental illness at the same rates as our peers in other high income nations," founder Shannon Watts said in a statement to CNN. "What separates America is our weak gun laws and unacceptable rates of gun violence. Americans want action on gun safety, not video games."

Tags： do video games lead to violence cnn cable news network
Latest： How much is my game console worth? in Sep 2021 - Game Console Dojo
Next： Top 10 HOW TO USE MOUSE AND KEYBOARD ON XBOX ONE Resources
Popular Articles/span>