The global semiconductor shortage can be explained by the bullwhip effect

At the end of 2020, semiconductors were suddenly in short supply. Bleeding-edge chips powering the latest smartphones, gaming consoles, and 5G modems, as well as older models running cars and household appliances, could hardly be found at any price. Goldman Sachs estimates at least 169 industries faced disruptions as a result of the shortages, potentially shaving 1% off US GDP in 2021.

All this began with a relatively minor bump in consumer demand brought on by the pandemic. First, consumer spending tanked. Then, a few months later, demand for all kinds of chip-heavy gadgets rose unexpectedly as people set up home offices or sought out electronic diversions. The companies that build those devices then sent a wave of semiconductor orders rippling up the supply chain, which quickly overwhelmed the few chip foundries that manufacture virtually all of the world’s computer chips. Shortages ensued.

And these same forces that snarled the supply chain for computer chips are the ones that also led to desperate shortages of toilet paper and bicycles. It’s an economic phenomenon so well known it even has a name.

“We call this the bullwhip effect in supply chains, and this happens all the time,” said Harvard Business School professor Willy Shih, who runs an exercise every year with his students called the “beer game” to illustrate the phenomenon and its disastrous effects (more on that later).

Understanding the bullwhip effect can give us a better idea of how the chip shortage started and why it’s causing such widespread economic pain today. It can even show us how the chip industry can dig its way out of its current crisis.

What is the Bullwhip Effect?

The phrase “bullwhip effect” was coined by Stanford business school professor Hau Lee, who was trying to understand why the supply chain for diapers was experiencing wild swings in order volumes even though consumers buy diapers at a relatively constant rate. He found that even small changes in demand for diapers triggered larger changes in retailers’ wholesale orders. That set off even bigger swings in manufacturers’ demand for the materials to manufacture diapers.

Lee compared what he observed to a cowboy cracking a bullwhip. Although a cowboy’s hand might only move a few inches, the ripple down the length of the whip grows larger until the tip of the whip snaps several feet through the air. This bullwhip effect explains how these small shifts in demand for certain goods ripple up the supply chain, causing bigger and bigger swings in production. Since they can’t predict the future, retailers introduce errors when they scale up their orders in response to expected demand. Wholesale suppliers magnify that error when they adjust their own orders to manufacturers’. Even more error is introduced when manufacturers order raw materials from their suppliers, and so on. The further up the supply chain, the more demand signals become distorted.

That’s what happened to the supply chain for semiconductors last year. Manufacturers of phones, automobiles, and consumer electronics, eager to ramp up production, rushed orders in for more semiconductors. That created a sudden surge of demand for suppliers like Huawei, Qualcomm, and NVIDIA, which design and sell the chips found in everything from Nissans to iPhones. These companies then put in their own wave of extra orders with suppliers: manufacturers like TSMC, Samsung, and Intel that run foundries with the capacity to assemble advanced semiconductors. That created an even more overwhelming crush of orders for the companies that supply the foundries with basic parts. 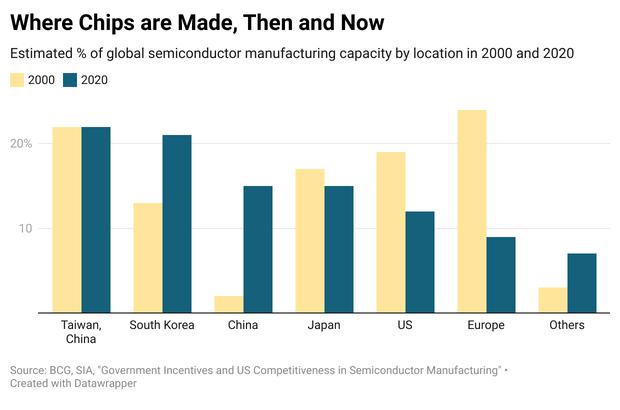 Soon industries with no connection to electronics were facing shortages as chip foundries fielded far more orders than any supplier could fulfill. Backlogs began to pile up. Today, wait times for new chip orders stretch to the end of 2021.

The obvious reaction to any shortage is to simply make more of whatever is in short supply. Indeed, semiconductor manufacturers have already announced investments in foundry expansions and new factories that will increase supply. But those projects won’t be completely finished until the end of 2022 at the earliest.

Shih says this is where suppliers can run into trouble. “What happens is, supply gets tight, prices go up, and then everybody says, ‘Oh, let’s build another factory.’ But another factory takes two years to build,” said Shih. In that time, demand might fall and the immediate shortage might ease. “Just when the new factories come online, there’s all this excess supply and then prices collapse and no one wants to build another factory for a while.”

This dynamic can create a disastrous cycle for the industry: When suppliers stop building new factories, demand gradually grows until it falls in line with supply. At that point, small shifts in consumer demand can once again create big shocks to the supply chain thanks to the bullwhip effect. Shortages beget supply gluts, which eventually lead to shortages again. All this means that chip suppliers need to carefully plan their expansion, or else they risk producing a semiconductor glut in the next few years, which could be followed by another shortage.

How to prevent the next chip shortage

Every year, Shih plays a supply chain simulation with his students called the Beer Game. (You can try out a version of the game by yourself or with friends.) Each player represents a company in the supply chain for six-packs: grocery stores that sell beer, wholesalers that ship it out to retailers, breweries that make the suds, and so on. Every company has to make decisions about how much beer to order from its supplier based on incomplete information about what’s happening in the market.

It’s not easy, even when you understand the basic business principles at play. Every year, Shih tells his students about the bullwhip effect before they start the game, and he warns them that hoarding supplies will only make it worse for everyone. And every year, the students start hoarding anyway. “Even though students know the bullwhip effect is going to come, they still do it because they’re trying to game their competitors,” he said.

That, in a nutshell, explains another dynamic that is exacerbating the shortages in the semiconductor supply chain. “The problem right now is there’s a lot of panic buying going on,” said Shih. Worried about the chip shortage, every company is trying to stockpile chips to last them through the crisis. But hoarding further distorts the demand signals that are rippling through the supply chain, making it seem like companies need far more chips than are truly necessary to meet consumer demand.

It’s hard to convince any individual company not to do it, Shih says, even though it harms everyone: “If you’re HP or Dell or Lenovo, you’re thinking, ‘I’m going to make sure I have enough chips on hand because I’ll be damned if I let my competitors gain market share because they’re in a better supply position than me.”

The market, in other words, needs a central arbiter to determine how many chips each company really needs and ensure no single player can acquire a massive stockpile of chips while others have to shut down factories because they have none.

In the semiconductor world, the job of restoring rationality to the supply chain falls to the foundries. Amid the shortages, chip manufacturers such as Broadcom are now assigning allotments to each of their customers, regardless of how many semiconductors they ordered. In the near term, while they work on ramping up supply, the foundries hope they can ration enough chips to each of their clients to help them stay afloat.

“It’s all about being able to tell your customers…to behave in a rational manner,” Broadcom CEO Tan Hock Eng said on a March 4 earnings call. “We have a reasonable process in place that ensures that our customers get the products—maybe just in time, but they do get the products when they need them.”

If the chip suppliers do a good enough job of estimating their customers’ true needs, politely refusing orders to prevent hoarding, and getting the right chips to the right people at the right time, they can help the industry sail out of these troubled waters. Already, TSMC has announced it will raise the number of chips headed to car manufacturers, which has been one of the worst-hit industries in the crisis.

It won’t be easy. But for everyone’s sake, the chipmakers are trying to project an image of rational calm. “This is not a panic mode,” Eng said in the final moments of the earnings call. “This is a very structured and reasonable process.”