Age Range: A 5-year-old will have fun making sounds with it; older kids and adults will better be able to take advantage of its capabilities
Power Source: Internal battery, USB-C
Audio: Built-in speaker, headphone jack
Connectivity: MIDI out (via Bluetooth or USB-C) 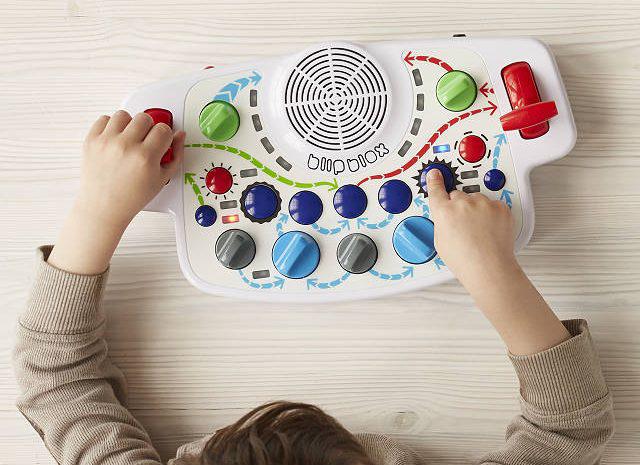 Designed by parents and synth designers David Menting and Toon Welling, and manufactured in Utrecht, the Netherlands, the Dato DUO got its start as a Kickstarter campaign in 2016. The instrument is based on a simple premise: Making music is best when it’s a collaborative activity. This compact little sequencer/synthesizer unit is designed to be played by two people at once. On the sequencer side, there’s a colorful row of keys and an eight-step circular sequencer, plus controls for basic functions like tempo control, key transpositions, and note length. On the synth side, three sliders allow you to morph parameters like waveform, filter frequency, and release. (Within about 30 minutes of taking it out of the box, my daughter had discovered what she called “the chicken sound,” a faintly acidic squawk resulting from a just-so combination of cutoff, release, and envelope settings.) And there’s more: Glide, bit-crush, and “overdrive” buttons let you add dynamic accents in real time; a lovely little delay adds a dubwise hint of mystery; and the “detune” knob lets you create harmonies across the instrument’s two oscillators. Oh, and there are even a pair of touch strips for playing kick, snare, and hi-hat sounds with your fingertips.

The end result is a simple-to-use yet remarkably full-featured machine that’s fun for one person to use and an absolute blast when two people are jamming together. (The pyramid shape is a stroke of genius; hunched over it, it reminds me of playing Battleship as a kid.) The designers have clearly put a lot of thought into the DUO; there are enough parameters to give players real control over the sounds, but not so many that they become intimidating. The circular sequencer and monophonic output—that is, just one note at a time, avoiding clashing dissonance—make it simple to generate ear-pleasing loops, while the controls keep playback dynamic. And the plethora of expansion options (audio out, MIDI in/out, sync in/out) mean that the DUO can easily be incorporated into a growing arsenal of instruments as your kid grows—or, you know, folded into Mom’s or Dad’s home studio of assorted modular gear.

While the price tag may be steep, of all the kid-friendly synths I’ve tried, this one has the best sound of all—for proof, just check this demo track by veteran IDM producer Solvent, made using only sounds from the Dato DUO’s synth and sequencer, which were then layered and arranged in Ableton. There’s no doubt about it: This gorgeous little groovebox is the real deal.