Playing video games may increase adolescents’ risk for developing symptoms of ADHD, according to a new study published in the Journal of Attention Disorders that shows a positive correlation between hours of video game play at age 12 and the likelihood of self-reported symptoms of ADHD at age 13.1 Contradicting previous research that links ADHD to video game addiction, the study data surprisingly did not show that children with ADHD seek out video games more so than their neurotypical peers.1

Researchers used a cross-lagged panel model to analyze both directions of the association between video-game engagement and ADHD symptoms. Participants included 1,467 Canadian youth (754 girls and 713 boys) between the ages of 12 and 13 who self-reported weekly hours of video game play (rated on a scale from zero hours per week to more than 20 hours per week), and ADHD symptoms of inattention and hyperactivity at both 12 and 13 years of age (Participants rated ADHD symptoms on a three-point scale from “Never true” to “Often or very true.”). Data was collected between 2010 and 2011.

“It should be emphasized that the impact of video game play on increasing ADHD symptoms, although statistically significant, was modest. The clinical implications of these findings thus remain unclear,” wrote David Rabiner, Ph.D., in a recent Attention Research Update newsletter. “It is also not clear whether video game play may need to be above a certain threshold level before it may contribute to an increase in ADHD symptoms while lower levels of engagement are not associated with any risk.”

While this study provides evidence that video game engagement is a relevant risk factor, it is not the only or even the main cause of hyperactivity or inattentive ADHD symptoms.

“Our data show that video game engagement makes a small but significant impact on ADHD,” wrote the study authors. “We should note, however, that the effect size of video game engagement on ADHD symptoms was small. This suggests that multiple risk factors including genetics, sex, and socioeconomic status are likely to contribute to the cumulative risk of developing ADHD symptoms.”

Indeed, ADHD is highly heritable; a meta-analysis estimates a heritability of about 70% for hyperactivity and 56% for inattention.2 Environmental factors, such as low socioeconomic status, family dysfunction, childhood maltreatment, and television watching may also play a role in developing ADHD symptoms.3, 4, 5

The Prevalence and Neurological Impact of Video Games

A 2021 survey published by the Entertainment Software Association estimated that 20% of video game players in the U.S. are under 18, and 74% of American families have a child who consumes video games.6

Video games reward, engage, and may release “feel good” hormones in users.7,8 Studies show that the amount of striatal dopamine released during video game play compares to the levels of dopamine released from alcohol and psychostimulant drugs.9,10,11, 12 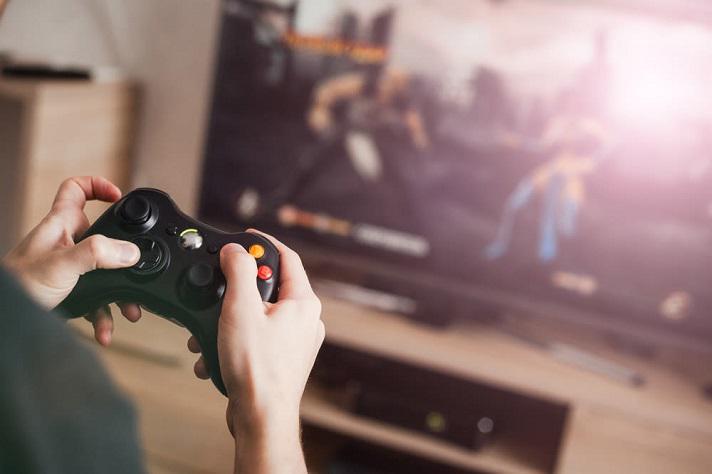 “The key to using screen time productively, for many families, is the establishment of a parent-child agreement and system designed to maximize the value of electronic tools and to minimize the downside,” says Wes Crenshaw, Ph.D., who led a 2018 ADDitude webinar titled “Screen Time for the ADHD Brain: Technology Rules and Systems for Easily Distracted Teens.”