RELATED: Check out the new and improved FOX Sports app

A sports law attorney says the outcome of the final court ruling could have a major impact on WIAA enforcement going forward, but this tournament could very well be over before a decision is made.

Many are wondering what’s next for the St. Thomas More team in the courtroom.

"Weeks or months down the road, the judge will decide the permanent injunction," said Sam Hall, attorney.

On Wednesday, a judge granted a temporary restraining order to stop the WIAA from advancing the bracket until Thomas More played Brown Deer High School again Thursday night. Thomas More took the WIAA to court for suspending their varsity team after a fight at the end of a win against Fuller Collegiate Academy emptied the bench Friday night, March 4. That's against the rules, and even players who were not at the game were suspended.

Saturday, St. Thomas More chose to forfeit instead of calling up JV players in the regional title against Brown Deer. Wednesday, after the school sued the WIAA, a judge reinstated the team, ordering this game to be played. 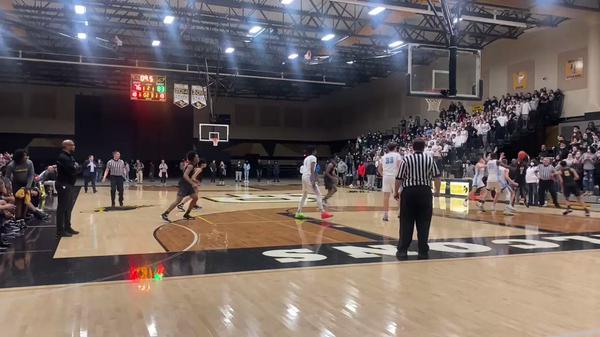 In the meantime, there’s debate on whether the rule regarding the clearing of the bench applies to players already on the court and those not even at the game.

"We are seeing more and more that the courts are willing to step in and evaluate claims," said Hall.

Hall has experience in sports law and representing schools. He says the courts are selective.

"It’s hard to imagine a scenario where the courts would intervene, whether a foul call should have been a charge or a block or anything like that," said Hall.

The WIAA says it "has the responsibility to uphold the integrity of the rules of education-based athletics as established by the member schools."

"The players are going to determine how far they go," said Hall. "I think at this point they have a second life."

Legal experts await the ruling and its impact.

"A decision like this will force the WIAA to take a closer look and to be a little more precise when making these determinations," said Hall.

Thursday night's game was originally scheduled at Thomas More. The WIAA said a last-minute change brought the game to Brown Deer due to the size of the arena and the expected crowd.

Watertown Police and Fire responded to a serious crash near Welsh Road at the Highway 26 overpass shortly after 4 a.m. Thursday, March 10.

Caledonia police are asking for the public's help to identify a burglary suspect who has hit twice in the last month.

Tags： how to play the game of life electronic banking instructions
Latest： Build a custom email digest by following topics, people, and firms published on JD Supra. New cyber security and software update rules in the automotive industry in 2022 "My best business intelligence, in one easy email…"
Next： Simple Online Security for Selling or Donating Devices
Popular Articles/span>