PSA: You Can Say No to Face Scans for Airplane Boarding

"Attention passengers. As part of our boarding process today, you won't scan your boarding pass. Instead, remove any face covering you may be wearing and look into the camera next to the gate, which will scan your face. That will identify you for boarding."

I was waiting to board a US domestic flight on Delta out of Atlanta when I heard that announcement. Delta has been testing face scan boarding(Opens in a new window) since 2018, according to The New York Times, but it was the first time I had encountered it. The gate agent repeated the information at least twice more, but with no further detail.

Before I rant and rave about all the reasons the announcement was so problematic or why the casual use of facial recognition technology is the biggest mistake being made with technology today, let me cut to the chase and tell you the two most important things:

Now, back to my rant.

No One Explained Face Scanning Is Optional

When I heard this announcement before boarding my flight, I was both appalled and angry for a few reasons. What infuriated me most was that the gate agent didn't say that face scanning was optional. She never said it was mandatory either, but the tone was, this is what we're doing.

In airports, we tend to do what we're told, like take off our shoes and throw out a perfectly good bottle of moisturizer because it's 3.5 ounces. We all know that if you don't follow the rules, you could get pulled aside, hassled, detained, or worse.

If you aren't sure whether you can opt out, ask! Don't just go along with it.

In this scenario, I honestly didn't know whether I could opt out, but I wanted to. So I asked. "Hi, excuse me. I have a question," I said to a different agent at the desk. "Can passengers decline consent for the facial scanning and still board?" I was met with a flippant "yeah" that sounded to me more like, duh, of course you can, don't be stupid.

When it was my turn to board, I said, "I don't consent to the biometric data," and the gate agent said, "No problem," pressed pause on the camera, took my boarding card, and scanned me in. That was that. 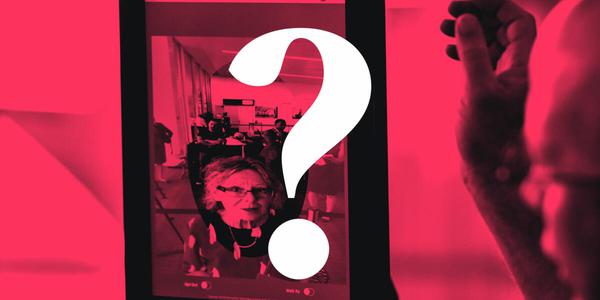 Who, What, Where, When, Why Went Unaddressed

What left me fuming was that the announcement provided no details whatsoever. And, boy howdy, did I have questions. Who runs this process? What is its purpose and how does it work? Is the image of my scanned face being stored somewhere? If so, where? Is it encrypted? For how long will the company or the airline keep this scan of my face? Can it be sold, or shared with law enforcement agencies, or given to governments?Even if you can find answers(Opens in a new window) to some of these questions(Opens in a new window) online, you can't realistically do such research in the airport five minutes before you board your plane.

How are passengers supposed to make an informed decision about using facial recognition technology at the airport gate, where they're already stressed out, when no one even tells them it's their decision to make? People are likely to go along with it for fear of making the already exhausting experience of air travel worse by putting up a fight.

As I mentioned, it is not a hassle in the least to say no—at least not in my experience. So, please: Feel free!

The experience I've recounted here relates specifically to boarding a US domestic flight. The rules are not the same for biometric data, including face scans, collected at border crossings, immigration services, or visa application windows—much less flights in other countries.

Barely Communicated and at the Last Minute

One last issue is about the announcement: It was only given orally over the awful public announcement system at the gate. Anyone who wasn't at the gate at that time would have missed it, and anyone deaf or hard of hearing may have also missed it. There were no push notifications about it in the Delta app, no signs in the gate area, no monitors with the info either.

How can anyone make an informed decision in these conditions?

Recommended by Our Editors

We Should Be Wary of Facial Recognition Technology

The question a lot of people might ask is whether it's worth getting worked up over facial scanning in the first place. I say it is. My colleague and senior security analyst at PCMag Max Eddy thinks so, too, and put it best when he wrote:

"Facial recognition is bad. It's really bad. It's a poor system for verifying identity or intent, it's overly permissive, and it trains us to be okay with having our face scanned."

The idea of intent is important to unpack. When you enter a PIN or even place your fingers on a fingerprint reader, you're taking explicit action and you at least have an inkling what it's for. But face scanning can happen passively without you showing any intent much less consent.

Can You Always Opt Out of Face Scanning?

Not all airport face scanning is used for boarding planes, and not everyone can opt out. Sometimes it's used at the border by the Department of Homeland Security or Customs and Border Protection. Sometimes the Transportation Security Administration asks you to look at a camera before you enter airport security screening.

The real problem is there isn't enough education about all these procedures and who can opt out of them. Are you required to unlock your phone if asked by CBP, for example? The lack of education isn't just on the traveler's side either. In 2019, an ACLU lawyer who is a US citizen documented a CBP officer denying him his right to opt out(Opens in a new window) of having his image captured at a land border. In that instance, US citizens have a right to decline, but foreign nationals do not.

Maybe we should have a sort of Miranda Rights for travelers, a summary of what you can do or refuse to do that gets popularized by television and movies until nearly everyone has at least a cursory understanding of what it means.

If I can impress on you one thing about facial recognition technology it's this: If you aren't sure whether you can opt out, ask! Don't just go along with it. That said, not everyone has the same interaction experience with people in positions of authority, and I absolutely understand that not everyone may feel comfortable speaking up in such a position, especially if you're worried you might be denied boarding. Technically you shouldn't, but I understand why some people may be concerned.

Either way, it's shameful that the ability to opt out, or the conditions one must meet to qualify for opting out, aren't being made explicit. They should be. If enough of us ask questions, opt out when possible, and occasionally be a little annoying about it, it'll likely be better for all of us.

Get Our Best Stories!

Sign up for What's New Now to get our top stories delivered to your inbox every morning.

This newsletter may contain advertising, deals, or affiliate links. Subscribing to a newsletter indicates your consent to our Terms of Use and Privacy Policy. You may unsubscribe from the newsletters at any time.


Thanks for signing up!

Your subscription has been confirmed. Keep an eye on your inbox!

Sign up for other newsletters
Tags： how does the electronic software association organize games
Latest： Two-Card Monte: Why Mastercard And Visa Rarely Shut Down Scammers Who Are Ripping Off Consumers
Next： Video game workers found their voices in the pandemic. Could unions be next?
Popular Articles/span>