Opinion: The latest sign of lost youth is pickleball’s popularity

Life sometimes presents signs that you have completely given up on your youth. An example: You proudly present your AARP card to request a senior discount at the restaurant where you’re having dinner.

Other telltale signs: You find it acceptable to wear socks with your sandals. You sing along in the car to the Monkees’ greatest hits. You have an AOL email account. Or you repeat dumb things like, “Well, age is just a number.”

Lately, I’ve noticed a new sign that you’ve quit on life. It’s all around us, people are raving about it, and it looks utterly ridiculous to anyone who isn’t a freak for it. Yet, like folks who can’t stop talking about their keto diets, those who indulge cannot stop chattering.

Enough with the pickleball stories already.

Trust me, no one cares that you almost made the Sun City Pickleball All-Stars. Because you look ridiculous playing midget tennis with a wiffleball standing on a life-sized pingpong table.

No, I have never played pickleball. And yes, I still feel eminently qualified to comment on “America’s fastest-growing sport,” as christened by umpteen news outlets recently. 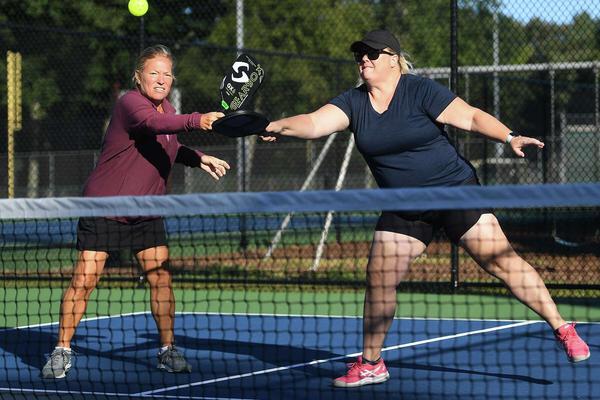 There’s even a USA Pickleball Association, headquartered out of a P.O. box in that noted sports mecca Surprise.

The most amazing statistic is that 4.8 million pickleball players told 480 million boring pickleball stories to the remaining 325 million Americans who don’t play.

Here’s a handy guide about sharing tales of pickleball hijinks. Ask yourself, “Did anyone playing pickleball in this story require a portable defibrillator or leave the court in handcuffs after committing felony assault or murder?”

If the answer is “no,” do not tell your pickleball story.

Look, I get it. You’ve discovered a hobby you truly love, you’re an early adopter of a great awakening across the land, and you want to share your pickleball passion. I felt the same way once. I was 12 years old, and my parents got me Electronic Battleship for Christmas.

That lasted three hours, until I lost half the pieces, or about as long as it takes your average 89-year-old pickleball aficionado to cover the game’s 20-foot-by-44-foot court. Incidentally, that’s one-third the square footage of a tennis court, a selling point often cited by pickleballers.

As in, “Dude, the court’s so small, anyone can play. It’s not even exercise. You barely have to move!”

Not that pickleball is all bad. The game does have controversy. Invented in 1965 by three boring rich families, the McCallums, Browns and Pritchards, who summered on Bainbridge Island outside Seattle, there is some dispute about the origin of the game’s name.

The Pritchards say wife JoAnn, an avid rower, named it. As she tells it, “The name of the game became pickleball, after I said it reminded me of the pickle boat in crew where oarsmen were chosen from the leftovers of other boats.”

The more colorful legend, offered by the McCallums and Browns, is that the game was named after the Pritchards’ cockapoo puppy, Pickles, who loved to interrupt matches by running off with the wiffleball.

I love good dog stories. And when it comes to pickleball, I’m glad for two things. One, that pickleball lovers didn’t instead take up fantasy football. Now those stories are godawful. And two, let’s be glad the dog wasn’t named Chewbarka or Poopsy. Then this column would have been a three-part series.

Tags： how to play battleship electronic game
Latest： www.thegamer.com 10 Board Games That Are Over Two Decades Old But Still Popular
Next： Utilities Amped Over Cash Flow Gains From Digitized Bill Payments
Popular Articles/span>