Fans also weighed-in on social media with ringing endorsements for their "other mothers." Shirley Partridge was revered for carrying the load as a single mom -- "Shirley Partridge didn't have a housekeeper or a husband but she made it work." Fans of Edith Bunker noted, "Edith wasn't just a doormat for Archie. She supported Gloria's feminism." But in the end Mrs. C was "...ahead of her time. She accepted her kids' friends and supported their dreams." Another crowned her as "...the Mom we all wanted."

The tournament was sponsored by Boom Again, a pop-culture trivia game celebrating Baby Boomers. "Boomers grew up with a new medium called television," according to famed game creator Brian Hersch. "We were introduced to an array of different families who reflected who we were and what we were becoming. And TV's Moms were always at the center of the action." 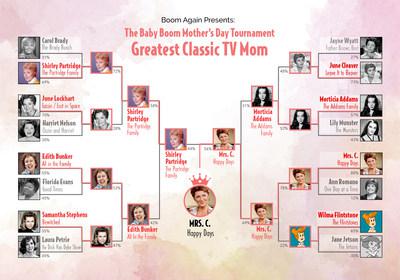 Hersch is the inventor of mega-seller games like Taboo, Outburst, Malarkey, and Super Scattergories. A Baby Boomer from Los Angeles, Hersch's games have sold over 50 million copies worldwide. It was that reputation which helped secure celebrity images like Paul McCartney, Lucille Ball, and John Belushi for the Boom Again cover.

ABOUT THE BOOM AGAIN POP-CULTURE GAME

The game asks players to remember universal experiences that Boomers have lived through, making the game a non-intimidating, laugh-filled party. Its thousands of questions focus on Boomer pop culture, including advertising slogans, TV shows, rock and roll, movies, commercial jingles, school memories, and all the myriad lessons Boomers learned out on the street. It brings back memories ranging from "The Ed Sullivan Show," and "I Love Lucy" mixed-in with schoolyard games, protests in the street, mini skirts and more. It covers everything from The Twist to Disco, Hula Hoops to The Pill, Doris Day to Janis Joplin, Bob Hope to Steve Martin.

Boom Again banks questions into unique categories like, "Things We Heard", "Things We Saw," "Stuff We Learned on the Street," and more. The game features Boomer touchstones as game tokens: like a real roller skate key, a Vietnam-era dog tag, a Kennedy For President button, and a roach clip.

Boom Again can be purchased at BoomAgain.com and on Amazon.

Headquartered in Los Angeles, Hersch Games was founded in 1985. Over the last 36 years, the company has established its reputation as an industry leader within the arena of social-interaction board games. Selling more than 50 million games and generating more than $1 billion in retail sales, Hersch Games continues to leave its mark on players around the world with successful titles such as TABOO, OUTBURST, MALARKEY and SUPER SCATTERGORIES. Using addictive play patterns and socially relevant content, Hersch Games builds innovative and memorable interactions focused on commonalities to facilitate a good time between players.