The AFL is pleased to announce a line-up of award-winning Indigenous Australian artists will perform at the annual Dreamtime at the 'G match on Saturday May 21.

Aboriginal electronic duo, Electric Fields made up of vocalist Zaachariaha Fielding and keyboard player and producer Michael Ross will join King Stingray as part of the pre-match entertainment, presented by Coles.

Football fans will also be treated to a half-time performance by up-and-coming vocalist Kristal West, who is the granddaughter of Indigenous land rights activist, the late Dr Eddie Mabo.

EVERY INDIGENOUS JUMPER Vote on your favourite

In addition, both Richmond and Essendon will perform their annual team War Cry prior to the match while North East Arnhem Land man Watjarr Garmu will play the Yidaki (digeridoo) after each goal kicked throughout the game.

AFL Executive General Manager Customer and Commercial Kylie Rogers said it was wonderful to have a host of Aboriginal and Torres Strait Islander artists perform at the annual Dreamtime match.

"We know how important the contribution of Aboriginal and Torres Strait Islander peoples are to our game both on and off the field, so we're thrilled to have Electric Fields, King Stingray and Kristal West perform in the Dreamtime at the 'G entertainment as part of our Sir Doug Nicholls Round celebrations," Ms Rogers said. 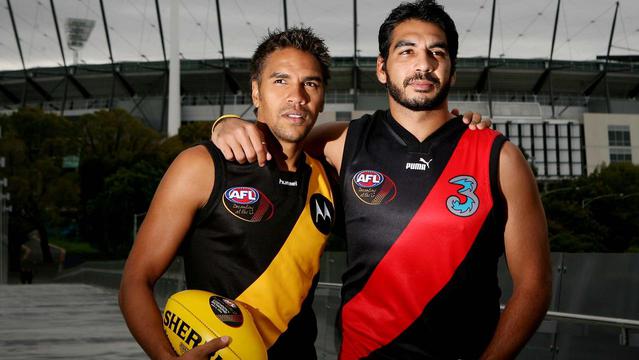 "I'd like to thank Coles for their support of the Dreamtime at the 'G entertainment and look forward to seeing the return of thousands of fans at the MCG for this much-loved occasion."

Named as the 'movers for the next generation', Electric Fields combines electric-soul music with Zaachariaha's culture and often features traditional languages of the Anangu Pitjantjatjara Yankunytjatjara people.

One of the most exciting and unique bands emerging from North East Arnhem Land, King Stingray blends ancient Indigenous melodies with surf, indie and funk influences to create a unique sound of their own: Yolŋu surf-rock.

A Manbarra, Palawa woman with strong connection to her Piadram roots, Kristel West found a national audience in 2014 after becoming a Grand Finalist on The Voice Australia.

Mentored by American rapper will.i.am as part of the duo ZK, Kristal has gone on to win a nationwide Alukura songwriting competition, performed in The Voice Top 8 National Tour and released her latest single ‘Nibe Nibe' as a tribute to her late Grandfather, Dr Eddie Mabo.

"Coles has been a long-standing partner with the AFL through the elite men and women's competitions and is proud to extend our support for the Dreamtime at the 'G Pre-match and Half-Time entertainment that is sure to be a spectacular celebration of Aboriginal and Torres Strait Islander culture."

Gates for the Dreamtime at the 'G match will open at 2:30pm, with the pre-match entertainment to commence at 6:30pm (AEST).

Tickets for the Dreamtime at the 'G match are available via Ticketek, while fans can tune in to watch the event live on 7mate.

Dreamtime at the 'G schedule: