Monopoly has been around, in one shape or another, for over a century, so it’s probably a safe bet that every single person reading this review has played a game or two at some point. The rules are simple: bankrupt every single other player in the game and attempt to take control of the entire board. In the current financial climate, where everyone is trying to grab as much money as they can no matter who they have to knock out of the way in the process, playing Monopoly has never felt more apt. 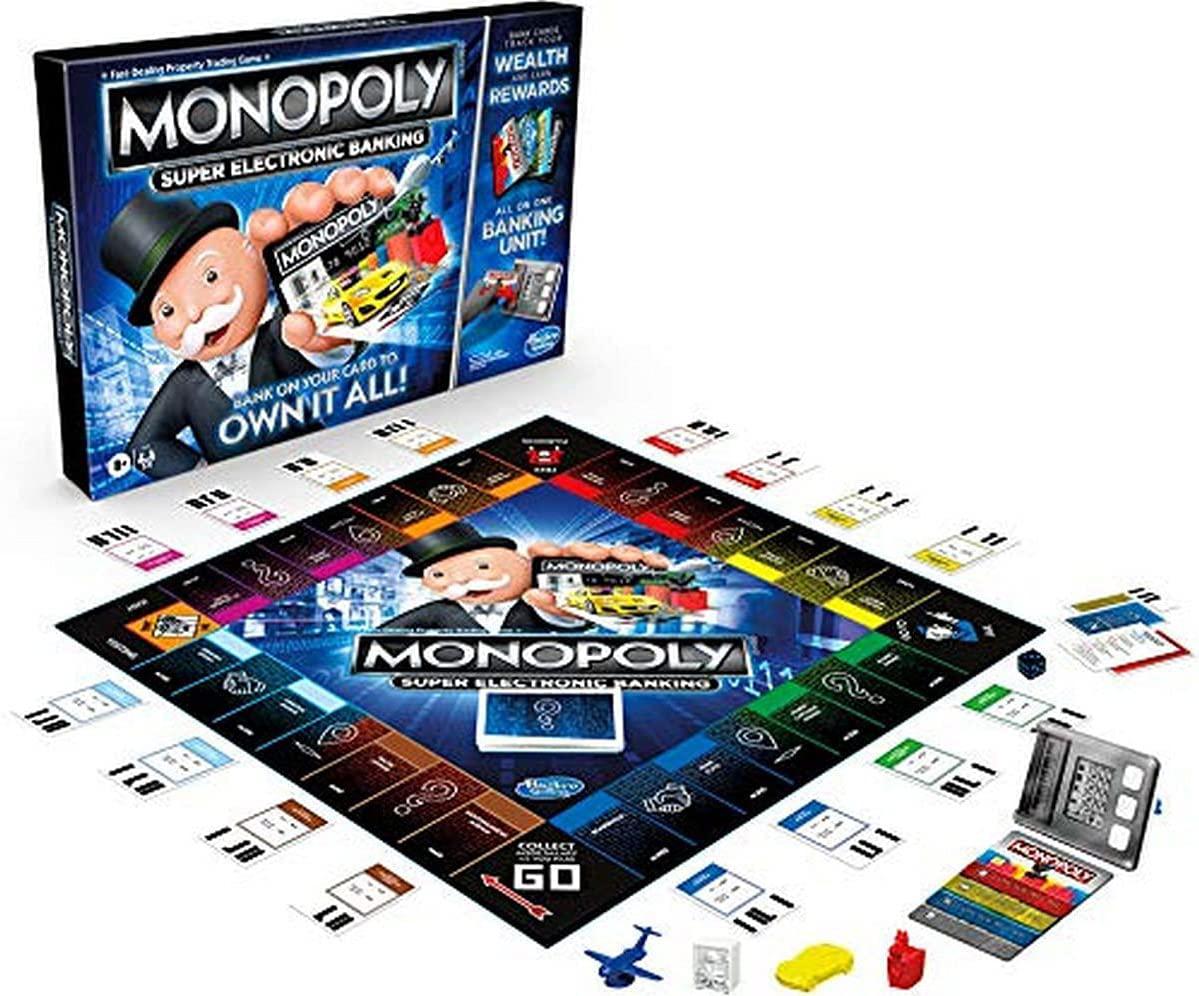 Monopoly has changed very little over the years. Sure, we’ve had versions of the game from all over the world, where the street names have been changed to reflect each particular edition’s point of origin – even some that have centred around fictitious places – but the basic rules of the game have always stayed the same. So what’s different about the ‘Electronic Banking’ version of the game that keeps it fresh and relevant in this modern age we’re living in? Well the biggest change, as you’ve probably guessed, comes in the fact that the game no longer comes with any Monopoly Money. Gone are the small, different coloured pieces of paper, to be replaced by a selection of different coloured credit cards, one for each of the players in the game. The other changes to the game bring the experience into the modern age a little more but are more aesthetic than gameplay-changing. Instead of the Dog, Iron, Battleship, Top Hat, Thimble, Boot and Sports Car pieces, you’re going to be playing with the Mobile Phone, Aeroplane, Burger, Formula 1 Car, In-line Skate and the Skateboard, all of which are slightly more modern. The amount of money that’s changing hands over the course of the game has also been modified. For example, instead of collecting £200 for passing ‘Go’, you’ll now collect £2 million. This change makes it feel like you’re actually spending some serious cash whereas, in actuality, you’re spending exactly the same amount of money as you always were, just multiplied by ten thousand.

The biggest selling point of the Electronic Banking edition of Monopoly is, of course, the ability to use credit cards with the game instead of passing actual pieces of Monopoly money around the game board. This could either be a good or a bad thing depending on the player. While playing the game, we found that we missed the money, we missed the tactile feedback of holding it in our hand and with only a credit card, whether you’ve got millions of pounds in the bank or are absolutely bankrupt, you’re still going to have that card in your hand, so there’s no way of actually feeling like you’re currently winning or losing the game – especially as most players will attempt to keep how much they’ve currently got a secret from the other players. The last thing you want is for one of the other players to buy a street that you want only to attempt to sell it to you for multiple millions more than the asking simply because they know how much money you’ve got in the bank.

While the addition of this electronic banking method is a definite novelty at the start of the game, after you’ve been playing for an hour or so the banker is going to get a little bit fed up of inserting credit cards into the device just because a player has passed ‘Go’ for the thousandth time. If you’ve got five or six people playing then it’s going to be even worse. In fact, if you’ve got a decent amount of people playing, then the banker is going to be inserting cards with enough regularity to almost warrant a separate player doing just the banking, without actually playing the game as well.

VERDICT: Monopoly: Electronic Banking is an interesting take on the traditional Monopoly game, and all of the gameplay mechanics are maintained quite well, so if you’re already familiar with the intricacies of the game, then you’re just going to need to look up how to work the electronic banker device and you’re going to be on your way to taking over the world before you know it. However, being the banker and using the electronic banker device gets pretty repetitive rather quickly, you’ll soon find yourself bored of entering and removing credit cards – and it certainly takes away from the enjoyment of the game on the whole. It’s a nice idea, and it brings a game that’s over a century old straight into the modern age, but it isn’t quite as painless as I would have hoped. It’s an interesting experiment though, and worth a game or two if you can get your hands on it – just don’t expect a revolution.

Liked it? Take a second to support GodisaGeek.com on Patreon!
Tags： how to play the game of life electronic banking
Latest： Why Experts Believed an Armed Conflict with Ukraine Would Never Happen
Next： What to know about non-fungible tokens (NFTs) — unique digital assets built on blockchain technology
Popular Articles/span>