Madden brings back colleges, but an NCAA video game remains a longshot

For all that has been written and said about video games, college athletes, lawsuits and the costs of settling them, the cameos of the Texas Longhorns and the Oregon Ducks in a video game — in an EA Sports video game — raised a lot of eyebrows a week ago.

The two universities appeared in the highlight reel for "Longshot," the story mode coming to Madden NFL 18. The protagonist, a sure-thing Texas quarterback who lost his way after graduation, apparently played a big game against the Pac-12’s glamour franchise. What became of that, who knows, but it appears that video gamers will, once again, be able to direct a college football team in action when Madden NFL 18 arrives at the end of August.

We are still a long way from the resumption of college football as any kind of simulation-quality video game. This is not a preamble or a trial balloon signaling future intent. Remember that NBA 2K16 offered players the choice of six universities in its story mode, too, and that was two years ago.

Yet it’s remarkable that Electronic Arts would bring back colleges, in any form, to one of its video games. It has long been expressed to me, very carefully of course, that any EA Sports developer talking on the record about college football is asking for his pink slip. The NCAA Football series, and its college basketball companion canceled in 2009, is popularly regarded as a florid exploitation of amateur athletes’ labor, even if Electronic Arts was following NCAA policy, even if it begged the NCAA to consider allowing college players to appear under their own names in a video game.

Mike Young, one of the writers on “Longshot,” demurred when I asked him two weeks ago if real colleges would appear in the story he and Adrian Todd Zuniga (a childhood friend, no less) had developed. It’s still a taboo subject. After the “Longshot” trailer premiered at EA Play a week ago, I sent several questions back to EA asking about the decision to include college teams and the effort to land them. They were answered not by Young but by Seann Graddy, the game’s executive producer.

“Authenticity was important to the story,” Graddy said, “so having a team Texas actually played during the year that our story is set in made sense.”

This is intriguing, as it dates the playing career of Devin Wade, the story mode protagonist. The last time Texas faced Oregon was the Alamo Bowl in 2013 — the year NCAA Football was cancelled. 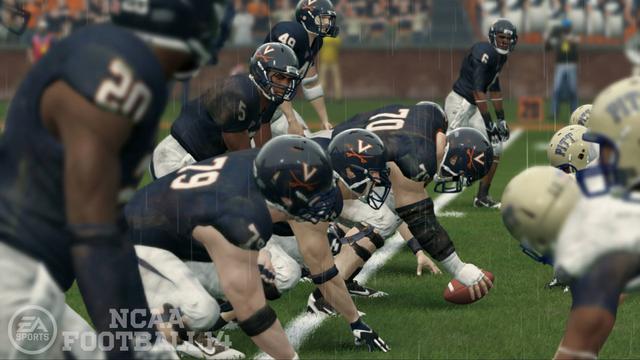 “Had the University of Texas not participated in the story we likely would have sought out another authentic Texas college football program,” Graddy said. Still, colleges were an ancillary layer to a story that is deliberately kept away from the NFL season. “Longshot” is about a fallen star earning his way back to the league.

“Devin’s high school career is even more central to the story we are telling, and the heart of high school football is in Texas,” Graddy said. “It made sense to have his career play out there both in high school and college.”

Why would Texas, one of the few college athletics programs that actually makes money, choose to participate? In the old days of NCAA Football, the top-flight football factories would get at most a $75,000 check for their appearance in the EA Sports series, peanuts to a big time school. Cutting an individual deal may have earned it a higher payday, but it’s doubtful that money really sealed the deal here, when you’re dealing with a university whose endowment keeps pace with the GDP of developed nations.

More likely, the chance to stand alone in a cinematic work, as opposed to being one of 128 schools in a video game widely seen as abusive of players’ rights, helped bring along the Longhorns’ athletic department. And the Ducks’, too. Remember that Animal House was filmed in Eugene, Ore., and the UO president at the time had been at California when it rejected requests for The Graduate to be filmed on the Berkeley campus. I also asked if EA Sports’ relationships with Nike, which has strong and visible ties to the Ducks’ athletics department, helped out there. “Nike did not play into our selections,” Graddy said.

Fair enough. It was still a considerable risk for Young and Zuniga to write a story depending on real world colleges, after what went down four years ago. “Had we not been able to work that out, a fictional school would have been considered,” Graddy said.

“Longshot” was going to go ahead with its story; the fact two big-time football schools bought into it, after all the unpleasantness and bad PR from the end of the NCAA Football series, is remarkable.

But it doesn’t mean NCAA Football is coming back any time soon.

Roster File is Polygon’s column on the intersection of sports and video games.

Tags： how to play taboo electronic game
Latest： The DeanBeat: The tragedy of the Star Wars: Battlefront II loot crates
Next： Banks closed 4,000 branches in 2021 as consumers turned to electronic banking
Popular Articles/span>