It was the last 15 minutes of a nine-hour sportfishing boat trip on Monday, March 7, when a fisherman aboard the Clemente dropped his line baited with live sardine in an area three miles off Camp Pendleton known as Box Canyon.

It wasn’t long until the bait was taken and whatever was hooked ran the fishing line to the bow and back trying to get loose, tangling up the lines of others aboard the boat.

“At first we thought it was a shark, the way it was fighting,” said Chase Moore, a boat captain for Dana Wharf Sportfishing and Whale Watching. “It was taking multiple runs and then we guessed it was a game fish.”

After a 15 minute battle, the fisherman, Jared Donahoe of Fullerton, reeled in the huge white seabass.

“That’s the one fish in our waters I’ve never been able to catch,” said Donahoe, 27, who first learned to fish with his grandfather aboard another Dana Wharf boat when he was 11. “It’s the one I was chasing all my life. It’s pretty crazy, I pulled out my dream fish.”

The 45-pound fish – a size rarely caught – is the first known, locally caught sea bass of the sportfishing season, which openedMarch 1.

No one was really expecting to catch a sea bass, Moore said. Typically, these fish are found in much shallower depths and often near squid nests in about 100 feet of water or outside kelp forests in 30 to 60 feet of water.

“We don’t target them at these depths,” Moore said, adding he thought the fish must have been following squid, which landed it outside its typical range.

The trip was a success for several of the anglers on board – a good omen for the season it appears. 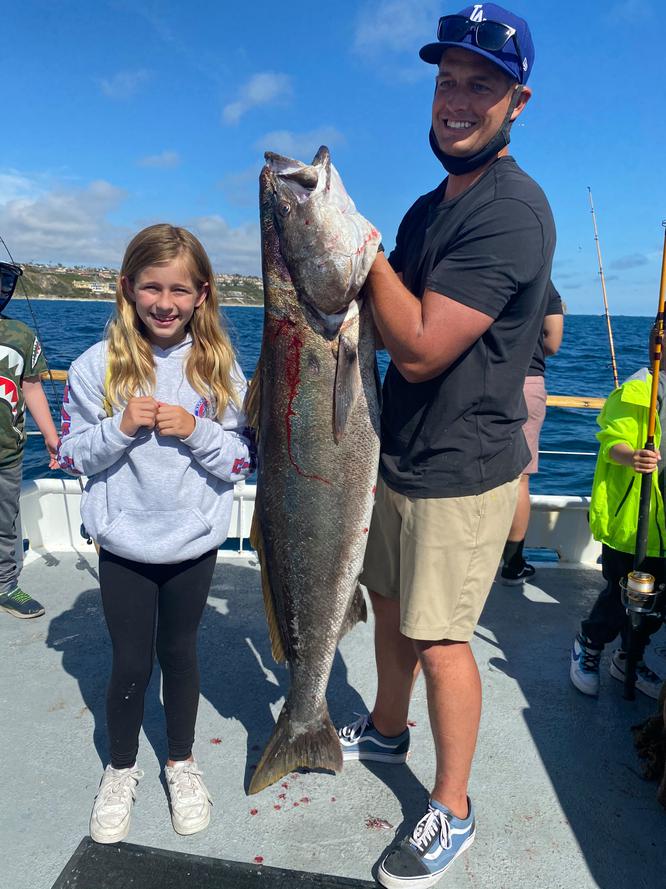 After the fish was landed, Donahoe, a baseball coach preparing for the fire academy, spread the wealth among the crew and the other anglers aboard the boat, letting each take home pounds of fillets. He also gave the jackpot prize – money collected by fishermen before the trip and given to the angler who gets the biggest fish – to the crew.

“I would have spent hundreds of dollars to go on a charter to catch a white sea bass,” he said. “So it’s the least I could do.”

The catch is also of interest to marine biologists at the Hubbs-SeaWorld Research Institute who are researching white seabass and trying to ensure the species’ survival.

Cultured young sea bass are spawned at the institute and then given to local fishing and conservation groups in Southern California to raise in seawater hatcheries. There are several in Orange County, including Dana Point Harbor, which has two hatchery pens at the Ocean Institute and one near the Orange County Sheriff’s Harbor Patrol station.

The program is a collaborative effort with the California Department of Fish and Wildlife to see how white seabass thrive in the wild.

When the fish are caught, anglers are asked to turn over the fish heads so they can be checked for a small metal implant in their cheek. The fish will have that implant if they are part of the Hubb-SeaWorld program and were raised in the hatchery. If they don’t, it is an indication they were born in the wild.

“This is part of the science,” said Wayne Kotow, executive director of Coastal Conservation Association California, a fishing advocacy group that helps raise money for the Hubbs-SeaWorld program. “The tags show when they’ve been released, how long they were out there and where they’ve gone.”

The white seabass appear to be doing well, he said. The program, one of the first in the nation, shows that they can be bred, released and thrive in the wild.

“If you look at the catch rates and what we’re seeing in the water, we’ve seen huge fish that have been out there for a long time,” Kotow said. “We have fish caught up in San Francisco and down the Baja coast. Getting the heads back is important, it’s part of seeing how effective the hatchery program has been.”

Many fishermen may not know that if the heads are surrendered with information for the angler, Hubbs-SeaWorld will send the prized stones — that help the fish balance and are used to determine its age— back to the fishermen. The bigger the head, the larger the calcium stone.

Donna Kalez, who operates Dana Wharf Sportfishing and Whale Watching, is also on the board of Coastal Conservation Association California. “I want to encourage people when they catch a legal sea bass (over 28 inches) to save the head and turn it into a landing like ours,” she said.

Tags： how do you turn off the electronic sport fishing game
Latest： Purchase a Fishing License
Next： On the trail: Don't wait around to try fly-fishing
Popular Articles/span>