""Engineer and video game developer Jerry Lawson, surrounded by early video equipment in his office, circa 1980. Strong Museum of Play

If you're an older gamer, then you've likely got fond memories of popping in a new cartridge before settling in for a rousing session of your favorite game, whether it was Super Mario or Sonic the Hedgehog — and you've got Gerald Lawson (also known as Jerry Lawson) to thank for that little cartridge.

"Jerry Lawson played a pivotal role in helping to lay the foundations for today's $150 billion video game industry," writes Jeremy Saucier in an email. Saucier is the assistant vice president for electronic games and interpretation at the Strong Museum of Play in Rochester, New York. Since 2013, the Strong's International Center for the History of Electronic Games has housed some of Lawson's personal papers and professional artifacts, some of which the museum displays in its eGameRevolution exhibit.

Benj Edwards also offers high praise for Lawson. Edwards is a journalist and the editor-in-chief of Vintage Computing and Gaming; Edwards interviewed Lawson in 2009 after stumbling across the engineer's image in a 1983 computer magazine.

"Jerry was a big name in Silicon Valley in the 1970s because people came to him for semiconductor chips from Fairchild. It's neat to know there was a Black man in that position at the time, and you know his story must have been amazing to get him there," writes Edwards in an email.

It All Started in Queens

And he did have an amazing story. According to Edwards' interview, Lawson was born in Queens, New York, in December 1940. He grew up with a fierce mother who ensured that her son received the best schooling possible, and a longshoreman father with an avid interest in science.

It was under these various influences that Lawson was able to cultivate his natural interest in engineering, tinkering with various electronics and even creating his own amateur radio station at the age of 13.

He studied at Queens College and City College of New York (CCNY), but Lawson's engineering skills were largely self-taught, and he made his way to California's burgeoning Silicon Valley.

He eventually landed in 1970 at Fairchild, a semiconductor company where he worked as a field engineer — one of the few Black men in the industry at the time. Lawson also interacted with other people who would later become even more influential in the technology industry, such as Steve Wozniak and Steve Jobs, in the Homebrew Computing Club.

But it was while working at Fairchild that he met engineer Allan "Al" Alcorn, the "father of Pong," as Lawson called him in a 2005 keynote event.

Alcorn designed and built the two-dimensional tennis game Pong as "employee No. 3" for Atari, Inc., a company started by Nolan Bushnell and Ted Dabney that quickly became a pioneer in arcade games and the home games industry. Released in 1972 as one of the first video games, Pong became a smash hit and catalyzed the commercial video game industry. Alcorn met Lawson while scouting for electronic parts for Pong.

""Lawson used the prototype yellow plastic Channel F cartridge to test some of the first cartridge-based games ever developed. Viewed alongside game development concepts and proposals for other Channel F titles and Fairchild’s release of Math Quiz 1 videocart, this cartridge provides insight into game development as a process from concept to final creation.Strong Museum of Play

"I had a question about a certain part that Fairchild made. They sent out a field engineer to explain how their parts worked, and that was Jerry Lawson. Jerry helped me out, and [we] became friends at that point," says Alcorn.

In a sense, Lawson and Alcorn were both friends and competitors in the same space, or "frenemies" as Alcorn pleasantly recalls with a laugh.

According to a story that he told at the keynote event, Lawson remembered hearing about a coin-operated Pong game being placed in a beer hall or pizza parlor in Sunnyvale, California, which local kids would shock with a wire, leading the game to drop all its coins for the children to steal. This coin-stealing helped inspire the engineering behind Lawson's own coin-operated video game, Demolition Derby, which possessed a "coin defeat" mode to prevent local kids from stealing coins from the game.

Although Alcorn doesn't recall this specific story, he does remember Lawson mysteriously retreating into his work before reemerging with the Fairchild Channel F.

"After working with me as a sales engineer for Fairchild, he disappeared, and the next thing I know, Fairchild's coming out with a home video game player," says Alcorn.

What really happened: Lawson's superiors at Fairchild got wind of his side work on games, and they decided to secretly enlist his skills for their semiconductor company, which wanted to get into the game industry.

"In early 1976, following Lawson's evaluation and recommendation, his employer, Fairchild, licensed prototype video game technology from Alpex Computer Corporation and tasked Lawson, one of the few Black engineers working in Silicon Valley at the time, with developing it into a commercial product," says Saucier. 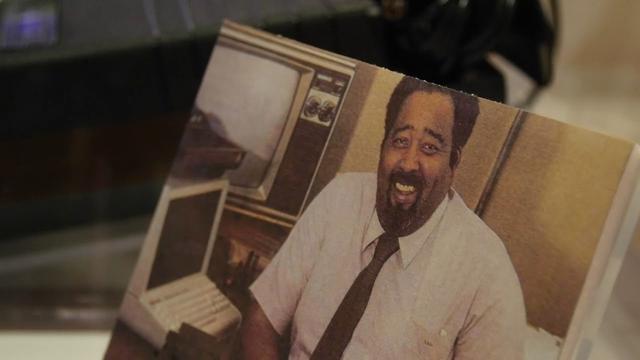 The company required Lawson and the other Fairchild team members to quickly develop a console using their specific F8 microprocessor. And not just any console — the first commercial cartridge-based home video game console: the Fairchild Channel F, which debuted at the Chicago Consumer Electronics Show in June 1976. Lawson particularly contributed to the project by developing a prototype for the console's controller, which enabled users to play games.

"Jerry Lawson didn't create the Channel F by himself, but he was instrumental in its creation," says Edwards. "He was a project leader of sorts, pulling it together and also championing its development. He was one of a team of engineers that designed it. He worked on the electronic circuit design and played a big part in the mechanics of the hand controller design."

Lawson was able to put his quick-thinking skills to use to bypass significant engineering problems in the creation of the Fairchild Channel F. In a public speaking engagement from 2005, Lawson recalls having an epiphany in the middle of the night about a radiation signal issue they were trying to fix. Lawson called his team member in the wee hours and they went back to the office, working on a calculation.

This calculation led to them shortening the length of the game controllers, which fixed the radiation signal issue and allowed them to bypass the Federal Communications Commission (FCC), which had been blocking the approval of their product. Lawson also was tenacious — he sat in the FCC's lobby for three days until someone finally gave him approval for his product.

"He was very practical at solving problems, and he impressed me. He was very smart," says Alcorn.

Although the Channel F garnered some interest when it launched on the consumer market in the fall of 1976, it wasn't exactly a smashing success, especially since the Atari Video Computer System (also known as the Atari 2600) console — developed by Alcorn and others at Atari — quickly dominated the industry when it hit shelves the following year.

Alcorn says that the lack of commercial success for the Fairchild Channel F was due more to the semiconductor company's inexperience with video games, whereas Atari's bread-and-butter was games, so they were better equipped to tackle the home games market.

But Alcorn offers nothing but praise for Lawson's work on the Fairchild Channel F.

"The Fairchild Channel F was designed the way you should design a video game," says Alcorn.

Saucier agrees, and describes the Fairchild Channel F's "innovative eight-way digital joystick" which "would get a second life when a third party manufacturer rereleased the joystick for Atari's console."

The game also introduced, for the first time, the 'pause' mechanism in the video game world, which any player will know is handy when you need to take a bathroom break.

"But its most significant achievement was its use of interchangeable cartridges, which proved revolutionary," says Saucier. "The potential of playing dozens, or even hundreds of individual games on a platform unlocked the possibility of selling tens of millions of games."

After leaving Fairchild, Lawson continued to work as an engineer, even working with Alcorn from time to time. Lawson also kept a steady hand in the changing video game industry.

Lawson Paid It Forward as a Mentor

Lawson also fostered support for the next generation of Black engineers. In his interview with Edwards, Lawson recalls a moving story in which a child recognized him on the Las Vegas Strip, shook his hand and thanked him.

"Jerry mentored engineering students at Stanford in his older age, even when he was in relatively poor health. I think that he wanted to inspire the next generation to be great engineers," says Edwards.

In the last decade, Lawson has received renewed attention due to Edwards, John Templeton and others who called attention to Lawson's seminal work. As a result, the International Game Developers Association (IGDA) honored Lawson in 2011 for his work in moving the game industry forward. And in 2019, Lawson posthumously received the ID@Xbox Gaming Heroes Award at the Game Developer's Choice Awards.

"Jerry Lawson was undoubtedly one of the influential forces within our industry from the time he developed Demolition Derby onward, including his leadership of the Fairchild Channel F's development," says Renee Gittins, executive director, IGDA, in an email statement.

Not long after the IGDA's honor, Lawson passed away in April 2011 at age 70 due to diabetes complications. However, his legacy lives in on in the memories of those who knew him — and in the thriving gaming industry.

"The invention of these cartridges influenced not only the console technology, but also the marketing, sales and breadth of video games made available. Without cartridges, the progress of the games industry would have been far slower and more limited. We are proud to recognize Jerry Lawson's accomplishments and influence, and it is uplifting that he remains an inspiration to this day," says Gittins.

Lawson also enlisted the help of his children, who served as some of the first unofficial video game testers in the industry, working to find the flaws or 'bugs' in his early games. They specifically tested a game called Maze, which served as Fairchild's predecessor to Pac-Man.

Tags： who knows math electronic quiz game
Latest： THE MAKERS OF THE PLANTERS® BRAND CREATE FIRST-EVER PERSONUTALITY QUIZ TO REVEAL WHAT YOUR NUTTY SNACKING HABITS SAY ABOUT YOU
Next： Dyscalculia: Know the Signs
Popular Articles/span>