The challenge for defining meteorological (Met) and groundwater (GW) droughts is topical research through the following approaches: (i) those based on drought indices, which refer to frequency analysis1,2,3; and (ii) those based on the balance equation4, which refers to the continuity equation alone. The first approach defines droughts as a deficit in water-related variables, such as precipitation or groundwater level (for wider definitions, see https://drought.unl.edu/Education/DroughtIn-depth/TypesofDrought.aspx), using Standard Precipitation Index (SPI)5 or Standard Groundwater Index (SGI)6 but these are not capable of studying the interactions between human activities and drought indices. The second approach is capable of studying such interactions (see7) by using the mass balance equation, but they include parameters that cannot be determined readily. These parameters (such as aquifer recharge and natural discharge) are inherently uncertain, and as such, balance equations are not capable of studying variations in drought within a basin without approximations. Thus, the second approach is avoided in this research investigation. Yet another technique is through trend analysis in timeseries, but their applications to the basin of Lake Urmia are not reviewed here as their defensibility depends on having long records of data, which is not the case here.

The modelling strategy is pivotal for the novelty of the paper in terms of discerning the causes for aquifer depletion with possible causes comprising climate change, Met droughts, lack of an effective planning system and mismanagement. The key issues in the data-driven modelling strategy, depicted in Fig. 1, are now highlighted, in which the term maximum events is pivotal. As detailed in due course, the available sparse data comprise the precipitation records at 48 synoptic stations and groundwater levels at 158 observation wells, each with its 21 years of recorded timeseries at monthly intervals. Notably, a statistical summary of the synoptic stations and observation wells are given in the Electronic Information Data. Following Step 3 for each of Met/GW droughts, SPI/SGI timeseries are generated for each station/well, which serve to generate two more timeseries of duration and severity at each station/well (Step 5). Each of the generated timeseries has a maximum value, which is extracted to form one more basin-wide timeseries for Met droughts and GW droughts (Step 5), and as such, the study forms 48 values for duration/severity for Met droughts and 158 values for GW droughts. The application of Steps 5 and 6 to these data renders return periods, which are distributed over the study area using a spatial interpolation technique. 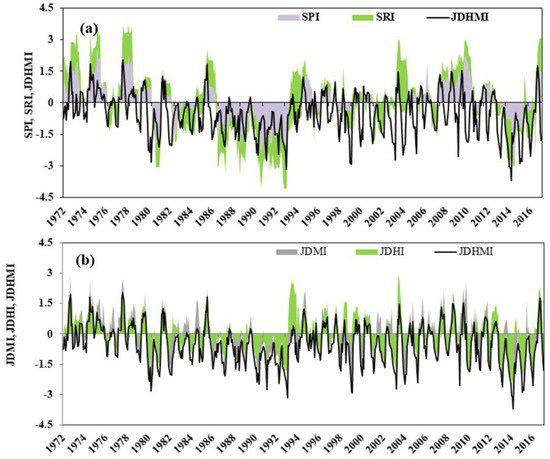 Met droughts are outcomes of natural processes but the role of carbon emission on Met droughts is global and not considered specifically here by the virtue of 21 years of data; whereas, GW droughts are impacted by both natural and anthropogenic factors. The impact of the Met drought on GW drought would take time, which should vary according to the capacity available in the aquifer but this is unknown for the aquifers in the study area. As the outcome of the modelling strategy is an emerging capability by putting Met droughts side-by-side of GW droughts, it becomes possible to ask the question that can interactions between Met/GW droughts be seen through data-driven modelling studies? To the best knowledge of the authors, there is no technique to investigate the questions, but the modelling strategy in Fig. 1 is a heuristic approach to discern anthropogenic impacts in terms of return periods. There is no precedence for the inter-comparison of Met/GW return periods, hence the learning from the results is ‘heuristic,’ as defined later.

Three techniques are used for the intercomparisons of the results: (i) visual comparisons; (ii) study relative differences between Met and GW return periods ((MetT-GWT)/GWT, where MetT denotes the return period of Met drought and GWT is that due to groundwater); and (iii) derive a ‘risk matrix’ for each aquifer depending on the mean of the return periods of Met/GW droughts. On a similar note, Ashraf et al. (2021) use the term ‘anthropogenic drought” as the ratio of anthropogenic withdrawal to the total outgoing flux using the balance equation4. Notably, heuristics refers to a clearly defined ‘scheme of doing things’ by any credible approach (further discussed by8).

The return periods are derived from bivariate distributions, which represent the mean time interval between drought events with the highest duration and severity observed in the recorded periods, where the term bivariate refers to duration and severity. The actual techniques are reviewed in due course but instead attention is drawn to delicate issues on drought studies that can be easily overlooked. By definition, a lower return period means a higher probability of occurrence. For floods, by definition, higher (or large) values of return periods stem from lower probability of occurrences, and this is generally understood to refer to adverse conditions; whereas, in drought studies, adverse conditions are captured by low values of return periods (higher frequencies and in plain language frequent droughts are adverse). Notably, drought studies set the condition to the event of the maximum conditions, as explained above. Thus, severe droughts are frequent droughts with maximum durations and maximum severities. Although SPI/SGI are derived individually at the synoptic stations and observation wells, the modelling strategy renders spatially-distributed return periods, which can be compared throughout the study area, and this serves as a heuristic basis for their inter-comparison. Comparing two stations with identical return periods does not mean identical drought events but it is the statement of the obvious that (i) Met droughts are unlikely to be impacted by GW droughts in the planning periods; (ii) GW droughts are likely to be impacted by mismanagement and by Met droughts.

Currently, Lake Urmia undergoes an unprecedented crisis as its water level has declined severely, most of which took place in the living memory during 2009–2016. The literature review on Lake Urmia is presented in the next section but its high-level summary is that it is an outcome of multiple factors including the absence a planning control system and mismanagement, lack of risk-based decision-making, anthropogenic and natural processes. The plethora of research outputs on the decline of lake water level (see the next section) is often focussed on climate change and/or drought but without a due regards to the absence of a planning system and mismanagement. Deriving return periods for Met and GW droughts provides the basis for a novel contribution by the paper, which uses the basin of Lake Urmia as the pilot study for the discernment of anthropogenic impacts on GW droughts. The discernment is facilitated by the modelling strategy in Fig. 1 and the emerging capability is novel and yet to become topical.