Using IBCS during the first flight test, the Army intercepted a high-performance, high-speed tactical ballistic missile (TBM) target, the company said. The system was aided by the defense giant’s Joint Tactical Ground Station, which supplies space-based sensor data to IBCS to provide an early warning of an incoming missile. IBCS then established a track ahead of ground-based sensors, “thus providing increased situational awareness for the operators,” a Northrop Grumman press release stated. 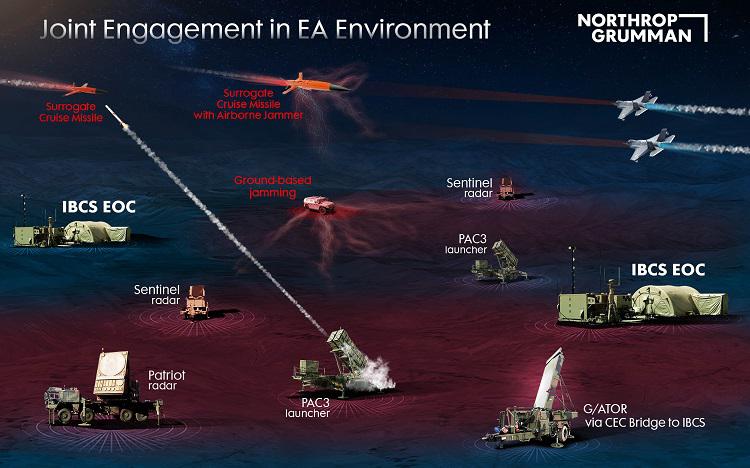 During the second test, IBCS was able to successfully defeat two cruise missile targets while under electronic attack. The press release said that the system was able to “maintain continuous track custody” of the incoming missiles by fusing together data from multiple sensors “degraded by electronic attack.”

That ability to successfully pass and fuse information from disparate platforms is at the core of what the US military is trying to achieve with Joint All-Domain Command and Control. IBCS is “a keystone” to all-domain operations, according to the service’s contract award last year.

“We continue to demonstrate our architecture’s power to leverage information from every domain, delivering unprecedented situational awareness and increased time and options to warfighters,” Christine Harbison, Northrop’s’ vice president and general manager for combat systems and mission readiness, said in a statement. “IBCS’s maturity and ability to connect legacy systems significantly helps to expand their mission capability.”

A spokesperson for Northrop Grumman said that a third flight test is scheduled for the fall. According to the Army’s announcement in December, the contractor is responsible for developing 160 systems, with a full-rate production decision slated for fiscal 2023. The program office responsible is PEO Missiles and Space.

At Project Convergence last year, the Army used IBCS to remotely track and “engage” targets, including the use of the F-35 to provide tracking data. During the Yuma, Ariz.-based event, IBCS participated in a “series of complex network and communications exercises,” that included precision strike and an integrated air and missile defense missions, the company said at the time.