'I was supposed to write music and die poor': How SF musicians are turning to video games to make ends meet

The hedge maze was an example of the unique functional challenges presented by music in games, which has in turn spawned a cottage industry of composers and sound designers hoping to find the professional musician’s holy grail: steady employment.

The SFSU course teaches young musicians about one of the most viable career paths in a profession that’s becoming less and less viable, especially in San Francisco. In a survey of 600 artists in general, the San Francisco Arts Commission found more than 70% had left SF or were about to be displaced. Data from the Bureau of Labor Statistics states that there are 830 professionals working in the Bay Area under the categories of music directors, composers, musicians and singers (that’s not counting teachers), with the mean income level at $75,080 — an impressive salary in some cities, but low enough to qualify for affordable housing in San Francisco.

Within the gaming world, salaries for musicians are substantially higher, with an average national salary of $88,140 based on a 2021 survey of industry professionals. That said, only 6 out of 10 people working in gaming audio are employed by companies, with many opting instead for freelance work. As gaming industry revenue surpassed $200 billion in 2021, with expectations to grow to $435 billion by 2028, according to one market research firm, it’s becoming one of the few revenue musical income streams on the rise. But even with college-level training, a job is far from guaranteed.

Like any profession, working in the gaming industry requires specific training, and several Bay Area operations have popped up to help gigging musicians learn how to take their skills from the stage to “The Sims.” San Francisco State University’s program might be the most notable, as professor Steve Horowitz literally wrote the book on the industry and he also runs an online school called the Game Audio Institute.

Horowitz stumbled into the industry almost by accident. Early in his career, he was just a bass player who loved Frank Zappa and ran a recording studio in Emeryville. Then a serendipitous conversation led him to the world of game audio.

“A friend of mine came to town and he was like, ‘Have you ever thought about making your living writing music for games?’ And I was like, ‘No, I went to CalArts,’” he said, describing his music degree. “I was supposed to write music and die poor,” Horowitz said.

Eventually, Horowitz landed a full-time job as the audio director for Nickelodeon, where he worked as the audio director on games related to iconic franchises like “SpongeBob SquarePants,” “Dora the Explorer” and “Star Trek,” and now has 1,000 titles to his name (as well as releasing albums of his own music).

Now he’s made it a mission to help foster the next generation of video game composers. In the class students flex their composition and production chops, using the school’s pro equipment to record string sections, but also learn proficiency in video game creation engines like Unity, as well as the nuts and bolts of navigating the industry.

Once you start noticing how big a part music plays in gaming (say for instance, you find yourself stuck in a hedge maze in front of a group of strangers), it’s hard to ignore. Now when Horowitz plays a game like the Western adventure game “Red Dead Redemption,” he walks into the saloon and spends more time studying the piano player than trying to find missions.

“If you stay long enough, one piece ends and another starts. You see the layers of adaptivity put into these games to make the game play experience and the sound match, and give you music as information inside the game.”

Recent Academy of Art University graduate Austin Smith, a 31-year-old who lives in the city, first fell in love with video game music via the “Final Fantasy” series.

“I grew up playing very beautiful experiences like ‘Final Fantasy XII.’ The music is just highly memorable and soulful. Those kinds of experiences stuck with me over the years, I would always go back and listen to that music,” he said. “This is legitimate music in these sort of silly-looking games. It’s a legitimate art form.” 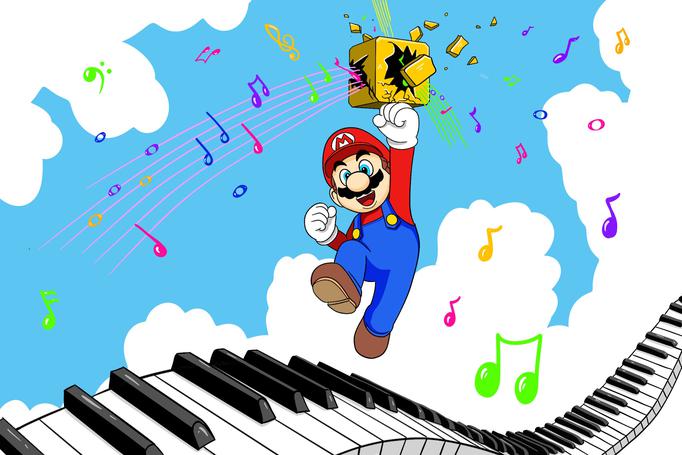 Until video game composers land a full-time position, journeymen like Smith typically begin their careers doing freelance work while juggling second jobs. One of Smith's biggest gigs came through Strawberry Hill Music. Based in Novato, the studio was hired for the desktop RPG “Initial 2,” and Smith served as lead sound designer on the project alongside three other employees. The team produced about 26 tracks and more than 400 other sound effects. He was paid $30 per hour for the work, taking in roughly $4,000 for the project over the course of a few months. The work moves much quicker than more traditional musical pursuits like writing and recording an album, which appeals to Smith.

“With a lot of music tasks, they’re high commitment, meaning you may work on an album for a year. With sound design, it’s more an iterative process,” he says. “Sure, you’re working on the same project for as long, but you’re moving onto the next thing in a day, not sitting with the same album for 8 months."

Another route for fledgling composers are “game jams,” where indie game developers spend anywhere from 24 hours to a month hacking away at creating demos.

“I build my portfolio and personal experiences through these game jams,” Roberts says. “The last one, I was the music lead for it. So I ended up writing a Gregorian-esque sort of chant for it, because it was a medieval apothecary simulator.”

When most musicians begin their journey playing an instrument, they usually have dreams of performing onstage in a band rather than scoring a game. But for Alex Heselton — an SF resident who has spent much of the pandemic in London — the goal was always to hear her music on a small screen, specifically in video games.

“All I ever wanted to do since I was a kid was video game audio. Most kids want to be astronauts, or a doctor,” she says. “It was video game music that got me into playing, it was always in the back of my mind that that was the path I was trying to do.”

Like Smith, Heselton took inspiration from hours playing “Final Fantasy IX” as a child. She left high school early to attend a music conservatory in the north of England and eventually made her way to the Bay Area, but the siren song of tech was hard to ignore. She did a coding boot camp but couldn’t forget her drive to succeed in the music industry.

“Usually once people get in tech, they stay there. But I just couldn’t not do music,” Heselton said.

She then enrolled in the video game audio program at San Francisco Conservatory of Music. Those courses, as well as local networking meet-ups and a mentor who advocated for more women in gaming, helped her return to music and enter the industry as an audio generalist at EA with a starting salary around $80,000. Her career trajectory eventually leads to the position of audio director, which can pay up to $200,000 per year. This niche intersection between the tech industry and creative class helps musicians not only survive in SF, but thrive.

“As much as you can hate the tech companies, there is that pathway for musicians where you can make a living doing audio, and that frees you up to do your own craft in your space time,” Heselton says. She notes that most of her co-workers play in bands in their free time, with several metalheads who’ve been on the team for over a decade.

Over time, Heselton began to specialize in recording and coaching voice actors. That concentration proved versatile enough to transcend gaming, bringing her to a short tenure at Google on the team that developed Google Assistant. However she once again was pulled back into gaming and rejoined EA, albeit working remotely from London due to the pandemic (she plans to move back in the next few months). While helping direct the voice actors on “The Sims” — a game she played for countless hours as a kid — Heselton developed a greater appreciation for how a video game can be just as personal and transformative a piece of art as an album.

“I realized how impactful a game it can be. It’s such a queer-friendly game, so many people get to live out their true lives through it and have come to realize that they’re queer,” Heselton says. “That kind of opened my eyes. I’m not doing rocket science, but in a small way hopefully I’m having some good impact on the world.”

- The history of the Bay Area's most notorious '90s rave warehouse