How To Play Taboo On Zoom At Your Next Virtual Party

As we make our way into yet another month of staying safely inside, finding ways to spice up our Zoom calls has never been more of a necessity. Rather than try to reinvent the party game wheel, why not harken back to the classic games you know and love like Taboo. Now, you may ask, “But how do you play Taboo on Zoom? It requires decks of cards and physical timers and a big button that releases a terrible ERRR sound!” And here is where I virtually pat you on the head and say, “Allow me to introduce you to... the Internet.”

If you aren’t familiar with the game or you were more of a Catchphrase family, Taboo is a word guessing game. You start by dividing your group into two teams. When it's your turn to give clues, you draw a card that has a word you want your teammates to guess. Below that word is a list of related words you aren’t allowed to say in order to give clues to your teammate. For example, if your word was “peanut butter,” some of your taboo words listed might be jelly, sandwich, and Jif. If you say any of those words during your turn, you get buzzed by a member of the opposing team who can also see the card, and you don’t get a point. Keep giving clues and having your team guess words until the timer runs out. You get a point for every word your team guesses correctly.

Here are four different ways to play Taboo on Zoom. You’ll need to establish your own buzzer for when a taboo word is said. I highly recommend this online air horn.

PlayTaboo.com has a simplified version of Taboo available for free online. You'll see a card with the secret word on top with five taboo words underneath it. When your teammates have guessed the secret word, just click "next" to generate a new card. 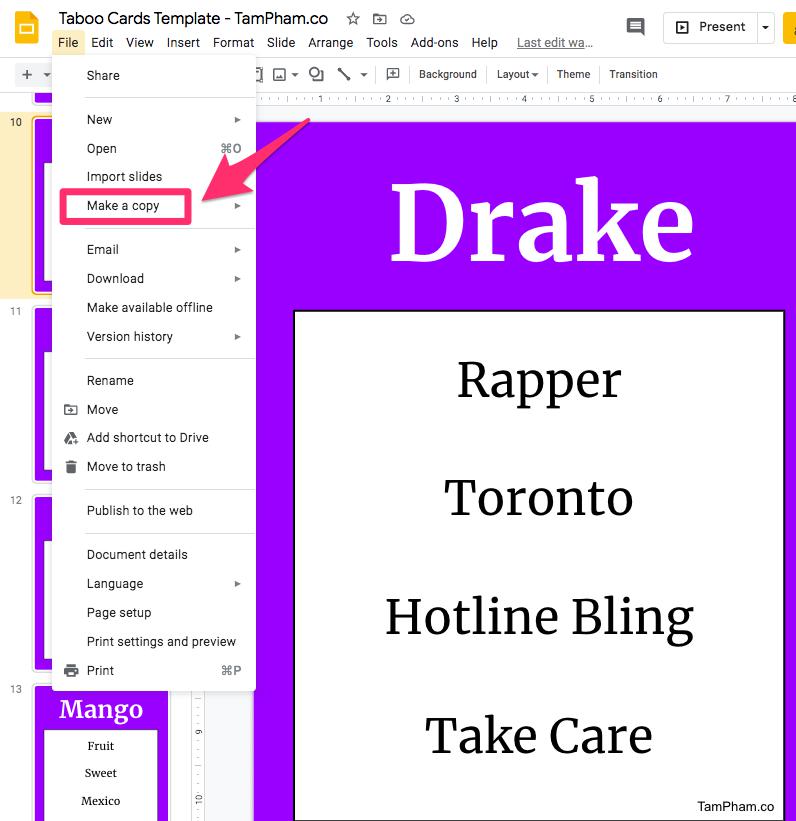 The caveat: You'll need someone to be diligent about keeping score since it doesn't do that for you. This version also works best if there are at least two people per household on the call so one person can keep tabs on the taboo words. Otherwise, you'll need to use the honor system.

A Version That Keeps Score For You

PlayTabooGame.com also autogenerates a secret word, as well as taboo words for you. For each card, you can press the button labeled "correctly" if your team gets the word. One point will be added to your total and a new card will be generated. You also have the option to pass using a button below the card — this doesn't impact your score, but you are only allotted three passes during your turn on this version of the game. Also, if you say a taboo word, you press the button labeled taboo. This will take away one point from your total before generating a new card.

The caveat: Like the above version above, there isn't an easy way for the other team to keep tabs on the taboo words so the person giving the clues will need to denote if they've said a taboo word.

Want to create a set of cards specific to your group? You can build your own deck of Taboo cards on Google slides using a template from the blog Tasty Cupcakes. One benefit to playing this way is you don't have to worry about screen sharing or using the honor system to keep tabs on taboo words. One player from each team just opens the Google Slides file with one giving clues and the other following along to keep track of any taboo words said.

The caveat: It's obviously much more time consuming to make your own game entirely. However, you can save some time and energy by using a list of Taboo cards available online.

There's a free app for a Taboo-like game called eTabu that allows you to play online with strangers or with friends. However, the "friends" version requires you to pass your phone around like you would with Heads Up. Essentially, the eTabu app is like giving all your friends their own deck of Taboo cards to play with so you don't have to worry about screen sharing or looking off the same document.

The caveat: Your free game options are pretty limited. You get one free starter pack of 300 words. Each additional pack costs $2.99.

If All Else Fails...

Catchphrase is essentially Taboo without the taboo words. So, it may scratch a similar itch as Taboo without the hassle of having to figure out how to monitor taboo words, whether you need to screen share, etc. You can play Catchphrase online courtesy of The Game Gal. Their version also allows you to pick between lists of easy, medium, or hard words. Again, it's not exactly Taboo, but using the hard pack of words will add a similar level of difficulty as Taboo would.