Can you find a forced win in the following position from the recent Tata Steel tournament?

Don't be upset if you couldn't find the solution. The strong Russian IM Polina Shuvalova missed it too. As a matter of fact, she even lost this game:

Now try to find a winning continuation in the following classical game:

I am pretty sure that all players rated above 1600 didn't have many problems with this puzzle. Now think about it: all you needed to sacrifice in the first puzzle was a rook, and yet it was an incredibly difficult puzzle to solve. Meanwhile, the second puzzle was a piece of cake for most of you, even though White needed to sacrifice much more there (a queen and a rook).

The explanation is very simple: we are all trained to sacrifice something with a check. There are literary thousands of combinations that follow the general pattern of sacrifice with a check, then a couple of more checks and a checkmate. Indeed, it is very intuitive, since when we deliver a check, we have a sense of control over the game and it already psychologically justifies a sacrifice. 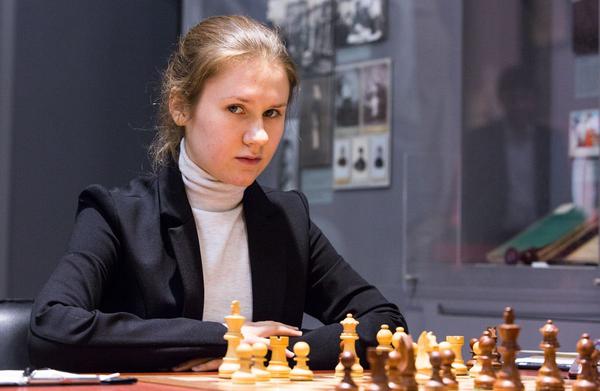 However, the first puzzle required a rook sacrifice when it is our opponent who delivers a check! For most human players that is already a signal to look for a different move; once we see that an opponent can capture the sacrificed piece AND deliver a check, we usually stop calculating. That's the main reason why such combinations are very difficult to find. Yet, when we manage to think outside of the box, the resulting combinations are usually exquisite. Who will forget the following insane king move by GM Denis Khismatullin?

Most of us wouldn't seriously analyze the move 44.Kg1!! even if we noticed the idea, thinking, "No, it cannot work." And that's the main difference between humans and computers. Computers, by definition, analyze all legal moves and therefore they simply cannot possibly miss such an idea. Meanwhile, we all have our biases which sometimes prevent us from seriously analyzing a move, even if it looks quite promising.

Here is one more big miss from Tata Steel tournament. Can you find the best way to continue White's attack in the following position?

It is obviously beyond human abilities to find the whole sequence of moves that leads to a win, so I cannot blame GM Jorden van Foreest for missing it. He still was able to finish the game in style with a beautiful combination:

Now I want you to notice something very important. Even though in both games players missed the best continuation suggested by a computer, they actually executed the exact same idea later in the game! IM Shuvalova missed the rook sacrifice on move 20, but she played 24.g4 offering the same sacrifice with a check four moves later. Van Foreest didn't play 15. Rxf6 only to play exactly the same sacrifice one move later. It clearly proves the fact that the players didn't just miss the golden opportunity, they just dismissed it due to psychological elements.

Shuvalova finally decided to sacrifice the rook only when her position became desperate and she basically had nothing to lose anymore. Unfortunately, in that situation her opponent didn't have to accept the sacrifice (which would again lose the game for Black). Instead he calmly consolidated the position and converted his material advantage. Van Foreest passed the sacrifice the first time because it looked like too much to give up the whole rook. Indeed, his position looked very promising, why take extra risk? On the very next move though, he sacrificed just an exchange (not the whole rook!) and comfortably won the game.

I hope that these examples prove that in many cases we see the best 'computer' moves but dismiss them due to our biases and other psychological problems. In order to play like a computer you should leave your emotions and biases aside and just keep calculating until you come to a clear conclusion. To be fair, even this approach is not a guarantee that you'll find the winning line if it involves many "computer " moves. In this case you need to use the only advantage that we have over computers: our intuition. After all, this is exactly how GM Mikhail Tal became world champion!

So, if a sacrifice looks very tempting and really screaming to be played, don't dismiss it just because it looks too risky, or it doesn't fit the typical pattern. Calculate it to your best ability and if you cannot find a refutation then just do it! Even if it turns out to be a mistake, at the very least you'll enjoy the game more this way. Isn't it the reason why we all play chess in the first place?

Can you put these tips to the test? Try them today in our Players League!