With the Formula 1 season now in full swing, it's around this time of year that the latest associated video game reveal becomes a highly anticipated inevitability. 2022 is no exception.

Having been hands-on with the work in progress PC-build version of the now entitled EA SPORTS F1 22 we can safely say this: It’s another Formula 1 game that is fun to drive, rewarding and, perhaps at this stage, a little all-too-familiar.

To be clear, we were able to drive all current 2022 cars within Grand Prix and Time Trial modes. The tracks on offer included the all-new Miami International Autodrome, plus Imola, Silverstone, Circuit of the Americas and the Red Bull Ring.

Here are the most significant changes to the F1 gaming series this year, and an update on their development progress so far.

Sprints were a glaring omission from the F1 2021 game last season, not appearing even as a post-release update.

That's changed, thankfully, for F1 22 and they arrive as part of three new weekend structure options: standard, authentic and 'sprint and race'.

The number of laps within a sprint is determined by how long you set the main race to be. For example, choosing a short race will only require five laps in a sprint.

Since Adam Rhys Dee voiced your race engineer – first in F1 2010 and then as the perfunctory Jeff in F1 2015 onwards – we’ve all been screaming at him to leave us alone because we know what to do.

With F1 22 however, the original voice artist has been replaced by Marc “Elvis” Priestley, an ex-Formula 1 mechanic who worked with McLaren from 1999 to 2009 and wrote The Mechanic.

The delivered lines are similar to the previous years, but we noticed several new quips and the new tones are refreshing after so many years.

You can change the punditry

Speaking of voice talent, a very small – but welcome – update is the ability to change between your preferred commentators.

English-language players can swap between Sky’s David Croft and Channel 4’s Alex Jacques to suit your personal preference, both still sitting alongside Anthony Davidson. Natalie Pinkham will also be part of the roster.

Choosing French, however, will see Jacques Villeneuve and Jean-Eric Vergne as your pundits with Sascha Roos for those in Germany. 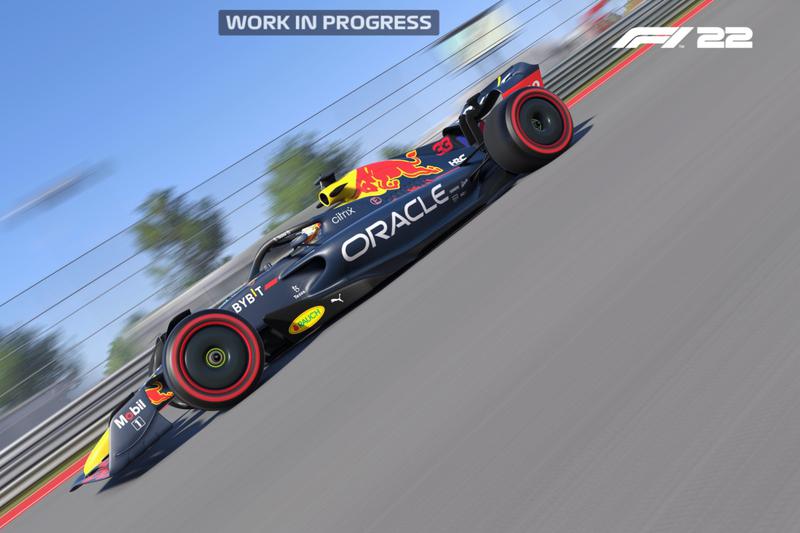 It's in virtual reality for the first time

If you are in the fortunate position of owning both a powerful gaming PC and a VR headset, then this will be the very first official F1 game to feature the technology.

Handily, it works across both HTC Vive and Oculus devices in our testing and even better, across any game mode. If you’re the sort of masochist that would like to take part in a full-length online race around a wet Monaco in VR, you can. Likewise, the My Team and Driver Career modes.

In practice, using the cockpit camera exclusively, it adds a level of immersion that has been lacking to date. Paired with a sim racing cockpit and the Fanatec Gran Turismo DD Pro wheel base, just driving laps on your own is the most intense an F1 game has been, ever.

But, of course, such a set-up remains for the privileged few.

“It’s a discussion. As I’ve said over the years with VR, there’s nothing ever off the table,” explained Senior Creative Director Lee Mather when quizzed about the potential for PlayStation VR2 support later in the year.

Perhaps the most notable change in an F1 game for some time, there is said to be a new tyre model, combined with the altered aerodynamic properties of the latest ruleset. Both impact the way the game telegraphs your driving inputs.

The sensation is of corner entry understeer, like all recent siblings, but, upon corner exit, you now must pay closer attention to your throttle inputs.

Turn 3 at Miami, for example, is without a throttle lift, but the first few times your try without the perfect line you can end up spinning under power, even with some traction control providing a helping hand.

From the mid-corner point onwards, oversteer is more prevalent – but not in an unruly sense. Far from a night and day difference, but it requires acclimatisation when compared to contemporaries.

Should you partake in the optional formation lap, not only must you work hard to increase your brake and tyre temperatures, but line up in your starting box correctly. Failure to do so and the game will force you to start behind the line, out of position, losing you precious centimetres.

Through this new 'immersive' formation option, you can also slightly angle your car to the left or right - a genuinely authentic feature.

Less real, however, is an option pitlane feature. As you approach your team, if you hit one button at the right time, your entrance will be along the ideal trajectory and your stop rapid. But, this is a far cry from being able to have an influence the steering yourself.

When playing the My Team or Driver Career team management modes, however, if you invest in pitcrew training, they will be able to pull off swifter stops compared to your rivals.

You can now drive supercars

Formula 3 or W Series are absent once more – when something like MotoGP 22 manages to include the top class plus Moto2 and Moto3 plus historical content –but you can now drive a McLaren road car. Yay?

In truth, this seems like a frippery, but it does tie in with the Pirelli Hot Laps or media tours that happen during race weekends, and we're told that these will be integrated into the main career modes in a similar fashion.

They will also form part of F1 Life, a new addition that will allow players to customise their character in branded apparel, showcase a shiny road car and ogle their trophies. If it all sounds a bit vacuous, that's because it is.

Pre-ordering consumers of the premium Champions Edition can also drive both the Mercedes-AMG and Aston Martin safety cars too.

One of the confusing elements of the reveal communications was a lack of cross-platform multiplayer, despite publisher Electronic Arts recently releasing the racing game GRID Legends with such a feature.

Thankfully, this has been confirmed for F1 22 via a post-release update. It will mean that those on PlayStation can race with people on PC and Xbox online.

It's still an F1 game

Any updates to the Jeddah Corniche Circuit venue to match the 2022 season are yet to be confirmed.

The 2022 Formula 2 season will also be present, but much like the recent F1 games, it arrives as a free update post-launch.

There could also be further tracks arriving too. According to Mather, when pushed for further details:

“[That’s] something I can’t really speak about at the moment, but something we’ll definitely go into a little more detail about once the game is out and about.”

With further additions on the horizon for the full release in July 2022, we are excited to see how this game plays out, bearing in mind that this is based upon the same game and graphics engine of the recent titles.

On track, the revised handling is refreshing, and the VR adds renewed energy. But, so far, it’s also another yearly F1 game. A lack of revolution may push the disenfranchised sim racer further away, but the new and expanded F1 audience will have a feature-packed game that so far successfully delivers the championship’s glamour.