How Does Screen Time Affect Your Brain, Anxiety & Overall Health?

The effects on your brain are both behavioral and structural. 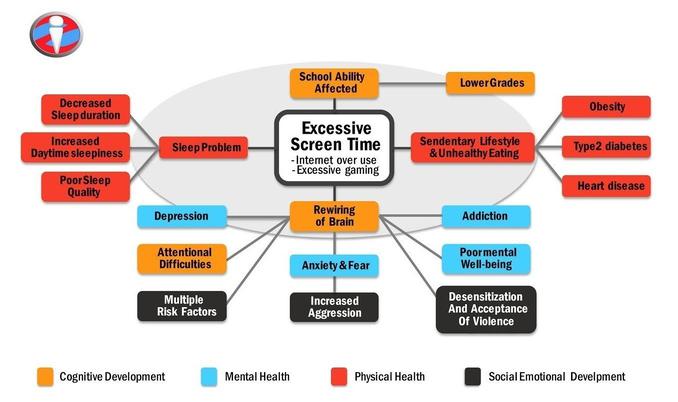 First, smartphone addiction is real. A study of students in 10 countries showed the majority feel acute distress if they have to go without their phones for 24 hours. Meanwhile, most people are checking their phones at least 150 times a day and sending upward of 100-plus texts.

This problematic use of cellphones has been associated with anxiety, stress, and even depression. These habits are causing what top neuroscientists have called "digital dementia," harming important right-brain functions including short-term memory, attention, and concentration in ways that may or may not be reversible.

On the structural side, individuals who are perceived as having an online game addiction show significant gray matter atrophy in various areas of the brain (right orbitofrontal cortex, bilateral insula, and right supplementary motor area) once examined on brain MRI studies. These affected areas where volume loss is seen are responsible for critical cognitive functions such as planning, prioritizing, organizing, impulse control, and reward pathways. These areas are also specifically involved in our development of empathy and compassion as well as translation of physical signals into emotion.

Additionally, kids are at risk, too. Findings from an ongoing NIH study on 9- and 10-year-olds show that those who use smartphones, tablets, and video games more than seven hours a day are more likely to have premature thinning of the cortex—the outermost layer of the brain where most information processing occurs. At this point, researchers aren't sure if that's a bad thing and won't know exactly what it means until they follow these children over time. However, the study also found that kids who had more than two hours of screen time per day scored lower on thinking and language tests.

Tags： don t lose your cool game electronic adult party game
Latest： The best Apple TV games you need to play
Next： Bronies explained: The grown men who love 'My Little Pony' aren't who you think they are
Popular Articles/span>