Hasbro is bringing a voice-activated version of their legendary Monopoly game to the market starting July 1. There is a large plastic top hat in the middle of the board that serves as an electronic bank and the banker, Mr. Monopoly, is activated by voice command after players press a button on the top hat. Each game comes with a list of voice commands to reference, like “balance” or “get out of jail.” Players still move pieces across the board, but Mr. Monopoly handles all money and property transactions so paper money and bank cards are no longer necessary.

No paper cash makes cheating impossible. This is the third cashless Monopoly game Hasbro has released, but the first to be cashless and voice activated. The game description states, “The iconic Monopoly top hat is voice-activated and the personality of Mr. Monopoly really shines as he handles all of the transactions.”

Monopoly, “The Fast Dealing Property Trading Game,” was introduced in 1935 and has released many versions within the U.S. and U.K. since. This is the first edition to require (AA) batteries. Hasbro claims that voice banking results in faster gameplay. 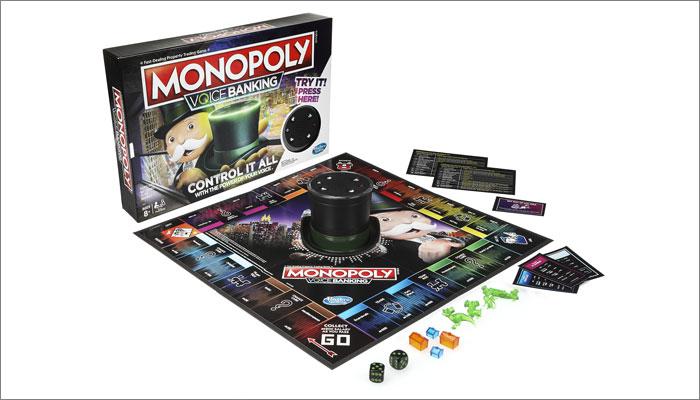 Will Voice Remove the Fun and Nostalgia?

Getting accustomed to the new edition may take time for consumers and longtime players. Some people enjoy the monitoring of the banker and tracking of their own money. But, there are many more changes than just an AI banker.

The original Monopoly allows for two to six players, while the Voice Banking version accommodates up to four players. The only characters available are a T. Rex, cat, dog or race car and all characters are wearing top hats. Jen Boswinkel, Senior Director of Global Brand Strategy and Marketing for Monopoly told INSIDER that having four “tokens” was purposeful. “We knew we wanted to use an interface where Mr. Monopoly knew which player was talking, which is why each player has their own button on the Top Hat. Six players would have made the experience too crowded.”

For players who strategically purchase the utilities and railroad spaces, those are no longer for sale and those who land there will be redirected to another property. There are also six fewer Avenue properties for sale (no Connective, Virginia, Tennessee, Illinois, Atlantic, or Pacific) and no Community Chest.

Without having money in front of them, players must keep track of their balances in their heads or write it down. Checking a balance, or determining who is in the lead, requires an extra step and request from Mr. Monopoly. “Without the stack of money in front of them, even the best of Monopoly players will need to find new ways to strategize to own it all and win the game,” Boswinkel told INSIDER.

Those who have played Monopoly for decades now must relearn the rules if they want to play in the digital age. PwC reported last year that younger consumers are adopting voice technology faster than their elders, so Voice Banking might serve as a way to get kids interested in a classic game. All Monopoly games remain playable for ages eight and older.

Amazon Puts up €50,000 for Alexa Skills Challenge for Games in Europe