(Pocket-lint) - The combat system in Wizards Unite isn't entirely easy to understand when you first start playing the game - it's not as simple as, say, throwing a poke ball.

So here's a quick guide to the combat system in Wizards Unite to help you get playing.

Where do battles take place?

There are two places where you'll really be drawn into combat - either battling confoundables (that's anything from creatures to dark magic that have captured a foundable) or when you enter a fortress.

The fortresses are the main arenas, set-up for a number of battles, supporting multiple enemy and letting multiple players join the fight.

What do you need to cast a spell?

To cast spells you'll need spell energy. How do you get more spell energy? This is collected from inns and to start with you can only have a maximum of 75 units. It's topped up through the food or drink you get at inns, with some things (like fish and chips) giving you a bigger boost than other items on the menu. If you want to increase your maximum, you'll need to use gold to upgrade your capacity.

When you cast a spell you use spell energy, so you can see that this energy is critical to battles - if you don't have enough at the start of the fight, you'll reach a point where you can't continue to cast spells and you lose.

You can exchange gold coins for spell energy if you don't have any, but it's better to go out somewhere where there are a lot of inns instead - like a town centre.

How do you cast spells and battle?

When you're facing something that needs a spell, you enter an animated sequence. You don't get to choose which spell to cast, it's a slightly on-rails experience where you're guided to cast the appropriate spell for the situation.

There are slightly different processes for fortress battles and confoundables, so we'll start with confoundables. 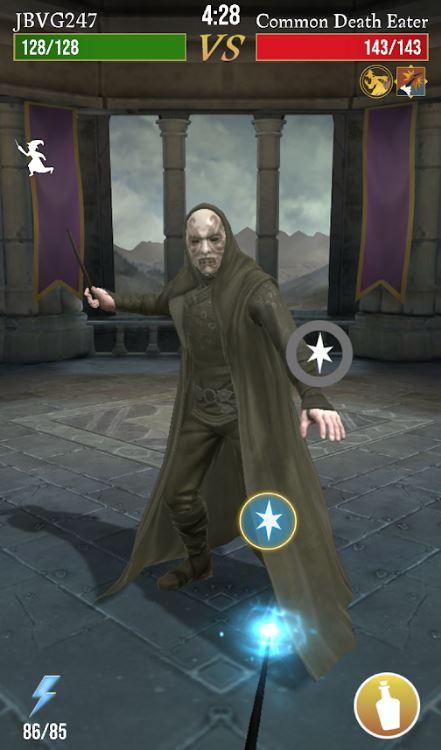 To cast the spell to combat the confoundable (thereby releasing the foundable) you first need to find it.

If you're using AR:

Move the phone to locate the confoundable, you'll see an align icon.Tap when they are aligned, it turns blue.That locks the target in place and you no longer need to have your phone pointing at it - you can just return your phone to a comfortable position.

If you've turned off AR, the confoundable just appears on your screen.

After that the process is the same:

You'll see a pattern on the display which you need to trace with your finger to cast the spell.Stay within the lines and complete the pattern.An accurate trace is a strong spell, an inaccurate trace is weaker.If the spell is strong enough, you defeat the confoundable and win.If the spell isn't strong enough, you can try again, or the confoundable will disappear after a few attempts.

In most cases when out exploring and collecting, that's all there is to it.

Fortresses are a concentration of dark forces and it's here you'll do most of the battling against creatures, death eaters or whoever - wizarding challenges. While you might encounter the occasional werewolf roaming the streets, most of the time it's going be in the fortress where you're casting fighting spells.

Once you've entered the fortress you get to choose a level of battle to take on. You have to start at the easy levels to unlock the higher, with increasing demands.

Once you have arrived at a fortress, you can select chamber you want to battle in. You then pick a rune. The rune (which you'll collect from treasure chests) will determine the rewards you get if you're victorious. You then enter the chamber and you can select an enemy to battle.

Once you're facing that opponent, this is how you fight:

Use your finger to drag the indicator on the display over the target on the enemy, which looks like a star. You have a limited time to do this, but once one is on top of the other, you'll see the blue circle appear. This is the most confusing part to figure out in your first battle.You'll then see the trace for your spell appear, which you trace with your finger.The spell is cast and damage will come off your opponent's power meter.The opponent will then retaliate and you have the chance to defend yourself by swiping in the direction of the arrow on the screen - failure to do this means you'll take more damage.You'll then repeat the process from step one to cast another spell until the battle concludes.

In some cases, a weak enemy won't cast a spell back, so you won't have to defend. If you fail to cast your spell properly or don't do it quickly enough, your enemy will keep attacking.

With more advanced enemies, the target area you need to align with is smaller, or moves more frequently, so is harder to lock on to, meaning you might miss the chance to cast your spell and you'll have to defend again.

Using potions to boost your battles

Some opponents are tough to beat and sometimes you'll take a lot of damage in the process of fighting a number of opponents. In these cases, potions can help you out.

There are many different types of potions. Some you'll be rewarded for levelling up, some you'll create yourself from collected ingredients - you can find them all in your Registry or down in the bottom right-hand corner during a battle.

You can tap on the potion to see what it will do - for example boost your attacks for three spells. If you're struggling to inflict damage, these are worth using.

The healing potion, for example, will restore 35 per cent of your health, while the exstimulo potion increases your spell casting power.

Tags： how to do game news cast
Latest： Sandra Oh's The Chair Netflix Show News, Cast, How to Watch
Next： How To Get Into Playing Video Games - Kotaku
Popular Articles/span>