gamerant.com The Story of Van Tran - The Woman Who Made the First Video Game with a Female Protagonist

Today, there are plenty of video games that feature great female protagonists — from newer titles, like Horizon: Forbidden West to more long-standing franchises, like Tomb Raider. These, however, are far from the oldest female-led games. That title arguably belongs to Wabbit, by now defunct video game company, Apollo. It’s touted as the first video game to have a named, playable female character.

Wabbit, in itself, is an important fragment of video game history. The Atari 2600 title is not only celebrated today for its female protagonist, but it also garnered plenty of praise then for its impressive graphics. That said, Wabbit has an underlying story that’s even more intriguing — one that’s over a decade in the making.

RELATED: Is PS Plus Extra Worth the Price?

The Search for ‘Ban Tran’

For years, people searched for Wabbit’s elusive designer — a Vietnamese woman named “Ban Tran.” After releasing Wabbit in 1982, she seemingly disappeared from the video game scene without a trace. Thus, video game historians and enthusiasts got to work.

The search was first undertaken by two people: Kevin Bunch of the Atari Archive, and Kate Willaert of A Critical Hit! They had their work cut out for them as “Ban Tran” was a common name among Vietnamese women. Bunch sent out dozens of letters in 2019, all addressed to the same name. Meanwhile, Willaert reached out to Ban Tran’s former colleagues in Apollo, as well as the subsequently formed MicroGraphic Image. Unfortunately, the "Ban Tran" they were looking for never responded. 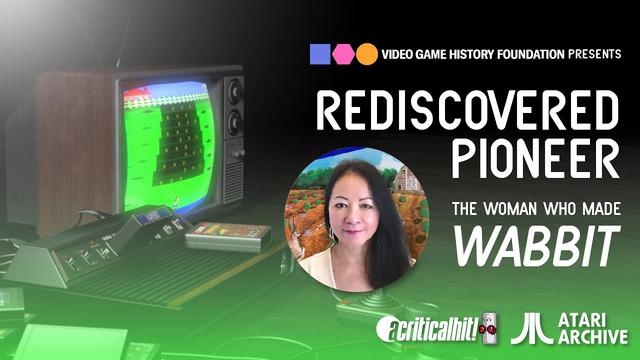 Willaert also documented the duo’s findings on Twitter in 2021, tapping into their community in an attempt to learn more. Eventually, the Video Game History Foundation pitched in to help. The organization opened a Discord channel dedicated to finding Ban Tran, calling on their community to assist in the search.

Finally, they had a breakthrough. Apollo — Ban Tran’s former company and the publisher of Wabbit — had filed for bankruptcy in 1982, likely due in part to the video game crash of 1983. As such, the group searched for Ban Tran in the old Texas bankruptcy records. There, they found lists of former employees, including a “Van Tran” — the woman they were looking for. With this information, the group was finally able to get in contact with Van Tran, who had since gotten married and now used the name “Van Mai.”

Showcasing Wabbit and Its Creator

Bunch, Willaert, and the Video Game History Foundation have since released a video documenting their search, as well as an interview with Mai. She had moved to the United States as a refugee during the end of the Vietnam War. Having settled in Texas, she then got into computer programming and eventually applied for a position in the video game company, Games by Apollo Inc.

Dan Oliver, a former developer at Apollo, noted in an old forum post that Mai wasn’t the type of person he’d expected to apply at Apollo — “not a nerd in any sense of the word.” Though Mai, indeed, didn’t have any experience making video games, she quickly set herself apart from the other applicants when she was told to think of a concept for a video game on the spot. While the specifics of her idea have been lost to time, Oliver recounts that it was “extremely intense,” certainly too intense for the Atari VCS. He also said that it made Night Trap — a well-known horror game from the 1990s — appear like a kids’ bedtime story.

Suffice to say, the preconceptions surrounding Mai began to crumble, and she got the job. Later, she’d pitch the idea of an Atari game for girls — what would later become Wabbit. Wabbit centered around a little girl named Billie Sue, who wanted to protect her vegetable garden from hungry rabbits. It was an impressive game, most notably for its intricate details and colors, considering the limitations of consoles at the time.

After Wabbit, Mai started to work on another game for Apollo. Unfortunately, this was cut short when the company filed for bankruptcy. Mai then joined MicroGraphic Image, a newly opened video company formed by former Apollo employees. She was tasked with making an Atari 5200 port (admittedly, one of the more obscure game consoles) for the arcade game Solar Fox. However, she left the company soon after, and the port was never finished. Mai then went on to complete a degree in computer science. Though she currently isn’t working in the video game industry, she looks back on her time as a game designer fondly.

In the past, the video gaming industry was most commonly regarded as a space for males — both in terms of its providers and consumers. Van Mai’s contribution to video gaming history proves that this is not at all the case. Mai was a female game designer who sought to create a video game for young girls. Clearly, then, there are women in gaming history, which makes it all the more important to write about them today.

The belief that video games are made solely by and for men is harmful to the industry as a whole. It bars women from entering the gaming industry, while also contributing to stereotyped portrayals of females in video games. Thus, uncovering video game history and the women who contributed to it is an excellent way of dismissing such unfounded notions. Moreover, it empowers females in the gaming sphere, showing them that they do belong in the field.

While the gaming scene is still primarily dominated by males, it’s made leaps and bounds towards being more inclusive of women. More women are working in the industry and, as stated earlier, even more games feature female protagonists — a development no doubt pioneered by Van Mai and Wabbit. Most notably, female gamers are on the rise, revealing that the notions of a male-only field were all but fictitious. Granted, there’s still a long way to go before the video game industry is truly inclusive of women, but this is certainly a start.

Freelance writer who enjoys overanalyzing games. If she's not gaming, she's probably tending to her drama queen of a dog.