In its penultimate season 3 episode, Atlanta takes yet another detour to continue challenging the very notion of Blackness, while still finding room to talk about reverse racism and colorism. The result is ultimately the type of dark comedy that's hard to look away from but does pose the question of just how many entries of this kind season 4 will have.

“Rich wigga, poor wigga” is written and directed by Donald Glover and the entire script unarguably fits in with the tone and themes Atlanta has been pursuing this entire season, whether that happens to be in Europe or in American soil. This time around though, Glover takes more of an arthouse approach than he ever has before, and it's not just about the entire thing being filmed in black and white as every choice in terms of music, shots, composition and its protagonist evoke that same feeling.

Atlanta goes colorblind only to highlight the irony that such a thing can never really exist, even when accounting for one’s best of intentions, which is what makes Aaron such a great, albeit misguided main character. The first scene is meant to unsettle viewers, the blatantly white and Logan Paul fan Aaron is playing video games and starts trash-talking other players, things escalate a bit and he uses the n-word to taunt his opponents, he gets a message from his girlfriend regarding college admissions: she got in, he seems stressed.

Once the main title rolls in, the episode reveals its true cards, Aaron is a biracial kid, his dad is Black and though it’s clear he’s explained what it means to be Black in the United States to his son, he doesn’t want his son hanging out in the wrong place or with the wrong people at the wrong time. That doesn't matter, the main thing on Aaron’s mind is finding a way to pay for college, seeing as his family can’t exactly afford it. 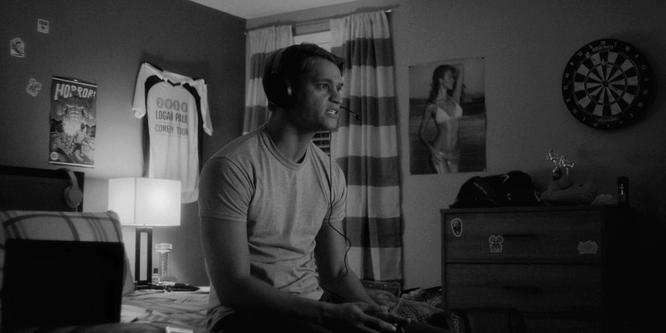 Young Aaron goes to Stonewall Jackson High School, where one morning after saying hi to his blonde girlfriend and his white friends all the seniors are summoned to the auditorium for a special announcement. Millionaire entrepreneur Robert “Shea” Lee, a Stonewall alumni played by the late controversial YouTuber Kevin Samuels, is giving away free scholarships to all Black students, so quite the pickle for Aaron.

This episode’s cultural references are really on the nose and it’s hilarious to see the school’s name be changed from Confederate general’s to another, but Aaron has a bigger problem. His white friends are pretty mad about whole scholarship program, they think its discrimination, Aaron is uncomfortable and reminds them that being poor and Black (or poor and white in his case) leaves you pretty disadvantaged, while Kate makes her argument referring to an unworthy collage scholarship recipient, a certain NBA superstar named Zion Williamson.

The episode tells the audience Aaron feels somewhat Black, but he doesn't hang out with the Black kids at school, who preface his Black audition in front of the Blackness court conformed by Lee and his entourage. Aaron gets all kinds of shade and insults thrown at him only to fail his proof of Blackness test, “the kid’s not Black" the court rules, but even calling him Clarence Thomas white is too much in these times where Supreme Court Justice's stance on reproductive rights prompts such heated debates.

Aaron has been “coasting on his whiteness” nearly all his life, but at the end of the day, it’s hard not to feel he’s been played, something largely achieved thanks to Tyriq Withers' performance. Atlanta’s third season has presented American audiences with different scopes of Blackness from other parts of the world and, sure, Aaron wouldn’t probably pass as Black in most of them like biracial Formula 1 champion Lewis Hamilton would, but the same applies for people that would be perceived as Black in other places and not in America.

The episode being shot in black and white and the fact that Aaron’s mom is never addressed are all on purpose to further blur these lines. To cap it all off, Kate leaves Aaron after a jealous tirade triggered by an Instagram comment from a Black college student - it’s all too much for him so inspired by his Flamethrower game Aaron gets as close as Atlanta will probably ever be to talking about school shootings.

He’s not the only one though, Lee’s Black gatekeeping has prevented a Nigerian American kid (just like Darius) from getting the scholarship he should have gotten, however, Aaron’s clear lack of empathy, nuance and touch now renders him quite unlikable. He survives getting his white boy shoes torched by Felix, who is shot by the police before getting to Aaron - in Lee’s eyes, there is no finer proof of Blackness than that, an argument that doesn’t splash over to Aaron as he watches on handcuffed from the back of a police car.

The final scene shows Aaron having gone an extreme makeover, one year later now out of prison working a retail job, he flirts with a Black girl until he runs into Kate; he flirts with her too, but differently, he’s a player now, a Black one at that, mind you. The camera cuts to him and the credits roll almost as if it were any Black sitcom from the 80s.

This episode has Glover’s fingerprints all over it, it’s kind of surreal but not quite leans into that genre as last week’s Atlanta trip to Amsterdam, nevertheless it’s a funny thought-provoking experiment. Atlanta’s finale will probably take place in Italy, but the question lingering in many fans' minds is what Glover wanted the show to be when season 4 drops later this year because his idea for season 3 could not be more clear.

MORE: The Case for Obi-Wan Kenobi to be the Protagonist of Star Wars Jedi: Survivor

4.5 out of 5 (Must-See)5 Movie Trilogies Where The Third Movie Is The BestRead NextShareTweetShareEmailRelated TopicsAbout The AuthorRaul Velasquez(732 Articles Published)

Raul is an attorney and writer with a fervent passion for all things culture, gaming, tech, finance, and languages. He firmly believes Marvel's Saturday morning cartoons led him to Game Rant. Find him on Twitter @RaulTweet

More From Raul Velasquez
Tags： who wants to be a millionaire electronic game
Latest： In review: licensing and taxation of gambling activities in India
Next： Conquering this FREE video game could make you rich beyond your wildest dreams
Popular Articles/span>