Called FriendO, the app lets users compete in "quizzes" to find out who their "real friends" are -- and teens are going crazy for it.

SEE ALSO:Here's how much better Snapchat lenses are on the iPhone X

Sort of like a non-anonymous version of tbh, which Facebook acquired last month, FriendO has been climbing up the App Store charts over the last month.

The app has a number of "categories" that friends can quiz each other on, such as what their favorite foods and sports are, or other personality traits. Users take turns answering questions about each other, and they're then ranked in an in-app leaderboard, which shows their scores.

"See if Johnny really knows what you like to eat, or if Becca really knows your favorite sports team," the app writes in its App Store description. "Only real friends will move up each others’ FriendO ranking board!"

Though FriendO is geared towards younger teens -- the app's terms of service state that users are required to be 13 or older -- there are some NSFW "categories" of questions that any user can unlock by inviting three friends to join the app. 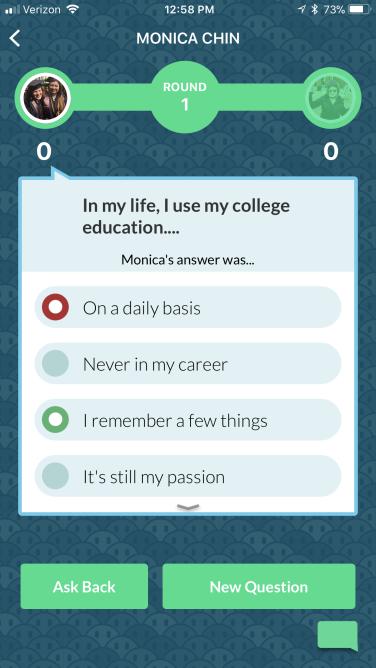 One, called "MSFK" -- short for "marry, sex, friend, kill -- quizzes users on what they'd rather do with a given celebrity.

It's not clear what, if anything, the app does to screen these questions for younger users. When you select a question from one of the NSFW categories, the app does ask for the other person's permission before showing them the question, but it doesn't appear to restrict content from younger users if both sides opt in.

This only seems to have helped FriendO's popularity, though, with many reviewers specifically calling out the "dirty" categories in their reviews. And the app is among the most popular apps in the App Store right now. It's currently ranked number five in social media apps and last week reached the #15 position for all apps (it's currently sitting at #46).

While the app's shoddy design -- its in-app icons look like they were pulled straight from a generic app-creation template -- make it tempting to label FriendO as a generic ripoff of tbh, the app actually predates tbh by about a year. About 84 percent of its 580,000+ downloads have come in the month of November alone, according to app analytics provided by app marketing firm Sensor Tower.

Still, FriendO appears to have benefited from the success of tbh -- the app only began taking off in the App Store and Google Play in the last month, around the time tbh was acquired by Facebook.

It's not clear who is behind the app. FriendO's website is little more than a landing page with links to its iOS and Android app, as well as terms of service. A link to the app's blog returns an error message. Messages sent to the app's Twitter account and support email were unanswered at the time of this writing.

Whoever it is, though, seems to have a winning formula with teens who are using the app as yet another way to "gamify" their friendships and find out what others think of them.

Related Video: KFC made a $10,000 pod to help you escape the holiday internet chaos

Tags： who knows math electronic quiz game
Latest： Riddle of the Week #8: The 'Die Hard' Jug Problem
Next： 20 things we don’t do anymore because of technology
Popular Articles/span>