In the words of the great Ron Burgandy: "That escalated quickly."

Sunday night baseball just got a whole lot more interesting, and so did the Subway Series rivalry, which was more like a soap opera tonight.

After Brad Hand served up a game-tying two-run home run to Giancarlo Stanton in the top of the seventh inning, benches cleared between the Mets and Yankees, as Stanton and Francisco Lindor began jawing at each other, as Stanton rounded the bases.

Of course, It all started in the bottom of the sixth when Francisco Lindor's second home run of the game extended the Mets' lead to 6-4. And afterwards, Lindor was seen whistling at the Yankees' dugout as he was circling the bases.

To provide context of the situation, third baseman Jonathan Villar told ESPN's Marly Rivera that the Mets believed the Yankees were whistling in signs on Saturday night when Taijuan Walker allowed five runs and three homers in the second inning. Once the Mets had a mound visit, realizing Walker may have been tipping his pitches, Walker proceeded to retire the next 16 hitters in a row.

Tonight in the series finale, Lindor took exception with the Yankees' strategy, and he let them hear it. This ignited an entertaining back-and-forth dialogue between Stanton and Lindor, following Stanton's game-tying bomb.

Benches cleared, and some bad words were said. Alas, Stanton's homer created a whole new ball game at this point.

However, Lindor rose to the occasion again, with his third homer of the game to give the Mets the lead back in the bottom of the eighth at 7-6.

Lindor, who had the first three homer game of his career, became the first player to ever hit three long balls in a Subway Series game. He also became just the 15th Met to hit three home runs in a game, and the 11th player in franchise history to homer from both sides of the plate in the same contest. 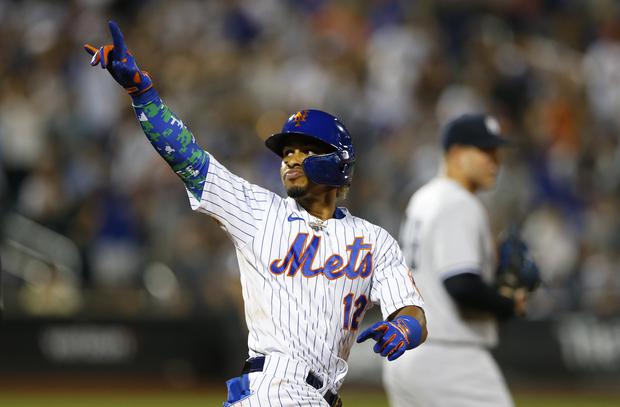 This set the stage for struggling closer Edwin Diaz to try to lockdown a one-run save in the top of the ninth. And as he often does, Diaz made things interesting. Luckily, Diaz prevailed by getting Stanton to pop out to, who else, but Lindor with the tying and go-ahead runs in scoring position. As a result, the Mets took two out of three games from the Yankees in the Subway Series.

"We all want that moment, because we do it for our fans and we do it for the organization," said Lindor. "I don't think Mets fans forget things, but I think maybe it will help them believe in me a little bit more."

With all the criticism Lindor has drawn due to an underwhelming start to his Mets career, it is probably safe to say that he won the city over tonight.

As for all the whistling, Lindor said he cannot accuse the Yankees of tipping signs, but he knows he heard something out of the ordinary, which he "took personal."

Although manager Luis Rojas didn't want to get into the benches clearing incident, he was more than willing to gush over his star player's big night.

Carlos Carrasco had a rough start to his outing, which has become the norm for him, but he bounced back to go five innings, while allowing two runs.

Lindor drove in five of the Mets' seven runs in this contest. With the Mets trailing 2-0 early, Lindor's three-run homer off Clarke Schmidt ignited some much-needed life into the team.