Finding and Catching Trophy Tarpon in the Florida Keys

March means big tarpon in the Florida Keys—around the abundant bridges and in the backcountry shallows. Flats and bay boats cluster around the bridges throughout the island chain. Anglers stage near these ambush spots where tarpon pick off baitfish and crustaceans carried by the tide.

But bridges offer challenges—like when a big fish grabs your bait and decides to run toward the structure.

Capt. Rick Stanczyk, who guides tarpon anglers out of Bud N’ Mary’s Marina in Islamorada, has developed proven tactics for landing those powerful fish. For starters, he says, take it easy on the tarpon.

Many anglers assume they must hammer the drag and pull the fish from the structure. “Actually no,” says Stanczyk, “you really want to let that fish go through the bridge and keep the drag loose, and then if the line rubs on the bridge it’s probably not going to break. If you’re pulling real hard, then the line is going to fray and break.”

Bridge tarpon generally fight harder than those hooked on the flats because of the stronger currents at the bridges caused by water funneling through the narrow openings. As Stanczyk notes, the moving water revitalizes the fish during the fight, prolonging it.

If the fish shows no sign of turning as it heads for a bridge piling, Stanczyk employs an extreme tactic that’s not for the faint of heart. He puts the rod on a seat cushion, puts the cushion in the water, and then follows the fish as it zigs and zags around the pilings.

“Loosen the reel’s drag and just put the rod through the straps of the seat cushion. As long as the drag’s loose, it won’t pull out,” he says. “It floats through the pilings, then you pick it up. Sometimes if you’re lucky, it doesn’t even get wet.”

For that reason, Stanczyk purposefully uses older tackle, such as beat-up Daiwa BG90 reels packed with grease and spooled with 50-pound braid and 60- to 100-pound monofilament or fluorocarbon leaders (depending on the water clarity).

Stanczyk says that on one evening trip, when his angler hooked a 100-pound tarpon by a bridge, they had to deploy the rod on the seat cushion five times before finally landing the fish.

Preferred locations in Islamorada include the Channel 2 and Channel 5 bridges. In the Marathon area, try the Seven-Mile and Bahia Honda bridges. Most anglers use live crabs around bridges and channels early in the morning and in the evening. During the day, the majority fish with live silver mullet.

Stanczyk sets up where he sees tarpon rolling on the surface, swimming under his boat or showing on his sonar unit. Novice bridge fishermen “could probably set up anywhere near the bridge and catch resident fish traveling back and forth,” he says. 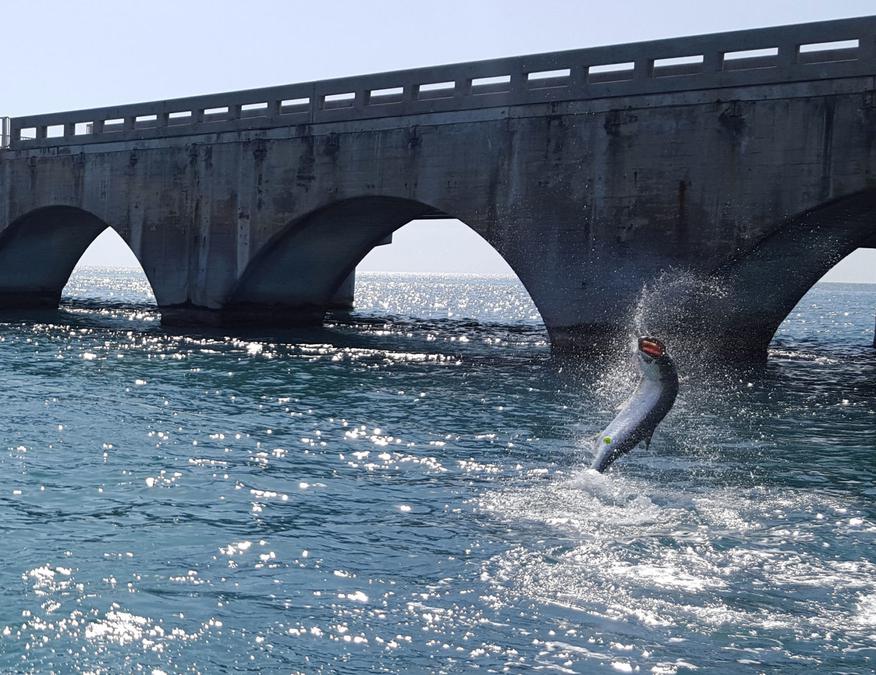 When fishing live crabs, Stanczyk drifts because of the strong current. Mullet can swim in the current, so he can anchor in front of, under, or on the back side of a bridge, depending on the tide and where he sees fish.

Captains who anchor must tie a buoy to the end of their anchor line or use an anchor-retrieval system. When they hook a tarpon and the fish takes off, the mate can release the anchor line from the cleat to chase the fish. When the crew returns to the bridge, the buoy marks the location of the anchor.

Once set up at a bridge, give your spot 20 or 30 minutes. If you don’t get bites, try another spot, and then another, Stanczyk says.

Stanczyk finds less boat traffic as well as abundant tarpon in the backcountry, which comprises Florida Bay and Everglades National Park. “We get a lot of fish back there in the late winter, early spring,” he says. “These days there are definitely other boats back there but it’s more open water.”

As he runs his 25-foot Contender bay boat north from the Keys, he looks for tarpon rolling at the surface. If he sees that, he anchors in front of the fish and drifts back live baits, preferably pinfish.

He spools his heavy spinning outfits with 300 yards of 50-pound braided line. He ties 20 feet of 60-pound monofilament to the braid and attaches a swivel. To the swivel, he adds a 6- to 8-foot leader of 100-pound monofilament with a foam float. In clear water, he bumps that down and uses a 60- or 80-pound fluorocarbon leader. He pins the bait on a 5/0 to 8/0 J hook, using the bigger hooks for bigger baits.

“In spring, we generally catch larger fish on average. The migrating fish are showing up, which are a lot of the bigger females (80 to 120 pounds) coming in to spawn,” Stanczyk says. “You can still catch plenty of smaller ones, too. July through the fall we have resident fish that are 30 to 50 pounds.”

When anglers hook a big female tarpon, they often immediately apply pressure, but that can be a mistake.

Stanczyk keeps the drag light to start, reeling enough to keep the line tight and to apply a little pressure. Once the fish settles a bit, he begins to tighten the drag and pull harder.

If he doesn’t see tarpon on the surface as he runs in the backcountry, Stanczyk studies his side-scan-sonar returns, which not only indicate individual tarpon and schools, but also likely fish hangouts.

Once he locates a good spot, if he doesn’t see fish, he marks and stores the waypoint so he can return on different weather and tide conditions. If he sees fish rolling or free-jumping, he looks at the sonar and charts to determine what attracted them to the location.

“They kind of have their areas that they like, where you know you’re going to find them if they’re around,” he explains. “A lot of times it’s just kind of running from spot to spot and looking.”

Read Next: Fishing in the Florida Keys All Year Long

Stanczyk’s advice to anglers scouting bridge-fishing locations applies to the backcountry. Give a spot 20 or 30 minutes before trying another area.

“If nothing’s happening then I’m usually moving,” he says. “It’s kind of like playing pool. When you’re good at it you’re thinking three moves ahead… Sometimes plan A, B and C don’t work so you’ve got to have a D, E, and F that you feel confident in.”

And there’s no better time or place to build your tarpon-finding and fishing confidence than right now through May in the Florida Keys.