Fifa and EA Sports: Why have they split and what next for the money-spinning video game franchise?

It’s fair to say that Electronic Arts’ (EA) first soccer video game wasn’t exactly a priority for the company. Development of the title flew under the radar of executives more occupied with their successful adaptation of North American sports like American football and ice hockey.

As the December 1993 release date inched ever closer, the small production team were quietly confident they had something special on their hands. Yet EA wasn’t convinced a game based on soccer would sell in huge numbers and insisted on a licence – any licence – to drive awareness and shift copies.

In the absence of a centralised body like the National Football League (NFL) or the National Hockey League (NHL), the obvious target was the Fifa World Cup, due to be held in the USA in the summer of 1994.

Unfortunately, another publisher had got in there first so it was decided that the next best thing would be Fifa itself. It didn’t matter that soccer’s global governing body didn’t own the rights to any teams, competitions, or player likenesses; it was obtainable, and the royalty payments were said to be miniscule.

FIFA International Soccer went on to be a critical and commercial success, laying the foundations for a wildly successful series and a partnership that lasted nearly three decades. The FIFA series generates billions of dollars in revenue so confirmation this past week that the two parties would go their separate ways at the end of this year was a bit of a shock.

How did two partners that have presided over an electronic entertainment behemoth that has changed the way an entire sport is perceived and played decide to call it a day?

EA plans to adopt its own brand from 2023

How did we get to this point?

Since that first five-year agreement was struck, reportedly over a dinner in Switzerland back in 1993, EA Sports and Fifa have extended their arrangement on multiple occasions, first in 1998, again in 2006, and finally in 2013.

Over the course of their relationship, the worlds of soccer and video games have transformed beyond recognition. The sport, and especially Fifa, has become far more aware of the value of its commercial rights while technological advances and greater business acumen have turned video games into a multibillion-dollar industry in its own right.

Fifa’s brand helped establish EA Sports’ soccer series in the minds of consumers, but didn’t include any rights to teams, players, stadiums, or kits. Instead, EA had to negotiate these with individual leagues and player unions. The company felt these licences were critical to its success – especially as graphics became more realistic – and secured as many exclusive arrangements as possible so that competitors could not keep up.

This wealth of intellectual property saw FIFA fend off numerous pretenders to the throne and ensured it still sold millions of copies even in the mid-2000s when it was acknowledged that Konami’s Pro Evolution Soccer series was the superior option. But by the early 2010s, FIFA was the only game in town as even Konami struggled to keep up with EA’s vast resources.

Another reason behind this success was the popularity of FIFA Ultimate Team (FUT), a mode in which gamers assemble teams of players using virtual cards and compete online. These cards were obtained either via an in-game marketplace or through random packs that can also be purchased using real world currency.

For many players, FUT is the only way they play FIFA and this has spawned an incredibly engaged user base willing to devote vast amounts of time and money into it. Ultimate Team has since been replicated across many of EA Sports’ games and is now the most profitable area of the business, generating US$1.62 billion in 2021.

Put simply, the Fifa brand is no longer essential for awareness, it doesn’t include any licences, and it could be argued that EA Sports has outgrown it. 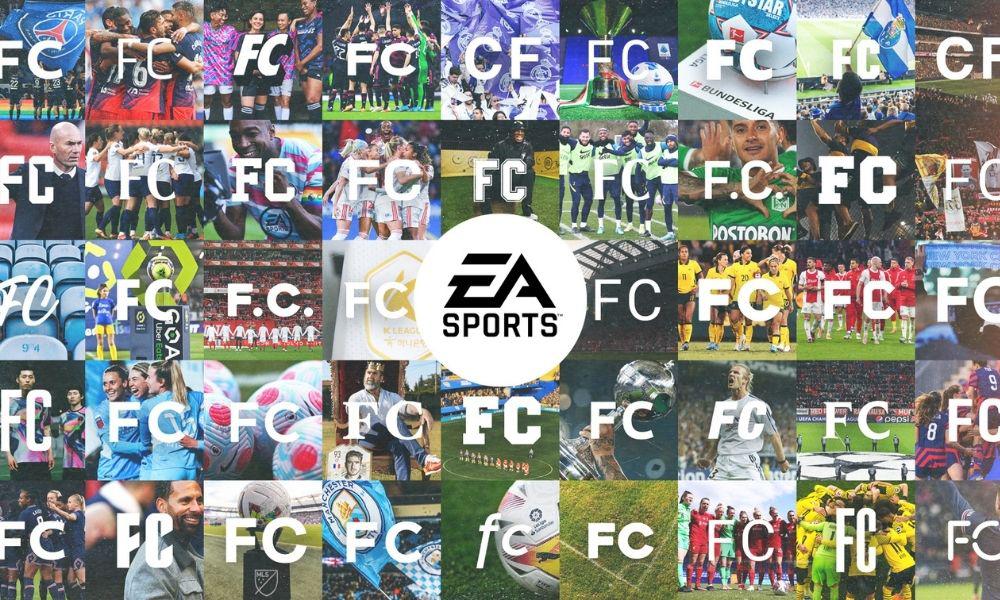 What was the dispute?

That’s not to say EA Sports didn’t want to continue the partnership. The company saw no need to unnecessarily jeopardise its most profitable series, but it did want more freedom. Specifically, it wanted to do more with its games, stage esports tournaments, and release non-fungible tokens (NFTs) based on FIFA.

Fifa, on the other hand, believed such exclusivity would prevent it from pursuing other digital opportunities that could yield yet more revenues. The governing body wanted EA’s rights to be limited to a soccer simulation and, not only that, reportedly wanted its annual fee doubled to US$300 million.

The first sign of tension was a blog post in October that confirmed EA was considering a name change.

‘As we look ahead, we’re also exploring the idea of renaming our global EA Sports soccer games,’ wrote Cam Weber, EA Sports general manager. ‘This means we’re reviewing our naming rights agreement with Fifa, which is separate from all our other official partnerships and licences across the football world.’

The post put pressure on Fifa to compromise and prepared fans for a potential change. But the message was clear: EA viewed these demands as unpalatable for a licence that was little more than a name (excluding the Fifa World Cup, of course).

Six months of further negotiation failed to yield a breakthrough, and earlier this week EA confirmed that it would be going it alone with its own brand.

What does it mean for EA Sports?

The present licensing agreement continues until 31st December 2022 and FIFA 23 will be the final EA Sports FIFA game when it is released this autumn. Starting in 2023, EA’s soccer games will be released under the ‘EA Sports FC’ banner and will include more than 300 licences, giving players access to 19,000 players, 700 teams, 100 stadiums and 30 leagues.

These statistics demonstrate that the loss of the Fifa licence will have little material impact on the game and it is likely EA’s highly-engaged fanbase will understand that EA Sports FC will be FIFA in all but name.

Furthermore, the absence of a genuine competitor in the space mitigates the threat of a rival publisher securing the Fifa licence. Even if they did, there’s no guarantee such a tactic would work. When Football Manager developer Sports Interactive split from publisher Eidos in 2003, the former retained the source code while the latter kept the ‘Championship Manager’ brand, believing it to be the more important asset.

Sports Interactive initially feared that players would be unaware of the split and purchase the ‘new’ Championship Manager. However, the online community helped spread the word, players understood that Football Manager was the better game and now it is the only major soccer management simulation on the market.

“Our vision for EA Sports FC is to create the largest and most impactful soccer club in the world, at the epicentre of soccer fandom,” said EA chief executive Andrew Wilson. “For nearly 30 years, we’ve been building the world’s biggest football community – with hundreds of millions of players, thousands of athlete partners, and hundreds of leagues, federations, and teams. EA Sports FC will be the club for every one of them, and for football fans everywhere.”

EA’s fanbase will help drive awareness of EA Sports FC, as will partner leagues and clubs. While most players will still call it ‘FIFA’ for a while, it’s not far fetched to suggest that ‘FC’ will gain just as much traction.

Ditching Fifa is simply not the risk it once was for EA Sports and it will be free of the restrictions that the licence came with. Not to mention the fact it will be saving hundreds of millions of dollars.

What does it mean for Fifa?

There’s no denying that this is a bigger blow for Fifa than it is for EA Sports. Video games and esports are now such an important channel for growth and engagement and the FIFA series is the main way that many younger fans interact with soccer.

For most soccer teams, leagues, and federations, not being included in FIFA could be detrimental and there is an argument that the direct revenues are far less important than exposure and engagement.

Fifa had the luxury of not just getting that exposure but being synonymous with one of the biggest video game series on the planet – and being paid handsomely for it, too. Now it seems as though it has relinquished this privileged position because it overestimated the value of its brand to EA, which had become the dominant partner in the relationship.

Now, Fifa must find a way of replacing a financial shortfall and finding an alternative video game partner in an area that isn’t exactly blessed with alternatives. It’s a tall order, but in public at least, the organisation is typically bullish. It says that the end of the agreement with EA frees it up to pursue a range of gaming opportunities and that it plans to work with a third party to create a new simulation game by 2024.

“I can assure you that the only authentic, real game that has the Fifa name will be the best one available for gamers and football fans,” declared Fifa president Gianni Infantino in typically bombastic fashion. “The FIFA name is the only global, original title. FIFA 23, FIFA 24, FIFA 25 and FIFA 26, and so on – the constant is the Fifa name and it will remain forever and remain THE BEST.”

“The interactive gaming and esports sector is on a path of unrivalled growth and diversification. Fifa strategy is to ensure we can make the most of all future options and ensure a wide range of products and opportunities for gamers, fans, member associations and partners.”

Finding partners for mobile and casual games should be relatively easy, but building a high quality soccer simulation game will be much, much harder. The cost of development and acquiring licences has proved prohibitive for any challenger to EA Sports, which has the exclusive rights to most competitions anyway. Even Konami has had to adapt a strategy of working with individual clubs and has struggled to reboot its long running series as ‘eFootball’.

However, Infantino’s bullishness adds strength to the argument that this feels like a huge miscalculation from a governing body that has lost a highly privileged position and will now have to put in far more effort than it had to do previously, possibly without the same returns.

Tags： what are electronic games
Latest： A female video game pioneer was lost to history — until now
Next： Guide: Casinos
Popular Articles/span>