PARIS -- It is a scene synonymous with Roland Garros: an umpire coming down from his chair to check a ball mark, the players and fans waiting for the decision and the crowd whistling or cheering, depending on their allegiance.

The French Open is the only one of the four Grand Slam tennis events not to use electronic line-calling, in one way or other.

Hawk-Eye Live -- with which all calls are made electronically -- was used at the Australian Open in February and will be in operation at the US Open later this summer. Wimbledon also uses Hawk-Eye but with a challenge system, with each player allowed up to three incorrect challenges per set.

But the French Open continues to hold out despite numerous arguments and discussions over the past week and a half between players and umpires over ball marks, the space between the ball and the line and, sometimes, over which mark is the right one. The on-court, real-time disputes also have come at crucial game moments, most recently in one of the women's semifinals matches Thursday.

As Barbora Krejcikova held a match point in the final game of the third set, her opponent, Maria Sakkari, sent a forehand down the right-side baseline. Krejcikova raised her hands to signal a victory, thinking the ball was out, but chair umpire Pierre Bacchi called the shot good and ruled that the point be replayed. Hawk-Eye's view on television broadcast showed Sakkari's shot to be long, and it wasn't even close.

If Krejcikova didn't hit a backhand winner to lock up the victory five points later, Roland Garros officials would have had to deal with a lot more controversy and criticism.

"I was horrified when they showed the mark was out after the umpire had called it in, and I was thinking she might not win the match even though she has won the match," ESPN television analyst and 18-time Grand Slam winner Chris Evert said during a Eurosport broadcast of the match. "During the whole tournament, there were some big points with some bad line calls. It's not just this one time, so that's why I feel the system isn't working right now."

Organizers and players are split on whether Roland Garros should follow the example of the other tournaments or not.

"No Hawk-Eye on clay, it's difficult," said Krejcikova, who advanced to her first Grand Slam singles final. "Sometimes it's a help, sometimes it doesn't. At that moment I was like, 'Well, it's out, but what can you do? ... I cannot do anything about it. I cannot call anyone, change [the chair umpire's] decision."

"The bottom line, before doing anything new, is that it's people's jobs that we're talking about," Forget told ESPN. "It's not just 'machine versus a man's eye.' We have a very good way of teaching from a young age, a chair umpire and linesman. In our country, we have some of the best umpires and one of the reasons is that this is so consistent; we have multiple tournaments in France throughout the season, they are very active and they go from being a linesman to eventually a chair umpire and [some] to a referee."

Tennis players are creatures of habit. Growing up always believing what their eyes tell them when they look at a mark on the court, it's not easy to suddenly change and accept a machine, especially if it contradicts their eyes.

"Of course, the machines are very accurate, although on clay its only drawback is you could potentially have a mark ... touching the line, everyone would see the actual picture of the mark on the screen and [the computer] would [say] out," Forget said. "Every single player in the world, when there's a [disputed] call, will go to the mark and look."

Electronic line-calling has been in place since Hawk-Eye was first approved on hard courts in 2006, following a number of controversial calls at big moments -- most notably at the 2004 US Open when Serena Williams was the victim of an incorrect decision in her quarterfinal against Jennifer Capriati.

Since then it has become a part of the ATP and WTA tours, but there is still doubt about its effectiveness on clay, where the surface can change during a match. In dry weather, the top layer gets blown off and the ball mark explodes, spreading out. If a match is played in light rain, the lines can appear shiny and affect the computer's ability to make the right call.

The ATP Tour has been testing electronic line-calling on clay through a one-year trial, which began in Rio de Janeiro in 2020. It was put on hold because of the pandemic, but it was used again at last month's Madrid Masters 1000. 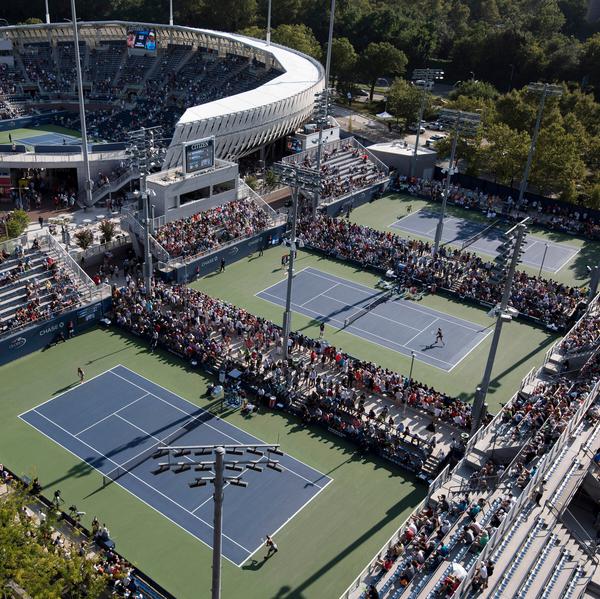 "The feedback we received from ATP and WTA players is very positive," he said, adding that the umpires were also happy not to have to come down and, on occasion, argue with the players.

"Some players looked surprised when the [chair umpire] advised them about the use of electronic line-calling on clay at the beginning of the match but assimilated the use of it pretty quickly and smoothly," Ferrer said.

Foxtenn is so far the only system approved for clay on the tours.

Spaniard Paula Badosa, who played in Madrid and reached the quarterfinals at Roland Garros, said overcoming the natural inclination to trust the marks might take time.

"It's different and it's a little bit weird because we're not used to that," Badosa told ESPN. "They say it's 100 percent true and everything, so I have to believe it.

"Sometimes you see the [mark] of the ball that maybe looks a little different. We're not used to it, but I think slowly we're going to get used to it."

But Badosa said she liked to play with linespeople on clay courts.

"I maybe prefer people because they're people and it's their job," she said. "I prefer to have them because they work for it and I think they deserve it."

Paul Annacone, the former coach of Roger Federer and Pete Sampras, is working at Roland Garros for the Tennis Channel, which is using Hawk-Eye on its broadcast to compare calls on the court to electronic ones.

"It's really interesting," Annacone told ESPN. "There have been a lot of misses, and misses where the players actually would agree with whatever happened. I can't believe how many differences we've seen. I mean, yesterday [Monday] we probably saw four and some of them were like 11 millimeters.

"I think the ability to streamline it and just to use it, I think the players can adapt and adjust. I'm for simplicity, but most importantly, I'm for getting it right."

Annacone said he understands the human element to calling lines, but ultimately electronic calls should win out.

"Look, I don't want people to lose jobs, the linesmen, that gives me pause," he said. "But then you see how many times the umpire is coming out of the chair. They argue about not only which ball mark it is, but did this granule move, did that not? Did the wind from the ball flying move it? I just think some simplistic way of doing it would be great. And I think the players would get used to it.

"I like the idea of just going, look, it's the machine. There's a plus or minus two millimeters, and that's what we're going with. I think over time, players would argue less and it would become more welcome."

Forget said he could see electronic line-calling used as a backup to the umpire, especially in the case of spotting the correct mark.

But the former world No. 4 said he also felt the whole spectacle of an umpire coming down from the chair made Roland Garros unique among the Slams.

"In my opinion, it is a very simple and actually nice way of having an exchange with the players and umpire and the crowd likes it and they kind of go, 'Oh, oh, oh,' and wait for the reaction," Forget said. "I think that adds a bit of spice to the situation.

"I'm very much in favor of keeping the linesmen. I think they add value to the sport. I think it's wonderful to have them and I hope it'll stay like that, especially on clay."