Today, we take a look at small cap concern with the interesting name of Enthusiast Gaming Holdings (NASDAQ:EGLX). Enthusiasm for the company's shares have left since the company came public via IPO and the stock finds itself deep in 'Busted IPO' territory despite sizzling revenue growth. Time to buy the dip? A full analysis follows below.

Enthusiast Gaming Holdings is based out of Toronto, Canada. The company has a very diverse variety of interests in the gaming space which is captured via the company profile: 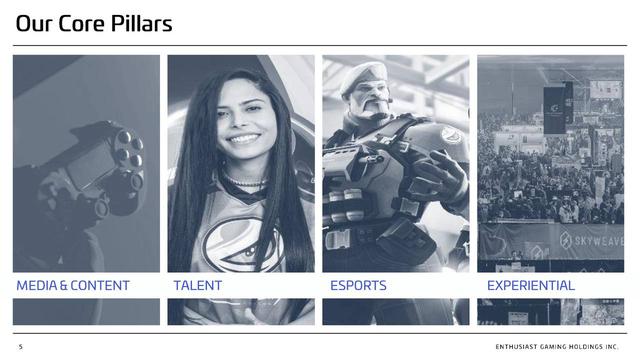 The company is positioning itself to ride the huge growth across the gaming industry. It is also dabbling in the NFT space, which an article last fall went further into.

In addition, the company is making a big bet on Generation Z which are its core customers along with Millennials as it bets that online gaming develops into a huge and powerful social network over time.

The company is increasing using the high engagement of this social network to craft unique and effective campaigns for numerous brands and this is a core part of management's growth strategy.

The company posted third quarter results on November 11th. Overall revenues rose to C$43.3 million from C$16.3 million in the same period a year ago. Direct sales were up 580% to C$6.8 million, while paid subscribers rose 85% from 3Q2020 to 207,000. Direct sales made up 16% of overall sales in the third quarter compared to just three percent in 3Q2020. This helped improved overall margins for the company revenue mix. Net loss did widened to C$12.3 million or a loss of 10 cents a share on a GAAP. Net cash used in operations was flattish at C$3.8 million.

The company also completed the recent purchases of GameKnot and Addicting Games during the quarter which is part of its strategy of doing numerous 'bolt-on' acquisitions to bolster its offerings. The company also acquired Outplayed for ~$45M in cash and stock as well as $12 million of potential earn outs in late November. Outplayed owns U.GG, one of the largest League of Legends fan communities. This online game has a huge audience and the U.GG is expected to contribute $8 million of revenue and $3 million in net income in FY2022.

In late January, the company reported nearly 52 million unique visitors for December. This is up more than 250% over the previous three years. Just over a week later, management gave preliminary Q4 guidance. This called for fourth-quarter revenues of C$56.9 million. This was well above the C$41 million analyst consensus. Direct sales are expected to come in at C$8.8 million, up 167%, and company is also expected to report 220,000 paid subscribers for the quarter.

The analyst community is sanguine about the company's prospects. So far in 2022, five analyst firms including RBC Capital and Canaccord Genuity have chimed in on Enthusiastic Gaming, all with Buy ratings. Two of these did contain downward price target revisions after the company's last quarterly report. Price targets proffered range from $5.50 to $12.00 a share. The company ended the third quarter with just over C$33 million in cash and marketable securities on its balance sheet.

Enthusiastic Gaming seems a reasonable proxy for the growth in the electronic gaming space and thus worthy of a small 'watch item' position for the moment. Compared to the four to ten times sales I see often when looking at small unprofitable SaaS concerns experiencing similar growth trajectories, EGLX at around two times revenues seems a decent value. Investors will get an updated set of data points Monday, when the company is scheduled to report fourth quarter results.

"Time is a game played beautifully by children." ― Heraclitus

Bret Jensen is the Founder of and authors articles for the Biotech Forum, Busted IPO Forum, and Insiders Forum