Paul McGowan, 58, a regular at Moe’s Bingo on Eastern Valley Road, said he enjoys playing electronic gaming machines and he gets paid in cash for his winnings, just like he would in Las Vegas.

“I don’t know, and I don’t care,” said McGowan, who lives a few blocks away from Moe’s, between Bessemer and McCalla. “It’s that or watch TV. I don’t like fishing or hunting.”

McGowan says he’s retired military and since he feels he has nothing better to do, he plays the machines. “I’ve seen people put their whole disability check in,” McGowan said. He only plays what he can afford to lose, he said.

“I got quitting sense,” he said.

While gambling is allowed in places with special legislative approval such as the Birmingham Race Course, where people once bet on live horse races, then live dog races, and now videos of dog races, most bingo halls don’t have legal permission to operate gambling establishments, although many do have business licenses.

Valley Bingo and Moe’s Bingo, both a short drive down Eastern Valley Road from Jonesboro Elementary School, have dozens of electronic gaming machines lining the walls. Cigarette smoke wafts through the air. In a joint where you can play electronic slot machines for cash prizes, no one seems to care if you light up a cigarette. No customers are complaining about second-hand smoke in here.

He knows he won’t get rich off these machines, but he felt like a winner that day.

Alabama Attorney General Steve Marshall led a crackdown on similar bingo halls such as Spin It and Win It Charity Bingo in Graysville in 2019. Gradually, they’ve popped back up, in dozens of locations all over Jefferson County. Some bingo halls have appeared in heavily trafficked areas such as Eastern Valley Road and some are more remote, such as on Birmingport Road near the Black Warrior River. Jefferson County commissioners say they are trying to get an accurate count of how many bingo halls are operating but don’t have one yet. Some residents say there are as many as seven operating within a two-mile radius on U.S. 78 in Forestdale.

“The reality is, these are illegal,” Marshall said. “Electronic bingo has never been authorized in Alabama.”

Marshall said Jefferson County Commissioners have kept him informed about electronic gaming operations continuing to pop up and thrive in the county.

“Here’s the reality on that,” Marshall said Thursday after speaking at the Irondale Chamber of Commerce meeting. “Right now, we continue to have, at least seemingly, a position from the sheriff’s department that it is not going to enforce it. It’s not surprising you’re seeing the growth here.”'

Agee said the business licenses could be revoked.

“If they don’t want these establishments, the easiest thing for the municipality is to revoke that,” he said. “We have to prove what they’re doing is illegal. We have to hire an expert to testify that this is a gambling device.”

Previous efforts have failed because there’s no teeth in the law, which allows charity bingo, he said.

“It is very confusing,” Agee said. “There’s ambiguity. Is it bingo or is it based on slot machines? There are computer programs where they say it’s not gambling, that what they’re doing is legal. It’s been going on the last 20 years without clarity. Is this allowed, is it a misdemeanor, who is responsible?”

Shutting down bingo halls and seizing electronic gaming machines can be an expensive law enforcement undertaking, yet it’s like playing whack-a-mole, some officials say. Bingo hall owners did not respond to messages left with employees.

Jefferson County Commission President Jimmie Stephens said commissioners have complained to Sheriff Mark Pettway and they’ve complained to Marshall. They say they try to remain vigilant when potential bingo operators come before them.

On Feb. 17, they denied a rezoning request from a company suspected of wanting to start yet another bingo hall on Eastern Valley Road.

Attorney Brandon Prince, who represented the owners before the county commission, declined comment. 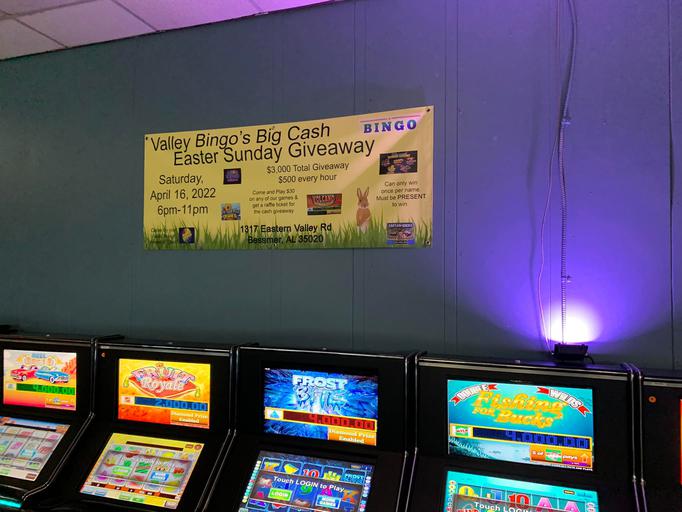 “There’s a disconnect between the county commission and the sheriff,” said the Rev. Jason Leight, pastor of Eastern Valley Baptist Church, who spoke out against a rezoning request for what he assumed would be another bingo hall on Eastern Valley Road. “We have bingo halls popping up all over the county. They’re moving into our residential neighborhoods.”

What was once a quiet neighborhood on Eastern Valley Road, some worry, is turning into a gambling strip worthy of Nevada, or at least the Alabama version of it.

Jefferson County commissioners say that limited liability corporations fill out the paperwork properly and pay their fees, but don’t usually mention they plan to operate a bingo hall.

Agee urges government agencies to yank business licenses if they feel an establishment is running afoul of the law. “They can be revoked for cause,” Agee said.

The sheriff’s office continues to be in communications with Jefferson County commissioners, he said.

“We will do whatever is necessary,” he said. “It may come to chaining the doors. Whatever the municipality wants to do, we will work with them.”

In April 2019, Marshall’s office led a raid on four bingo halls in Jefferson County, arresting 12 people, who were charged with multiple counts of promoting gambling and possession of illegal gambling devices, all misdemeanors.

“We still have pending, both criminal and forfeiture cases, from the initial work that we did,” Marshall said. “The reality is that, because of lack of enforcement afterwards, they come back.”

The four search warrants in 2019 led to the seizure of more than 1,100 electronic bingo machines, records, and an unspecified amount of money from the gambling halls.

“We want local law enforcement to engage in those efforts where they’ll be able to support it,” Marshall said.

“For 20 years we’ve been dealing with this issue,” Agee said. “It needs to be clarified by the state. The only ones arrested are the frontline workers. These owners, I don’t know of any of them who have been charged.”

Graysville passed an ordinance in 2019 allowing qualified nonprofit organizations to buy bingo hall permits, hoping to generate tax revenue after the neighborhood Lowe’s closed and dealt a blow to the city’s revenue. Among those who applied for permits was Sheriff Mark Pettway’s brother, Bruce Pettway, who filed a lawsuit claiming Marshall’s office illegally seized $240,000 from a bank account belonging to his brokerage and consulting firm. Marshall agreed to return most of that money after Chief United States District Judge Karon Bowdre ruled that the forfeiture of the $240,000 “strikes the court as facially suspect.”

Marshall doesn’t rule out the possibility of another state raid on bingo halls.

“It is conceivable,” he said. “It’s always our hope for local law enforcement to engage in those efforts.”

Meanwhile, at Moe’s Bingo, the games go on in an ambiance of forlorn entertainment worthy of the hanging tinsel.

“It seems like a video game,” said Staice Collins, 24, who left her four children, ages 5, 4, 1 and four months, with her mother so she could play electronic bingo as a break from the kids.

Another military veteran, Craig Burroughs, 43, says he’s retired from the U.S. Army and plays electronic bingo as often as five days a week.

“What attracts me is you can walk out with your winnings,” Burroughs said.

He’s also not sure it’s legal to have a bingo hall paying out cash to customers.

Sometimes the wisdom of playing also seems questionable for customers such as himself when he has an extremely unlucky day on the machines, he admitted.

Note to readers: if you purchase something through one of our affiliate links we may earn a commission.