Burbot, or better known as eelpout, are a disappointment to many anglers. They eat the same things as walleyes, so when you hook a nice one the initial thought is it’s a big walleye. They bulldog and stay down, but it’s not quite the same fight.

Experienced fisherman can tell the difference pretty much right away, But to an angler that has not caught very many, it just feels like a big fish and the excitement level that comes along with it. But once a glimpse is seen down the hole, that excitement can turn to disappointment as they realize “It’s just an eelpout!”

But, to anglers that know what an eelpout tastes like, the excitement of catching one continues knowing what fine table fare they are. This is why they are known as “Poor man’s lobster”.

Growing up ice fishing on Mille Lacs Lake back in the 70’s and 80’s I have vivid memories of the ice being literally littered with frozen eelpout left to rot. We actually used to play eelpout football with a frozen one when the fishing was slow.

Back then nobody I knew ate them, and they were considered a “rough fish”. According to Wikipedia, that term, “Usually refers to larger game fish species that are not commonly eaten, are too rare to be commonly encountered, or are not favorably sought by anglers for sporting purposes.”

At one time there used to be dumpsters at the public accesses specifically for rough fish - mostly carp and suckers, as it was illegal to return the labeled fish to the water if caught. That is not the case anymore, and now would be considered wanton waste.

On March 1, 2020, the state legislature reclassified the eelpout as a game fish. That change will set catch limits and requires that all eelpout caught be either consumed or released. The new burbot regulations will be in the 2022 regulation book.

About the mysterious burbot

According to the MN DNR website, burbot is derived from Lota lota (low’-tah low’-tah): from the French word for codfish; “burbot” is also a French word, meaning “mud” or “mire”. Burbot is only one of numerous names this cold-water species from the cod family goes by. Many of the freshwater cod’s nick-names can’t be mentioned, but here is a list of the most common: Eelpout, lawyer, ling, cusk, lush, loche, mudblow and poor man’s lobster.

On the site, the DNR describes eelpout as this: “With its slimy skin and tendency to wrap itself around your arm, the burbot is considered by many anglers to be the “ish” of fish. But this cousin to the saltwater cod, commonly known as eelpout, is a remarkable predator that is excellent to eat. The burbot looks like a cross between an eel and a catfish. It has a long body with smooth skin and a single whisker under its chin.”

That is definitely an accurate description, and probably the main reason a lot of anglers do say “Ish” when they see this pariah. One look at their small beady eyes and long spineless body will definitely give the impression of an eel like species. 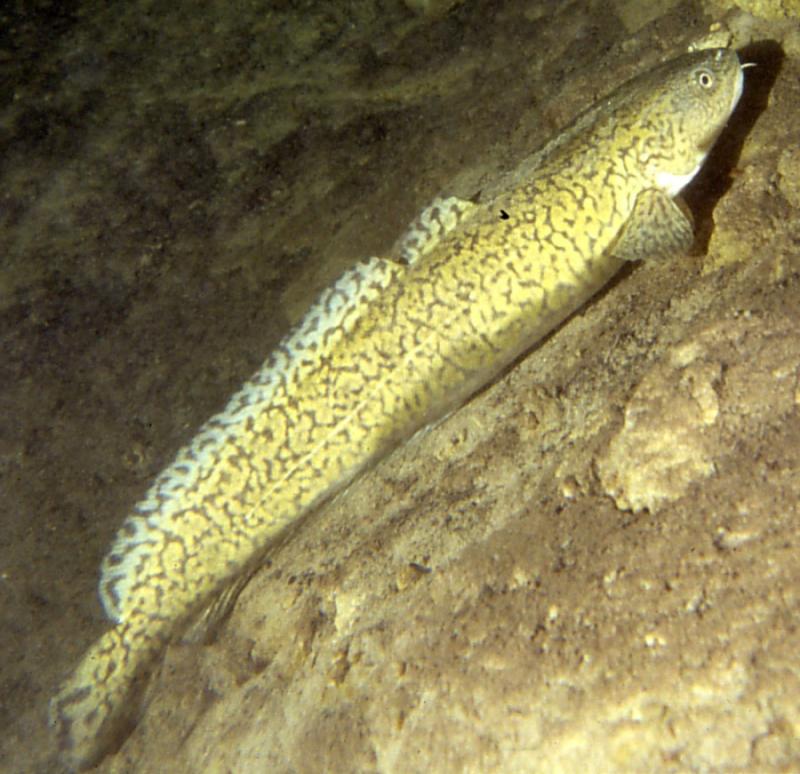 According to the DNR, the spawning season for this unique fish is very unusual. They spawn during mid-winter into early spring, before the ice is off the lake or river. Reproduction occurs in pairs or sometimes in groups of dozens or even in the hundreds, in shallow water over sand or gravel bottoms.

There is no nest built and no care for the eggs or newly hatched young. After the release of eggs and sperm, the fish thrash about scattering the eggs, which later fall to the bottom. A single female can lay as many as 1 million eggs depending on her size.

Burbot coloration varies from yellow-brown to brown or even dark olive with black mottling and blotching, giving it almost a camouflage appearance. Burbot resembles an eel more than other freshwater fish. Its scales are small, the skin has a slimy feel and this bottom hugger has a large chin barbel with tubular nostrils similar to catfish, for detecting food.

Burbot can be found in most Minnesota northern lakes and rivers, including Lake Superior, but can also be found in small numbers in the prairie regions and parts of the lower Mississippi. They are good indicators of a healthy watershed. Typically they require water temps lower than 70 degrees during the summer and are a rare catch, but come winter-time, these predators come alive and are most active in frigid waters.

Burbot can live up to 15 years. The Minnesota state record is 19 lbs. 3 ozs. and was caught in Lake of the Woods in 2016. These fish can weigh over 60 lbs in other areas of the world, but typically in Minnesota, they are under 8 pounds, and are less than 28 inches in length.

Burbot is the only gadiform freshwater fish. Gadiformes are an order of ray finned fish (also called the Anacanthini) that includes the cod and its allies.

Gadiformes are physoclists, which means their gas bladders do not have a pneumatic duct. In other words they can not burp like a trout, salmon, pike or catfish when they come up rapidly through the water column.

Burbot embryos hatch at the tiny size of .15 inches (one of the smallest freshwater fish larvae).

Burbot have long been used for fish meal, oil and food for animals raised for furs (the oil is absorbed through digestion making for a great fur conditioner).

The burbot’s tough skin was once used in the windows of Siberia as a substitute for glass.

Beginning December 1, 2021, no burbot harvest is allowed.All eelpout must be immediately released.

In a recent email from the Minn DNR Mille Lacs Lake Area Fisheries Supervisor, Tom Heinrich said “The burbot decline (in Mille Lacs) I’m pretty sure is related to the longer ice-free periods we have been experiencing in recent years, and this is similar to what other lakes have measured.”

Hopefully, the weather patterns of late are cyclical, and along with the new regulation, burbot will make a comeback on the big pond - as they are a vital part of the lake’s ecosystem.

And remember, for now, Mille Lacs is off limits to harvesting this seemingly outcast species that has recently been promoted to “game fish” status. But the next time you catch one, be sure to be just as respectful to this species, as you would any other game fish to be released.