Daily Sabah Chatting over TEA: Down the rabbit hole of EA’s Battlefield 2042

It has been four months since Battlefield 2042 launched across multiple platforms to nearly universal criticism. A couple of patches, a holiday break and four months later, the game now sits at record low player counts with its predecessors and competitors eclipsing any highlight it ever had. So, let's take a look at this abomination of a game's development, and what lessons Electronic Arts – still waiting for a name change – will not learn from it, and what it says about the gaming industry in general.

For a true deep dive into the miscalculations of EA and DICE – the developer studio behind the Battlefield franchise – we need to take a long-winded detour into the history of the franchise and of this particular game's journey through development, a story mired with miscommunication, misjudgment, a global pandemic and plain old EA shenanigans.

Down the rabbit hole

Let's start with a bit of personal history. I was introduced to the Battlefield series with Battlefield 2 in the late 2000s. With no friends to share the experience and being a stranger to the world of multiplayer gaming at that age, I had no choice but to play alone, against AI-controlled bots. To tell the truth, it was a blast.

Today, I don't know how I enjoyed that game as much as I did when I only played against half-witted computer soldiers, but it was great fun at that age to battle it out over gameplay mechanics and map designs that no other game offered, even if it was against bots. Add to that the fact that, with a little tinkering, you could have as many bots as you wished. My gamer heart was enjoying it too much to do 64 bots versus 64 bots battles – a concept we would see in multiplayer decades later with Battlefield 2042, demonstrating how spectacularly it usually fails with real people in the match.

Bad Company 2 was my first foray into the world of multiplayer, and I realized how much fun I had been missing for years. It was also the first time I had seen the new Frostbite engine that DICE had developed and it was something of a beauty.

Battlefield 3 on the other hand was a continuation of that same engine, and it was – and still is – shockingly gorgeous to behold. I had the game's trailer on loop until the launch, and it was the first game I ever preordered – and I have only preordered one other game since then, that being Battlefield 2042. It was an incredible mistake.

So, after that long-winded personal history of my introduction and falling in love with the Battlefield franchise, what made these games so special?

It was with "Battlefield 4" that the phrase "Only in Battlefield" was popularized, and that was exactly it, the perfect way to describe in a simple phrase why this franchise was so special and beloved.

There was – and still is – no other game on the market that offers what Battlefield offers. The expansive maps, the large player counts, the pristine infantry combat combined with armored combat, from tanks to fighter jets to sometimes even naval options, the squad and class systems and the general feel of the game with the graphical beauty being the cherry on top.

No other franchise has combined these elements into an enjoyable package like Battlefield. Call of Duty has always been more about close-quarter, fast-paced infantry battles, Arma has always been about extreme realism. Battlefield was the one that found a sweet spot between realism and high-octane moments of action.

Added to all of that was the introduction of destructibility. This concept would leave all Battlefield fans somewhat disappointed with every future release after Battlefield: Bad Company 2 as they had tasted the enchanting feel of level destructibility on an unprecedented level that they would not get with any of the later Battlefield titles.

However, times were changing, and EA is not about staying true to what made it special when there is money to be made by chasing trends of the day.

I truly believe Battlefield 2042 could have been a success – or at least not a disaster – even with EA's extremely miscalculated judgment calls, if not for one thing: lack of experience. 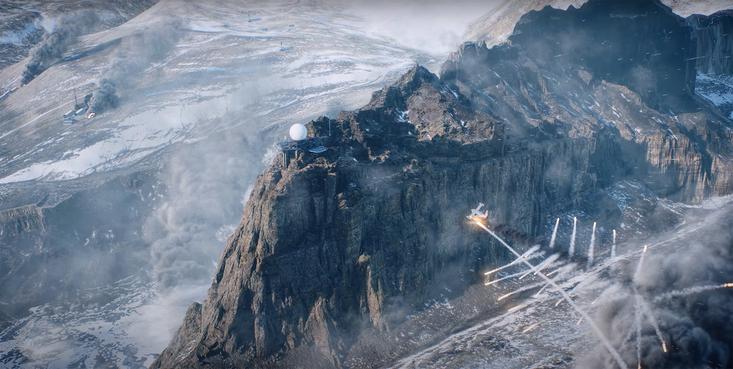 The team that had given the fans most of what they love in the modern Battlefield iterations had almost entirely dissolved, with most leaving DICE due to lack of creative freedom – I know, shocker. So, when Battlefield 2042 was going into pre-production in 2018, it instantly got off to a rocky start.

According to industry insider Tom Henderson, EA was after the new moneymaker of the gaming world: Battle Royale. DICE was told to just copy what was popular. Meanwhile, the Frostbite engine, the heart of so many recent Battlefield games, needed updating. However, with many senior figures in the franchise leaving the studio during Battlefield V's development, DICE was left with inexperienced developers with limited knowledge of the franchise and the engine, so an upgrade that was supposed to take six months turned into 18 months.

As development continued, EA was given even more reasons to steer away from the core of Battlefield as Apex Legends – developed by Respawn Entertainment, which was acquired by EA – with its purchasable characters, launched to incredible success, and Call of Duty franchise's "specialists" – again, playable characters available for purchase – had proven stunningly profitable for Activision. So, EA pushed harder for these trends to be implemented in Battlefield.

Then, something no one was counting on happened.

The global COVID-19 pandemic struck the world unexpectedly, and like everything, it affected the game industry in unprecedented ways. Developers now had to work from home, which presented numerous problems, including the fact that not everyone had access to the equipment necessary for game development at the scale of Battlefield 2042 at home. The inexperience of the staff became even more of an issue as junior developers could not learn the ins and outs of everything effectively while working remotely.

The decision had come down from EA and DICE to shift to a more traditional Battlefield game, but as time proved, it was maybe too little too late. The damage was already done, the class system that had been with the franchise since its conception was effectively gone, replaced with "specialists," one of the more telling examples of how EA and DICE were betraying the core elements of Battlefield.

There is only one thing I can say about the official reveal trailer of Battlefield 2042, and that is: Whoever is in charge of making trailers at EA understands the fans' hearts better than the executives and developers. The trailer, set to the incredible tune of Mötley Crüe's "Kickstart my Heart" as covered by 2WEI, was an instant and huge success, leading fans – including myself – to wishful dreams of a great Battlefield game.

Of course, behind the scenes things were rough. The game's post-production had started in August of 2020, and EA slated it for a fall 2021 release, which meant that the developers had only one year and three months to complete the game, a timeframe that was one of the shortest in franchise history. When coupled with inexperience and a global pandemic, it was sure to fail spectacularly.

Around the time the trailer dropped, DICE was scrambling to put together something that would be at least somewhat playable at launch, according to Henderson, calling out for help from anyone and everyone.

The situation was obvious when the time came for the Open Beta – a play test open to the general public – of the game. I had preordered the game because I couldn't help myself. After a decade since Battlefield 3, I was once again looking forward to the release of a video game. When I played the beta, it was clear that I needed to get out of fantasy land and reality-check myself, but I continued to hope.

Until the game was released, of course.

It's not in the game

What was missing? Well, what wasn't missing would be an infinitely shorter list.

To start with, the decision to expand the player count from 64 to 128 was such a poorly implemented feature. Matches were nothing but chaos, with enemy fire coming from all directions. The maps were huge but they were so badly designed, or rather unfinished, that most of the time you were left to run to where the action was happening. Meanwhile, the map design did not account for 128 players running around, there was so little in the name of cover. The servers could not handle 128 players as well, with frequent performance issues.

The balance was all over the place. Vehicles were given such power that one player in a helicopter, or in an armored vehicle could handle an entire server. There were only seven maps and a mere 22 weapons. Content-wise the game was so lacking that after only a week one would get bored.

I – and most of the player base – was not fond of the specialists, especially given how heavily their characters and voice lines clashed with the tone that the game, its backstory and promotional material tried to convey. This was supposed to be a dark and gritty world, riddled with war and climate disasters, while at the end of matches specialist characters would swagger about cheerfully, bragging about their dominance over the match.

Destruction was minimal, and the tornados – the big flashy new feature of the game – were underwhelming at best, and it got old very fast.

On top of all that, the game was made in such a rush that there would not be a match, or just five minutes, where you would not encounter a game-breaking bug.

I could go on and on over how disappointing the experience was, but I suspect you get the idea and I don't wish to rant any longer.

Through the looking glass

DICE recently released its first big update to the game in months, and what did they add? A redesigned scoreboard. I think that says it all about the state of Battlefield 2042.

If experienced developers, senior figures that have been with the franchise for years, were still leading the line at this game, I would continue to maintain my hope that it could turn around. However, the obvious lack of experience at DICE has put me in a fearful state.

The game right now has so few players playing it that online matches are often filled with bots – I'm getting flashbacks to my Battlefield 2 phase, which I have grown out of – and the announcement that no new content would be coming to the game until at least summer, has meant that there is nothing left in Battlefield 2042 at the moment to draw players in.

It would be fair to write this game off, and patiently wait for another Battlefield title down line a couple of years later, but I'm not sure that would make a wait worthwhile. With DICE trying to rediscover itself and EA learning nothing and continuing to chase money rather than customer satisfaction, the next Battlefield game is sure to disappoint just like the last one, and the one before that.

It feels melancholic to write and think about this matter because Battlefield has been such a unique franchise, and its fading into shadows leaves an itch in so many players that no games can scratch.

I'll see you in our next TEA session.

Tags： how to play electronic naval battle game
Latest： Getting Back On Top: How to Rebuild the Navy
Next： Navy Aviation Vision 2030-2035
Popular Articles/span>